Where are constant variables stored in C?

I wonder where constant variables are stored. Is it in the same memory area as global variables? Or is it on the stack?

How they are stored is an implementation detail (depends on the compiler).

For example, in the GCC compiler, on most machines, read-only variables, constants, and jump tables are placed in the text section.

Depending on the data segmentation that a particular processor follows, we have five segments:

Note that the difference between the data and BSS segments is that the former stores initialized global and static variables and the later stores UNinitialised ones.

Now, Why am I talking about the data segmentation when I must be just telling where are the constant variables stored... there's a reason to it...

Every segment has a write protected region where all the constants are stored.

To summarize, "const" is just a data QUALIFIER, which means that first the compiler has to decide which segment the variable has to be stored and then if the variable is a const, then it qualifies to be stored in the write protected region of that particular segment.

Generally, i can be stored in the text segment (it's a read-only variable with a fixed value). If it is not in the text segment, it will be stored beside the global variables. Given that it is initialized to zero, it might be in the 'bss' section (where zeroed variables are usually allocated) or in the 'data' section (where initialized variables are usually allocated).

If the compiler is convinced the k is unused (which it could be since it is local to a single file), it might not appear in the object code at all. If the call to totherfunc() that references k was not commented out, then k would have to be allocated an address somewhere - it would likely be in the same segment as i.

The constant (if it is a constant, is it still a variable?) j will most probably appear on the stack of a conventional C implementation. (If you were asking in the comp.std.c news group, someone would mention that the standard doesn't say that automatic variables appear on the stack; fortunately, SO isn't comp.std.c!)

Note that I forced the variables to appear because I passed them by reference - presumably to a function expecting a pointer to a constant integer. If the addresses were never taken, then j and k could be optimized out of the code altogether. To remove i, the compiler would have to know all the source code for the entire program - it is accessible in other translation units (source files), and so cannot as readily be removed. Doubly not if the program indulges in dynamic loading of shared libraries - one of those libraries might rely on that global variable.

(Stylistically - the variables i and j should have longer, more meaningful names; this is only an example!)

Depends on your compiler, your system capabilities, your configuration while compiling.

Usually they are stored in read-only data section (while global variables' section has write permissions). So, trying to modify constant by taking its address may result in access violation aka segfault.

But it depends on your hardware, OS and compiler really.

1) bss segment stored non inilized variables it obviously another type is there.

2) data segment is initlaized variables it has 3 types ,

but my doubt is local constant are where it will stroe??????

This is mostly an educated guess, but I'd say that constants are usually stored in the actual CPU instructions of your compiled program, as immediate data. So in other words, most instructions include space for the address to get data from, but if it's a constant, the space can hold the value itself.

This is specific to Win32 systems. 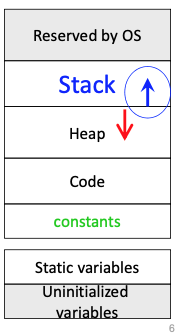 It's compiler dependence but please aware that it may not be even fully stored. Since the compiler just needs to optimize it and adds the value of it directly into the expression that uses it.

I add this code in a program and compile with gcc for arm cortex m4, check the difference in the memory usage.

Global and constant are two completely separated keywords. You can have one or the other, none or both.

Where your variable, then, is stored in memory depends on the configuration. Read up a bit on the heap and the stack, that will give you some knowledge to ask more (and if I may, better and more specific) questions.

It may not be stored at all.

This enables the programmer to gather the idea of what is going on, but the compiler can optimize away some of that, and most compilers do, by evaluating constant expressions at compile time, which means that the value PI may not be in the resulting program at all.

Just as an an add on ,as you know that its during linking process the memory lay out of the final executable is decided .There is one more section called COMMON at which the common symbols from different input files are placed.This common section actually falls under the .bss section.

Some constants aren't even stored.

Chances are that the compiler will turn the multiplication into x = x+x; as that reduces the need to load the number 2 from memory.

0
Where in memory the const function parameters are stored in C?
1
where is const stored in the memory layout when declared as local or global in C
0
Where located a const value?
3
Why the location pointed by a pointer to const is assignable by other variable?
3
How are constant stored in memory in C?
3
const variable in c++
2
Does a const in C always occupy storage?
1
Where the value of variables are stored in C
1
Where is the const& args stored?
2
Where is the string stored with functions that return a hard-coded string literal?
See more linked questions

9017
What and where are the stack and heap?
1172
Are there constants in JavaScript?
2156
What is the scope of variables in JavaScript?
1163
How do I use extern to share variables between source files?
3217
Improve INSERT-per-second performance of SQLite
1279
How do I create a constant in Python?
959
Why should C++ programmers minimize use of 'new'?
194
Where in memory are my variables stored in C?
866
Set environment variables from file of key/value pairs
1573
Compiling an application for use in highly radioactive environments