I am modeling a loop in an UML activity diagram. It works well with simple condition nodes (diagram 1), but I am looking for a more expressive way to emphasise the loop semantic. So I came to "regions" or "interruptible regions" which are shown here and there, but I couldn't find many really satisfying examples.

My example is a function which processes messages of a given list. The loop aborts as soon as the first valid message is found, then the message is processed and the function returns true. Otherwise, it returns false (please no comments on sense or nonsense, it's only for the sake of a sample).

Diagram 1: uses a good old activity diagram conditional node. It is easier to follow the control flow along the arrows, admittedly, but there is no "The LOOP", there is just an "if".

The functionality of both diagrams should be equivalent: 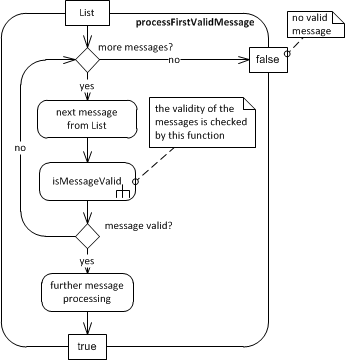 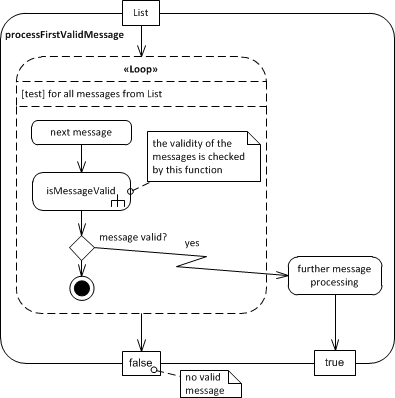 Edit: Another diagram which implements the suggestions from Steph: 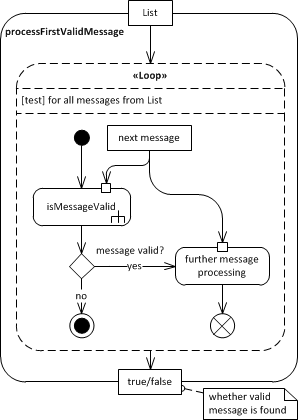 In UML, the activity final node represents a completion, so it is correct in a loop region as you use it, it is the normal completion of the content of your loop (which in turns leads to the next iteration). As a side note, I advise you to also use an initial node for the beginning of your loop.

And there is also the flow final node, that represents an exit, instead of a completion. Thus, you can use it to represent the "break" statement, instead of the interrupting edge you use. In this case you have to integrate the "further message processing node", in the "yes" branch, just before this flow final node.

The interrupting edge is rather for interruptions coming from outside the current processing. The region is interruptible, and some events (usually noted with receive nodes) may completely interrupt it no matter the progress of the region content. Here it is not the case.

Concerning the iterating character, there is nothing very visual, unfortunately. I tend to use an object node on top of the region, just beside the initial node.

Not the answer you're looking for? Browse other questions tagged loops android-activity uml or ask your own question.

2820
How can I save an activity state using the save instance state?
1449
Activity restart on rotation Android
2009
Why is using "for...in" for array iteration a bad idea?
3420
How do I loop through or enumerate a JavaScript object?
1763
How to loop through a plain JavaScript object with the objects as members
3102
How to stop EditText from gaining focus when an activity starts in Android?
920
How to send an object from one Android Activity to another using Intents?
991
How do I create a transparent Activity on Android?
3777
Loop through an array in JavaScript
857
Dilemma: when to use Fragments vs Activities: