However, I would like to get the image width and height without having to load the image in memory. Is that possible? I am only doing statistics on image sizes and dont care for the image contents. I just want to make my processing faster.

If you don't care about the image contents, PIL is probably an overkill.

I suggest parsing the output of the python magic module:

This is a wrapper around libmagic which read as few bytes as possible in order to identify a file type signature.

I can see why: in order to get the image dimensions for JPEG files, you may have to read more bytes than libmagic likes to read.

Rolled up my sleeves and came with this very untested snippet (get it from GitHub) that requires no third-party modules. 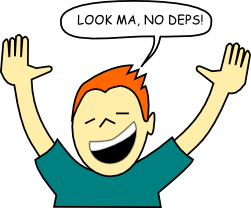 Check out a Rust implementation: https://github.com/scardine/imsz

As the comments allude, PIL does not load the image into memory when calling .open. Looking at the docs of PIL 1.1.7, the docstring for .open says:

There are a few file operations in the source like:

but these hardly constitute reading the whole file. In fact .open simply returns a file object and the filename on success. In addition the docs say:

Opens and identifies the given image file.

This is a lazy operation; this function identifies the file, but the actual image data is not read from the file until you try to process the data (or call the load method).

Digging deeper, we see that .open calls _open which is a image-format specific overload. Each of the implementations to _open can be found in a new file, eg. .jpeg files are in JpegImagePlugin.py. Let's look at that one in depth.

Here things seem to get a bit tricky, in it there is an infinite loop that gets broken out of when the jpeg marker is found:

Which looks like it could read the whole file if it was malformed. If it reads the info marker OK however, it should break out early. The function handler ultimately sets self.size which are the dimensions of the image.

There is a package on pypi called imagesize that currently works for me, although it doesn't look like it is very active.

I often fetch image sizes on the Internet. Of course, you can't download the image and then load it to parse the information. It's too time consuming. My method is to feed chunks to an image container and test whether it can parse the image every time. Stop the loop when I get the information I want.

I extracted the core of my code and modified it to parse local files.

The OP was interested in a "faster" solution, I was curious about the fastest solution and I am trying to answer that with a real-world benchmark.

I am running the following code on 202897 mostly JPG files.

So the opsdroid, shibukawa and kobaltcore perform at the same speed. Another interesting point for me would now be to better understand which of the libraries has the best format support.

[EDIT] So I went ahead and tested if the fast libraries provide different results:

Another short way of doing it on Unix systems. It depends on the output of file which I am not sure is standardized on all systems. This should probably not be used in production code. Moreover most JPEGs don't report the image size.

0
How to read only image width and height in python, without reading the data?
386
How do I get the picture size with PIL?
78
How to obtain image size using standard Python class (without using external library)?
17
Numpy and 16-bit PGM
7
python imageio image size without loading image to memory
1
Use Python to find the resolution of image with any image file extension without using any non-default library
1
Efficient way to delete image of the same size
1
Check aspect ratio of image stored on an FTP server without downloading the file in Python

1370
Strange OutOfMemory issue while loading an image to a Bitmap object
701
How to get image size (height & width) using JavaScript?
1451
How do I get the filename without the extension from a path in Python?
238
How do you stretch an image to fill a <div> while keeping the image's aspect-ratio?
41
Get the Size of a CSS Background Image Using JavaScript?
511
CSS Image size, how to fill, but not stretch?
1451
Changing image size in Markdown
103
CSS: How can I set image size relative to parent height?
2
Extract image into a file from PDImageXObject without loading it into memory