Find if an angle is within X degrees from another

I need an algorithm to figure out if one angle is within a certain amount of degrees from another angle. 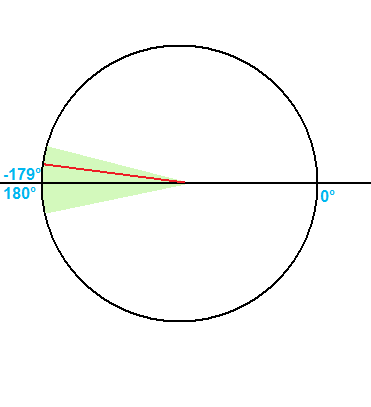 In the diagram above, the region (green) that the angle must be between wraps between the negative and positive sides. How can I determine whether the angle (the red line) falls inside this region?

As Marcel rightly points out, modulo on negative numbers is potentially problematic. Also, what is the difference between 355 and 5 degrees? It might be worked out to be 350 degrees but 10 degrees is probably what people are expecting. We make the following assumptions:

Inputs: angles a and b. So the algorithm is simply:

For the first step, to convert the angle to the desired range, there are two possibilities:

The second is designed to remove any ambiguity on the difference in interpretation of negative modulus operations. So to give a worked example for x = -400:

Now we calculate the shortest angle between them. As a sanity check, the sum of those two angles must be 360. In this case the possibilities are 50 and 310 (draw it and you'll see this). To work these out:

So for our example:

You can also use a dot product:

For a radius of 1, the distance between the line endpoints is 2sin((a-b/2). So throw away the 2 since you are only interested in a comparison, and compare sin(x/2) with sin((a-b)/2). The trig functions take care of all the wrapping.

Not the answer you're looking for? Browse other questions tagged algorithm language-agnostic geometry angle or ask your own question.

139
The smallest difference between 2 Angles
1176
Easy interview question got harder: given numbers 1..100, find the missing number(s) given exactly k are missing
1
Problems detecting 180 degree rotation
1705
Image Processing: Algorithm Improvement for 'Coca-Cola Can' Recognition
925
How to find time complexity of an algorithm
3959
How can I pair socks from a pile efficiently?
0
Head tracking angle using accelerometer
1
Signed angle between directed line segments
2
how to get angle in javascript between two points
1
Given points A, B, and C, how to determine whether both angles ABC and ACB are acute?