unable to remove file that really exists - fatal: pathspec … did not match any files

unable to remove file that really exists - fatal: pathspec ... did not match any files

I have a file under git control that simply will not be deleted. The failing command is:

Below I list the directory contents, branches, etc. So far I've tried rm from within the directory, and escaping just in case there are funny characters, and I'm really stumped. I searched the web and SO but couldn't find this specifically. Thanks in advance!

UPDATE: Answers from Nevik and Boris helped a lot. I realized that I was confused by a number of things going on, some of which were exacerbated by IntelliJ IDEA (a tool I generally love, BTW). First, the 'fatal: pathspec' message from git rm is both unhelpful and misleading (in this vanilla user's opinion). Second, I had the file in .gitignore, but had removed it before asking my question. However, it was also included in IDEA's Ignored Files feature independently of git, and showed as such in the project viewer (instead of untracked, as git status showed). Finally, I had IDEA running while I was experimenting, and it looks like it was recreating the file immediately after my rm. So, my takeaway is that if I'm getting confusing Git behavior, make sure to quit IDEA and work soley in the command line (and gitk) while debugging. And that SO users are awesome. Thanks again!

Your file .idea/workspace.xml is not under git version control. You have either not added it yet (check git status/Untracked files) or ignored it (using .gitignore or .git/info/exclude files)

You can verify it using following git command, that lists all ignored files:

It works. You add new file using right click -> create new file, and immediately delete it after that. The file would go to the untracked file list.

I know this is not the OP's problem, but I ran into the same error with an entirely different basis, so I just wanted to drop it here in case anyone else has the same. This is Windows-specific, and I assume does not affect Linux users.

When I eventually went to git rm "Final Report.odt" and got the "pathspec did not match any files" error. Only when I use the original casing at the time the file was added -- git rm "final report.odt" -- did it work.

Lesson learned: to change the case I should have instead done:

Again, that wasn't the problem for the OP here; and wouldn't affect a Linux user, as his posts shows he clearly is. I'm just including it for others who may have this problem in Windows git and stumble onto this question.

If your file idea/workspace.xml is added to .gitignore (or its parent folder) just add it manually to git version control. Also you can add it using TortoiseGit. After the next push you will see, that your problem is solved. 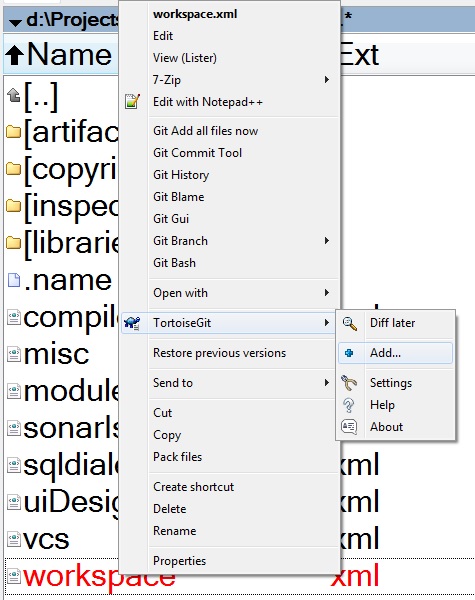 In my instance, there was something completely odd that I'm not sure what the cause was. An entire folder was committed previously. I could see it in Git, Windows Explorer, and GitHub, but any changes I made to the folder itself and the files in it were ignored. Using git check-ignore to see what was ignoring it, and attempting to remove it using git rm --cached had no impact. The changes were not able to be staged.

I fixed it by:

Personally I stumbled on a similar error message in this scenario:

I created a folder that has been empty, so naturally as long as it is empty, typing git add * will not take this empty folder in consideration. So when I tried to run git rm -r * or simply git rm my_empty_folder/ -r, I got that error message.

The solution is to simply remove it without git: rm -r my_empty_folder/ or create a data file within this folder and then add it (git add my_no_long_empty_folder)

65
git rm - fatal: pathspec did not match any files
28
Remove weird 'Iconr' file from the repository
6
Replace GitHub repository with a new Android Studio project while preserving old commits
2
Git has no idea files are the repository. I cannot remove them
1
Git ignore and untrack file [Yes I already readed the other posts]