How does direct mapped cache work?

I am taking a System Architecture course and I have trouble understanding how a direct mapped cache works.

I have looked in several places and they explain it in a different manner which gets me even more confused.

What I cannot understand is what is the Tag and Index, and how are they selected?

The explanation from my lecture is: "Address divided is into two parts index (e.g 15 bits) used to address (32k) RAMs directly Rest of address, tag is stored and compared with incoming tag. "

Where does that tag come from? It cannot be the full address of the memory location in RAM since it renders direct mapped cache useless (when compared with the fully associative cache).

Thank you very much.

Okay. So let's first understand how the CPU interacts with the cache.

There are three layers of memory (broadly speaking) - cache (generally made of SRAM chips), main memory (generally made of DRAM chips), and storage (generally magnetic, like hard disks). Whenever CPU needs any data from some particular location, it first searches the cache to see if it is there. Cache memory lies closest to the CPU in terms of memory hierarchy, hence its access time is the least (and cost is the highest), so if the data CPU is looking for can be found there, it constitutes a 'hit', and data is obtained from there for use by CPU. If it is not there, then the data has to be moved from the main memory to the cache before it can be accessed by the CPU (CPU generally interacts only with the cache), that incurs a time penalty. 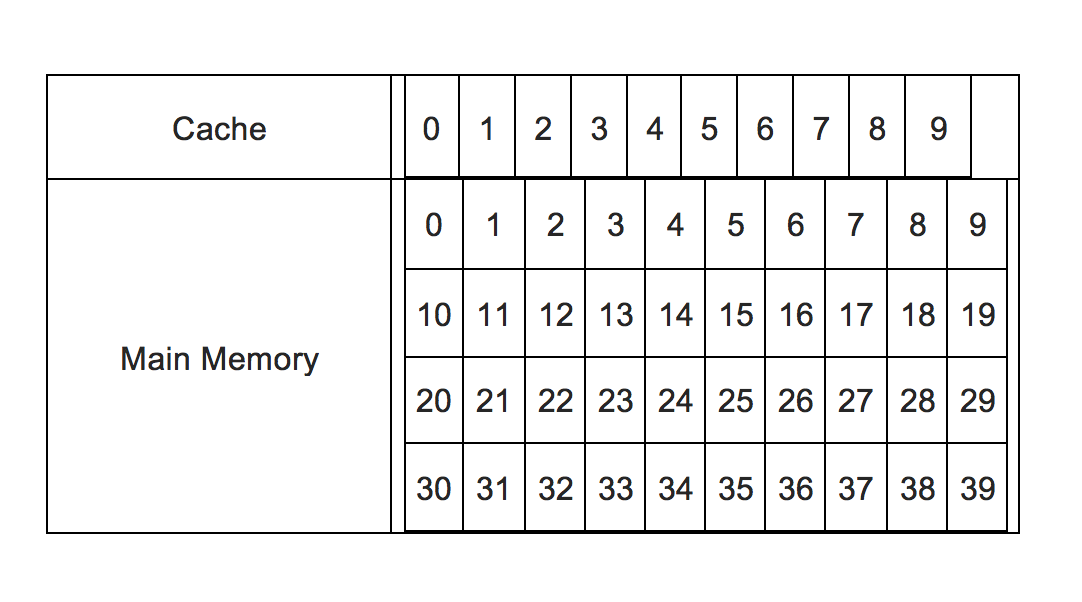 There are 40 main memory locations available, but only upto 10 can be accommodated in the cache. So now, by some means, the incoming request from CPU needs to be redirected to a cache location. That has two problems:

So now if a request comes for address location 29, that will translate to a tag of 2 and index of 9. Index corresponds to cache location number, so cache location no. 9 will be queried to see if it contains any data, and if so, if the associated tag is 2. If yes, it's a CPU hit and the data will be fetched from that location immediately. If it is empty, or the tag is not 2, it means that it contains the data corresponding to some other memory address and not 29 (although it will have the same index, which means it contains a data from address like 9, 19, 39, etc.). So it is a CPU miss, and data from location no. 29 in main memory will have to be loaded into the cache at location 29 (and the tag changed to 2, and deleting any data which was there before), after which it will be fetched by CPU.

Lets use an example. A 64 kilobyte cache, with 16 byte cache-lines has 4096 different cache lines.

You need to break the address down into three different parts.

The number of bits you use for the index is log_base_2(number_of_cache_lines) [it's really the number of sets, but in a direct mapped cache, there are the same number of lines and sets]

A direct mapped cache is like a table that has rows also called cache line and at least 2 columns one for the data and the other one for the tags.

I emphasized a little on data access and tag access+compare happens at the same time, because that is key to reduce the latency (purpose of a cache). The data path ram access doesn't need to be two steps.

The advantage is that a read is basically a simple table lookup and a compare.

But it is direct mapped that means for every read address there is exactly one place in the cache where this data could be cached. So the disadvantage is that a lot of other addresses would be mapped to the same place and may compete for this cache line.

I have found a good book at the library that has offered me the clear explanation I needed and I will now share it here in case some other student stumbles across this thread while searching about caches.

The book is "Computer Architecture - A Quantitative Approach" 3rd edition by Hennesy and Patterson, page 390.

Where can a block be placed in a cache?

So, let's assume we have 32 blocks of RAM and 8 blocks of cache.

If we want to store block 12 from RAM to the cache, RAM block 12 would be stored into Cache block 4. Why? Because 12 / 8 = 1 remainder 4. The remainder is the destination block.

Basically, a set is a group of blocks in the cache. A block is first mapped onto a set and then the block can be placed anywhere inside the set.

The formula is: <RAM Block Address> MOD <Number of Sets in the Cache>

Now I'll go back to my original problem with the addresses.

How is a block found if it is in the cache?

Each block frame in the cache has an address. Just to make it clear, a block has both address and data.

The block address is divided into multiple pieces: Tag, Index and Offset.

The tag is used to find the block inside the cache, the index only shows the set in which the block is situated (making it quite redundant) and the offset is used to select the data.

By "select the data" I mean that in a cache block there will obviously be more than one memory locations, the offset is used to select between them.

So, if you want to imagine a table, these would be the columns:

Tag would be used to find the block, index would show in which set the block is, offset would select one of the fields to its right.

I hope that my understanding of this is correct, if it is not please let me know.

Not the answer you're looking for? Browse other questions tagged caching system cpu-architecture or ask your own question.

1
How many bits are in the address field for a directly mapped cache?
-1
Did I understand the meaning of a “cache line”, “tag”, “page”, “frame”, “block” correctly?
0
how to calculate the number of bits required to address a word in direct mapped cache