What is the difference between a .war and .ear file?

In J2EE application, modules are packaged as EAR, JAR, and WAR based on their functionality

EAR: All the above files (.jar and .war) are packaged as a JAR file with .ear (enterprise archive) extension and deployed into Application Server.

The Web container hosts Web applications based on JSP or the Servlets API - designed specifically for web request handling - so more of a request/response style of distributed computing. A Web container requires the Web module to be packaged as a WAR file - that is a special JAR file with a web.xml file in the WEB-INF folder.

An EJB container hosts Enterprise java beans based on the EJB API designed to provide extended business functionality such as declarative transactions, declarative method level security and multiprotocol support - so more of an RPC style of distributed computing. EJB containers require EJB modules to be packaged as JAR files - these have an ejb-jar.xml file in the META-INF folder.

Basically, EAR files are a superset containing WAR files and JAR files. Java Application Servers allow deployment of standalone web modules in a WAR file, though internally, they create EAR files as a wrapper around WAR files. Standalone web containers such as Tomcat and Jetty do not support EAR files ― these are not full-fledged Application servers. Web applications in these containers are to be deployed as WAR files only.

war - web archive. It is used to deploy web applications according to the servlet standard. It is a jar file containing a special directory called WEB-INF and several files and directories inside it (web.xml, lib, classes) as well as all the HTML, JSP, images, CSS, JavaScript and other resources of the web application

ear - enterprise archive. It is used to deploy enterprise application containing EJBs, web applications, and 3rd party libraries. It is also a jar file, it has a special directory called APP-INF that contains the application.xml file, and it contains jar and war files.

There may be other things in those files but their basically meant for what they sound like they mean: WAR for web-type stuff, EAR for enterprise-type stuff (WARs, code, connectors et al).

A JAR (short for Java Archive) file permits the combination of several files into a single one. Files with the '.jar'; extension are utilized by software developers to distribute Java classes and various metadata. These also hold libraries and resource files, as well as accessory files (such as property files).

JAR files have optional manifest files. Entries within the manifest file prescribe the JAR file's use. A 'main' class specification for a file class denotes the file as a detached or ‘stand-alone' program.

A WAR (or Web Application archive) files can comprise XML (extensible Markup Language) files, Java classes, as well as Java Server pages for purposes of Internet application. It is also employed to mark libraries and Web pages which make up a Web application. Files with the ‘.war' extension contain the Web app for use with server or JSP (Java Server Page) containers. It has JSP, HTML (Hypertext Markup Language), JavaScript, and various files for creating the aforementioned Web apps.

A WAR file is structured as such to allow for special directories and files. It may also have a digital signature (much like that of a JAR file) to show the veracity of the code.

An EAR (Enterprise Archive) file merges JAR and WAR files into a single archive. These files with the ‘.ear' extension have a directory for metadata. The modules are packaged into on archive for smooth and simultaneous operation of the different modules within an app server.

The EAR file also has deployment descriptors (which are XML files) which effectively dictate the deployment of the different modules. 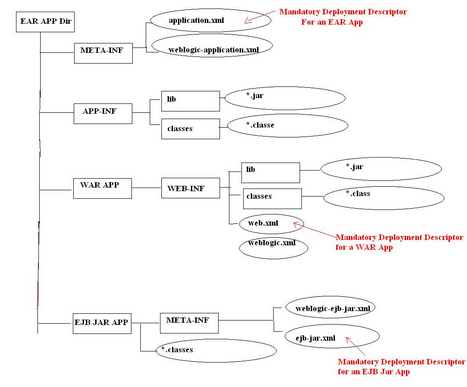 tar (tape archives) - Format used is file written in serial units of fileName, fileSize, fileData - no compression. can be huge

ear (enterprise archives) - similar like jar files. have directory structure following J2EE requirements so that it can be deployed on J2EE application servers. - can contain multiple JAR and WAR files

Ear files provide more options to configure the interaction with the application server.

For example: if the hibernate version of the application server is older than the one provided by your dependencies, you can add the following to ear-deployer-jboss-beans.xml for JBOSS to isolate classloaders and avoid conflicts:

This will make sure that there is no classloader conflict between your application and the application server.

By isolating the classloaders, your ear classloader will not look in the parent (=JBoss / other AS classloader). As far is I know, this is not possible with war files.

To make the project transport, deployment made easy. need to compressed into one file. JAR (java archive) group of .class files

Not the answer you're looking for? Browse other questions tagged java jakarta-ee deployment or ask your own question.

-2
Practical examples for WAR and EAR
0
Scenarios for more than one WAR file in an EAR
1
How can choose between war/jar/ear packagings i can't get the diffrence between them, i'm working on a microservice architecture with spring boot
17
Java EE Application with Web Server + Application Server
19
Packaging Facelets files (templates, includes, composites) in a JAR
14
OSGi - How mature is this technology?
16
Why use an ear instead of a war?
6
WAR vs EAR for web application with no EJB?
3
Would it be considered bad practice to bundle a small Java EE app with EJB's in one war file?
0
Why do we need WAR? if we can create JAR and deploy it on servlet container
See more linked questions

3997
What are the differences between a HashMap and a Hashtable in Java?
7123
Is Java “pass-by-reference” or “pass-by-value”?
1884
Java inner class and static nested class
4358
How do I read / convert an InputStream into a String in Java?
1647
Difference between StringBuilder and StringBuffer
2229
“implements Runnable” vs “extends Thread” in Java
1009
Difference between HashMap, LinkedHashMap and TreeMap
2009
What is a JavaBean exactly?
7183
Why is subtracting these two times (in 1927) giving a strange result?
25703
Why is processing a sorted array faster than processing an unsorted array?