Am developing an existing iOS application and I have to write unit test cases for this project. It is building and running in Simulator 6.0. Whenever I try to test the project, it is showing the error message below. Am not able to figure the exact error.

Could you please help me to solve this linker error and test the app?

Where the problem came from:

I changed my product name and disabled the snapshot option. Then, suddenly, this error popped out:

Steps I followed unsuccessfully to debug:

I encountered the same error message. Turned out I had renamed my app target and had not updated the test target, Build Settings, Bundle Loader setting to my new app name.

More details on this setting can be found at Adding Unit Tests to an existing iOS project with Xcode 4 I reviewed the same steps and it helped me fix my project in Xcode 5.

You must have changed your product name. Due to mis-match of your workspace name and product(application)name this error occurs. 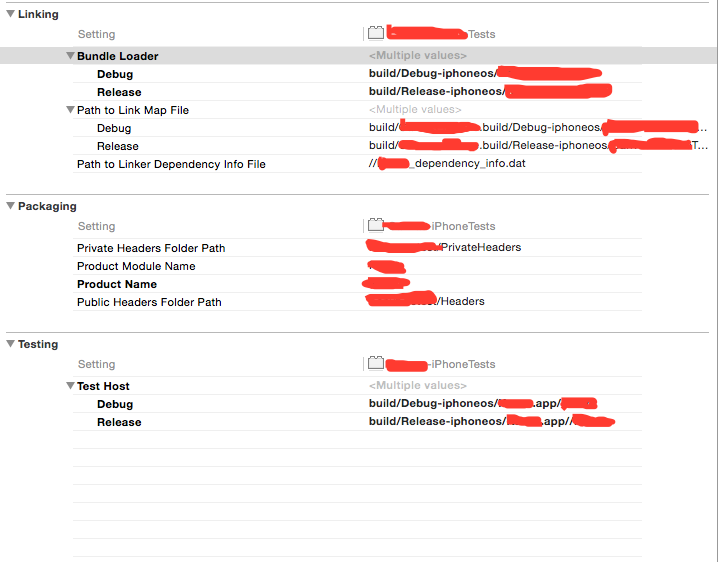 This is the standard configuration solution for this error.

Delete your scheme then re-create it (click new icon or using autocreate of xcode). It works for me.

ARGH! This is a terribly frustrating issue that came out of the blue from my XCode 8.2

In my case it came down to removing my Tests target from the scheme, building and running the main app, then readding the Tests target to the 'Test' section.

It appears that the Tests target was trying to find something it wanted in the Derived Data which wasn't built yet. Running the app without trying to build tests too allowed the previously missing derived data to be prepared.

Your linker is looking for a file at: /Users/Yuva/Library/Developer/Xcode/DerivedData/FlyApp-aexukpgtbathuadgxlnm/Build/Products/Debug-iphonesimulator/FlyApp.app/FlyApp

Did you follow the path to ascertain if the file is there? Note that FlyApp.app is probably a package and you'll have to "see package contents" if you're viewing from the Finder. If it's not there, either 1) you need to build FlyApp.app first, or 2) you have something in your test code that depends on it being there, which can't be determined from your question.

The answer lies on your Build Settings > Library Search Paths entry. Make sure there are no fully qualified paths listed there. Decorate them with the $SRCROOT idiom and enclose the path with double quotes. If there are any escape backslashes make sure to remove them as well.

Do a Clean and then Build and you should be back in business. This seem to be an issue with Xcode 5.x

Create a new scheme. The bundle id / target name / executable / project name etc. are all slightly different concepts. If you change one (as I did) the old scheme may still be set to look for the old value as the name of the executable, while the build process may have been updated to no longer build that executable.

this worked for me. Image

Not the answer you're looking for? Browse other questions tagged ios unit-testing linker-errors file-not-found or ask your own question.