What are the lengths of Location Coordinates, latitude and longitude? [closed]

How many digits can latitude and longitude have, before the decimal, and after the decimal?

Here is an example I am getting from the location sent by a Windows Phone device:

This is very long and is exceeding my table column size and causes errors.

Six (6) decimal places precision in coordinates using decimal degrees notation is at a 10 cm (or 0.1 meters) resolution. Each .000001 difference in coordinate decimal degree is approximately 10 cm in length. For example, the imagery of Google Earth and Google Maps is typically at the 1-meter resolution, and some places have a higher resolution of 1 inch per pixel. One meter resolution can be represented using 5 decimal places so more than 6 decimal places are extraneous for that resolution. The distance between longitudes at the equator is the same as latitude, but the distance between longitudes reaches zero at the poles as the lines of meridian converge at that point.

In the other direction, whole decimal degrees represent a distance of ~111 km (or 60 nautical miles) and a 0.1 decimal degree difference represents a ~11 km distance.

Here is a table of # decimal places difference in latitude with the delta degrees and the estimated distance in meters using 0,0 as the starting point.

Here is an amusing comic strip about coordinate precision.

So if you want to work with Coordinates in your projects you would need DECIMAL(10,7) ie. for SQL.

Latitudes are supposed to be from -90 degrees to 90 degrees, but areas very near to the poles are not indexable.

For example, both columns in Rails and Postgresql looks something like this:

As Jasie said, maximum decimals should be 8 but just a few web services accept that.

The ideal datatype for storing Lat Long values in SQL Server is decimal(9,6)

As others have said, this is at approximately 10cm precision, whilst only using 5 bytes of storage.

I am aware there are already several answers, but I added this, as this adds substantial information about the decimal places and hence the asked maximum length.

The length of latitude and langitude depend on precision. The absolute maximum length for each is:

For both holds: a maximum of 8 decial places is possible (though not commonly used).

Explanation for the dependency on precision: 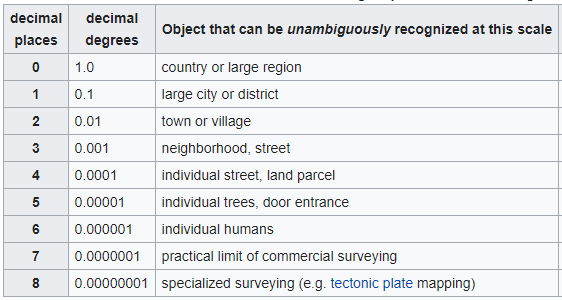 See the full table at Decimal degrees article on Wikipedia

Not the answer you're looking for? Browse other questions tagged database-design latitude-longitude or ask your own question.