Checked out the below already

Abstraction VS Information Hiding VS Encapsulation

difference between abstraction and encapsulation?

I found very hard to understand those concepts with out a real and simple example class/code snippet.

One of my colleagues said abstraction is nothing but creating abstract class and normal class that protects its member variable with scope is called Encapsulation.

Is there a simple way I can understand and help others to understand what exactly they are, rather than repeating the below?

Abstraction and encapsulation are complementary concepts: abstraction focuses on the observable behavior of an object... encapsulation focuses upon the implementation that gives rise to this behavior... encapsulation is most often achieved through information hiding, which is the process of hiding all of the secrets of object that do not contribute to its essential characteristics.

Abstraction is a process where you show only “relevant” data and “hide” unnecessary details of an object from the user. Consider your mobile phone, you just need to know what buttons are to be pressed to send a message or make a call, What happens when you press a button, how your messages are sent, how your calls are connected is all abstracted away from the user.

Encapsulation is the process of combining data and functions into a single unit called class. In Encapsulation, the data is not accessed directly; it is accessed through the functions present inside the class. In simpler words, attributes of the class are kept private and public getter and setter methods are provided to manipulate these attributes. Thus, encapsulation makes the concept of data hiding possible. 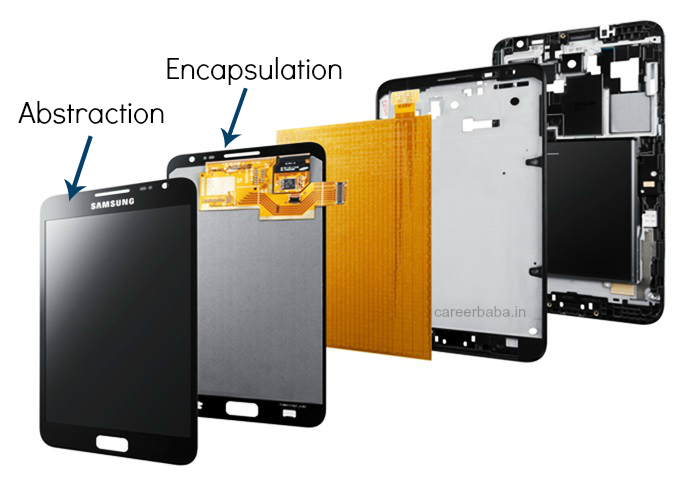 Abstraction is hiding the information or providing only necessary details to the client.

e.g Car Brakes- You just know that pressing the pedals will stop the vehicle but you don't need to know how it works internally.

Advantage of Abstraction Tomorrow if brake implementation changes from drum brake to disk brake, as a client, you don't need to change(i.e your code will not change)

Encapsulation is binding the data and behaviors together in a single unit. Also it is a language mechanism for restricting access to some components(this can be achieved by access modifiers like private,protected etc.)

For e.g. Class has attributes(i.e data) and behaviors (i.e methods that operate on that data)

Any caveman can make a fire, because it implements the IMakeFire 'feature'. Having a group of fire makers (List) this means that both Caveman and PersonWithMatch are valid choises.

So you can have lots of implementors with plenty of details (properties) and behavior(methods), but in this scenario what matters is their ability to make fire. This is abstraction.

Since making a fire requires some steps (GetWood etc), these are hidden from the view as they are an internal concern of the class. The caveman has many other public behaviors which can be called by the outside world. But some details will be always hidden because are related to internal working. They're private and exist only for the object, they are never exposed. This is encapsulation

Abstraction is generalised term. i.e. Encapsulation is subset of Abstraction.

Abstraction is a powerful methodology to manage complex systems. Abstraction is managed by well-defined objects and their hierarchical classification.

For example a car in itself is a well-defined object, which is composed of several other smaller objects like a gearing system, steering mechanism, engine, which are again have their own subsystems. But for humans car is a one single object, which can be managed by the help of its subsystems, even if their inner details are unknown. Courtesy

Encapsulation: Wrapping up data member and method together into a single unit (i.e. Class) is called Encapsulation.

Encapsulation is like enclosing in a capsule. That is enclosing the related operations and data related to an object into that object.

Encapsulation is like your bag in which you can keep your pen, book etc. It means this is the property of encapsulating members and functions.

Encapsulation means hiding the internal details of an object, i.e. how an object does something.

Encapsulation prevents clients from seeing its inside view, where the behaviour of the abstraction is implemented.

Encapsulation is a technique used to protect the information in an object from the other object.

Hide the data for security such as making the variables as private, and expose the property to access the private data which would be public.

So, when you access the property you can validate the data and set it. Courtesy

Well I will explain abstraction with a real world example. Say in your house you do have an electric plug and many devices can connect to the same plug but plug will never have an idea which device it is connected to, in other words the details of the devices is abstracted (hidden) to the plug.

Think what if we connect a device directly to electric wire without a plug? Say connect a bulb directly to a wire, then wire knows which device it is connected to and when ever we need to replace the bulb then we have to remove the wire connection from the bulb, which means bulb is tightly coupled with the wire. In other words bulb and wire knows the details where it is connected to, means not abstracted.

Abstraction is the process where you "throw-away" unnecessary details from an entity you plan to capture/represent in your design and keep only the properties of the entity that are relevant to your domain.
Example: to represent car you would keep e.g. the model and price, current location and current speed and ignore color and number of seats etc.

Encapsulation is the "binding" of the properties and the operations that manipulate them in a single unit of abstraction (namely a class).
So the car would have accelarate stop that manipulate location and current speed etc.

Encapsulation is what it sounds like, a way of putting a box around something to protect its contents. Abstraction is extracting the functional properties of something such that you can perform operations using only what you've extracted without knowledge of the inner workings.

When we say that two substances are liquids we are using "liquid" as an abstraction over the properties of those substances we're choosing to discuss. That abstraction tells us the things we can do with the substances given our previous experience with liquids.

Abstraction also doesn't really have anything to do with heirarchies. You can have another abstraction like "metals" that extracts properties of substances in a different way.

Abstractions forget details, so if you're using a particular abstraction you shouldn't ask about properties of the underlying substance that aren't granted by the abstraction. Like if you take milk and water and mix them together, you have a hard time then asking how much milk you have.

A Functor is an abstraction over something that has some notion of map, that is, you can run a function on its inner contents that transforms the inner bit into anything else. The outer something stays the same kind of thing.

Where this gets useful is that if you have a function that works on Lists and you realise you're only depending on the map interface, you can instead depend on Functor and then your function can work with streams, promises, maybes, tuples, and anything else that shares that abstraction.

You have absolutely no idea what's going on with it beyond what you see with the GUI (graphical user interface) and external hardware (e.g. screen). All those pretty colors and such. You're only presented the details relevant to you as a generic consumer.

Encapsulation is the actual act of hiding the irrelevant details.

You use your computer, but you don't see what its CPU (central processing unit) looks like (unless you try to break into it). It's hidden (or encapsulated) behind all that chrome and plastic.

In the context of OOP (object-oriented programming) languages, you usually have this kind of setup:

Abstraction is a means of hiding details in order to simplify an interface.

So, using a car as an example, all of the controls in a car are abstractions. This allows you to operate a vehicle without understanding the underlying details of the steering, acceleration, or deceleration systems.

A good abstraction is one that standardizes an interface broadly, across multiple instances of a similar problem. A great abstraction can change an industry.

The modern steering wheel, brake pedal, and gas pedal are all examples of great abstractions. Car steering initially looked more like bicycle steering. And both brakes and throttles were operated by hand. But the abstractions we use today were so powerful, they swept the industry.

Encapsulation is a means of hiding details in order to protect them from outside manipulation.

Encapsulation is what prevents the driver from manipulating the way the car drives — from the stiffness of the steering, suspension, and braking, to the characteristics of the throttle, and transmission. Most cars do not provide interfaces for changing any of these things. This encapsulation ensures that the vehicle will operate as the manufacturer intended.

Some cars offer a small number of driving modes — like luxury, sport, and economy — which allow the driver to change several of these attributes together at once. By providing driving modes, the manufacturer is allowing the driver some control over the experience while preventing them from selecting a combination of attributes that would render the vehicle less enjoyable or unsafe. In this way, the manufacturer is hiding the details to prevent unsafe manipulations. This is encapsulation.

encapsulation: binding variables and functions or 1 can say data members or member functions all together in a single unit is called as data encapsulation....

Encapsulation can be thought of as wrapping paper used to bind data and function together as a single unit which protects it from all kinds of external dirt (I mean external functions).

Abstraction involves absence of details and the use of a simple interface to control a complex system.

For example we can light a bulb by the pressing of a button without worrying about the underlying electrical engineering (Abstraction) .

However u cannot light the bulb in any other way. (Encapsulation)

Encapsulation: It is a mechanism, by which we protect our data from outside.

Abstraction is Showing necessary info to the user where as Encapsulation hide the unwanted data from the user(Product from the user).

Abstraction is the process where as Encapsulation actually implements it. For Eg. Adding user logic -> we need to validate the user , creating DB connection and insert the User. So user do not know fist need to call validate function , creating DB connection and then insert the Value in DB. He only call the AddUser function which call the internally all logic with in , this is only Encapsulation (Grouping the feature and hiding the methods).

Encapsulation: I think this is much to do with how you can bind things into one entity rather than hiding. If you choose to hide something you can.

Abstraction: Abstraction is much to do with the hiding things and there could be varied levels of abstraction. For example, in functional abstraction we might say that it is important to be able to add items to a list, but the details of how that is accomplished are not of interest and should be hidden. Using data abstraction, we would say that a list is a place where we can store information, but how the list is actually implemented (e.g., as an array or as a series of linked locations) is unimportant and should be hidden.

Not the answer you're looking for? Browse other questions tagged oop language-agnostic encapsulation abstraction or ask your own question.