How to check in AppleScript if an app is running, without launching it - via osascript utility

The problem: when I run this via the osascript command line utility, if Safari is not running, it gets launched and the script reports "Running". This is not the behaviour I desire or would expect. Note that it works as desired/expected when run within AppleScript Editor.

Is this an osascript bug / known issue? Or is it somehow intended behaviour for reasons I'm missing? Can anyone get it to work as desired? (BTW I'm running OSX 10.7.5; I can't see how to get osascript to report a version number).

If you comment out the tell / end tell lines, it behaves as I'd expect: if Safari is not running, it doesn't launch it, and prints "Not running". So it seems to me like the tell is what's causing Safari to be launched, but it doesn't need to be actually executed, just present in the script...? For a while I wondered if maybe this was just how tell is supposed to work, but since it doesn't work like this in AppleScript Editor, I guess not...

In fact, here's another, madder, version with similar behaviour:

This still always launches Safari, even though tell is inside an if false block after the return statement! (But again, this is fine in AppleScript Editor.)

BTW, this behaviour isn't limited to Safari, but it also isn't universal:

So, does anyone have any ideas about how I might fix or route around this? Is it an osascript bug? Or am I missing something about AppleScript's semantics?

For context: I'm trying to write a script (to be embedded/called from some python) which queries open browsers for the URLs of any tabs they have open; I've got it all working fine except that it always launches Safari, whether it's open or not. I've boiled down that undesirable behaviour to the simple test case shown above. I'm not aware of any way to run this script from python without using osascript, other than appscript, which I don't want to use because it's no longer developed/supported/recommended.

Many thanks for all inputs / insights!

I suspect the reason you are getting this is because each time you call the script from the command line with osascript the script is being compiled.

The act of compiling on a tell application will afaik make the app launch.

Calling the script from the command line with osascript from a pre-compiled file i.e .scpt does not cause this behaviour because the is no compiling to be done.

But calling it from a plain text (.txt,.sh ) file will so the app will launch.

If you do not want to use a .scpt file and want to use a plain text file then you could try the trick of putting a run script command in the applescript.

The script in the run script is only compiled when needed. You will need to escape any characters like quotes as in my example.

It will be easier if you write the script in a normal applescript document first and compiled it to check for errors.

Then copy it to the plain text file.

The method I used above was from a old script I had used to solved this issue a while before I answered here.

The answer works and is not trying to be elegant. ;-)

I actually like user1804762 method below. As it does work but feel the Answer is not clear enough so I will give an example on using it.

This script can be run from the command line with osascript

Notice that the script is saved as a compiled script. This will work ok and you can also save and use it as a plain text script.

You can also do it that way:

You can also do this:

And to complete the journey:

That was the "Enhanced Application Object Model". If an app still launches (for example, the first time you compile & execute the script) I assume it is because AS has to get some info from the app which it did not found in the dictionary (or something like that...?).

OK, I know this question is really old, but I stumbled on it looking for a different issue and had to pipe in considering how complicated some of these responses are.

The simple code to achieve what you want(ed) is:

On older systems, the syntax used to be:

One of these should definitely work for you, intrepid searcher of Applescript solutions for action only when an app is running.

Oh! Bonus tip: And if you're not sure what the application process name is exactly (it is usually but not always the app name), before coding your final script run…

And find your app process name in the results.

Here's a screen grab of running that command. (Note the zillions of Google Chrome Helper instances. Thanks Google!) 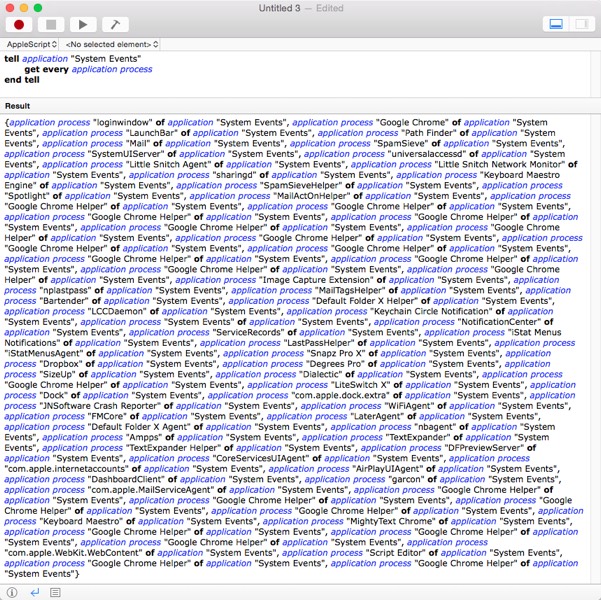 All the previously made answers suffer from the same issue, though:

They look for the app by its name. However, the user may rename the app, and then the script will believe the app does not run, when in fact it does.

To properly check for a running app, it should be found by its bundle ID, which the user cannot change.

The bundle ID can be inquired with this command, for instance, when the app is already running:

To check whether an app with a particular bundle ID is running, use this code:

Furthermore, here's an example to check if an app is running, then quit it, then relaunch it, ensuring that the very same app is relaunched that was running before, and not some other copy that may also exist:

This is returning {"Finder", "JavaAppLauncher", "firefox", "Microsoft Word", "iTunes", "AppleScript Editor"} for me

I had the same problem as described here trying to set up an AppleScript (triggered by a BetterTouchTool gesture) that plays/pauses VLC or iTunes, but only iTunes if VLC is not running (due to my workflow) and, naturally, only VLC while it's running. (I use the automatic pause/play trigger for iTunes in VLC's settings, for launch and quit of the app.)

VLC was always launched on the first use of the BetterTouchTool-trigger after every relaunch of BTT as the dictionary-cache is deleted at that point and the AppleScript handler has to launch every scripted application if a tell is aimed at it in order to call its dictionary.

I didn't find anything that avoided this anywhere; there were some attempts, but none worked for me as the dictionary-call by the script handler is nothing we can influence. I came up with this dirty workaround:

VLC will need to launch once that separate file is called, but, well, if you call that file in order to tell VLC something, you will have VLC already opened (or will want it open) anyway.

The AppleScript I call through my BetterTouchTool-trigger (a specific tap on the trackpad, in my case) looks like this:

end if if application "VLC" is running then run script "/Users/jannis/bin/PlayVLC.scpt" end if

The separate AppleScript file ("PLayVLC.scpt, saved in a folder called "bin" in my user folder which I created manually ages ago for such purposes) is just this:

If you open that script manually, it will of course also launch VLC. But that hopefully won't be necessary often, or ever.

I actually have no idea if this creates any deeper problems I don't know of as I'm not a pro coder; if so, please notify me. I hope this helps anyone!

Not the answer you're looking for? Browse other questions tagged macos safari applescript osascript or ask your own question.

4
How to use an Applescript app bundle as the default browser in os x?
5
Can an applescript "tell" call execute without visibly launching the application?
0
How to check whether app is running using [[NSAppleScript alloc] initWithSource:
1
How to enumerate running/open apps in app order with applescript?
0
Why does the safari app gets launched when I open apple script?
1
How can I activate an application in AppleScript without switching desktops?
0
Applescript: App always running with input
0
Cocoa application not responding to 'activate' applescript event
26
"is not allowed for assistive access" error when running AppleScript from Java