use DotNetOpenAuth to connect one site to another both ways

I want to use DotNetOpenAuth to make a connection from one site that has DotNetOpenAuth to another site that has DotNetOpenAuth so that they can use each other's api. The goal is to have to make the authorization once then from then on they can do things between each other. They have to be two different site, both C# castle projects. To be honest it'll be about 5 of them that will need to talk between each other and use each other's api, so I just want to store the connections once and not worry about them un-connecting. I have the database set up to store the session and tokens I believe but as it truns out, the docs for DotNetOpenAuth is less then helpful. (At the time of writing the DotNetOpenAuth api doc's site is down) I'm unclear if this web.config set up is all I need to do, which would seem very odd to me, or if there is some example out there that has a more set by step of what I'm asking about.

The question at it's heart is simply, how do you set up one site to authorization another site and store it only once. The thought is that I have no idea how many of these micro sites there will be in the end, just that they have to make a two way authorized connections and then use each other's api.

All I need is a detailed example of a provider set up for a web app and a client for a web app. I'm sure they will not be in the same example but I'm having a hard time finding anything that is a clear step by step on either side. The few convoluted examples have been MVC ones which doesn't help get to the core of it easily.

The end goal is that (Site A) has a connection to (Site B) & (Site C) where (Site C) has a connection to (Site A) & (Site D) meaning that (Site A),(Site B),(Site C),(Site D) are both a provider and a client and that we'd be storing the tokens normally in a session (from clients point of view) in the database. It's not needed to have more then the example of how to clearly make a provider and how to make a client as the rest would be apparent on storing.

UPDATE I have been trying to integrate this example, as it's the best one I can find. The issue is that it's more of a provider as an app verse a site that has the provider in it and the consumer in it. The issue with the example is that it's not really lining up with the files. And it breezes over the ideas on key parts. 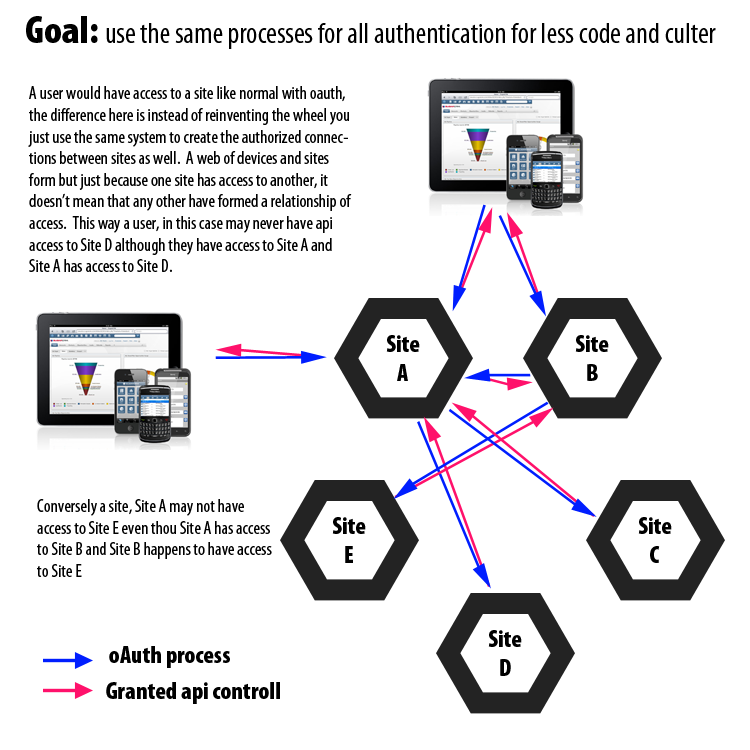 You could use this as a base for your AuthorisationServer implementation and share the library across all the API solutions.

The centralised solution you mention could be a good plan depending on how you want to structure the overall architecture of the various API implementations. Really difficult to suggest anything on that front as it really depends on how you want it to all hang together.

The key field in here is the Scope which defines the level of access any client has. As far as I know you would only need to implement a provider if you actually wanted to start letting other systems make use of your implementation to secure their own services using your system as their identity store which I really don't think you need to do in order to satisfy your requirements for this.

I found getting the a lot of samples to actually work was very time consuming but the code in the samples really is very good and worth studying closely to get a better feel for what is actually going on under the hood.

You don't really need to be a provider to implement this. I'd make a generic implementation of an authorisation server and manually set up authorisations within the database for each site you wish to communicate with on each server.

Use SSL certs for encryption and you should be good to go with OAuth2.0 tokens being sent around for authorising the API calls.

Not the answer you're looking for? Browse other questions tagged c# oauth-2.0 dotnetopenauth or ask your own question.

1816
What is the best way to give a C# auto-property an initial value?
2510
What is the best way to iterate over a dictionary?
246
What is the purpose of the implicit grant authorization type in OAuth 2?
248
Why is there an “Authorization Code” flow in OAuth2 when “Implicit” flow works so well?
0
DotNetOpenAuth and Refresh Tokens
1
dotnetopenauth Samples - Step by step introduction
12
How do I authorize access to ServiceStack resources using OAuth2 access tokens via DotNetOpenAuth?
1331
Why not inherit from List<T>?
6
DotNetOpenAuth vs Owin OAuth