I have a particular need for adjusting the command prompt. At the moment i am using Holmans Dotfiles and I want to further customize it in order to create a prompt that's more readable and clear. What I would like is described below using image, plz note that these are photoshopped in order to look as i want them to ;). This is also an issue on github, with inline images!

Let's say you have this file structure as in this image: 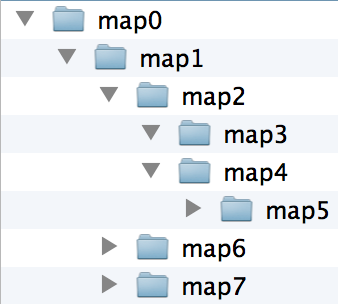 At the moment, when I am in lets say map3 my prompt only shows:

I want to extend this but with alternative styling. At the moment the current map (map3) i am in is highlighted with cyan. I want to be able to see it's parents but those not being highlighted in the same color. Plz look at the image below:

from what i know, is that %3 gives the last 3 dir. However I don't know how to style each dir individually.

The other idea I had, but which is of inferior importance to the problem described above is to have a relative prompt based on if a dir is a git repository yes or no. (so the dirtree is always visible up to the rootmap of the git repo)

that is say that map0 is the root of the git repository and i am in map3, then I would like my prompt to be like this:

optionally it would be nice to be able to style the rootgit map like this for example:

This'll show the path to the git root (git root in magenta, unless you're in the git root, in which case it'll just show the current directory in red): 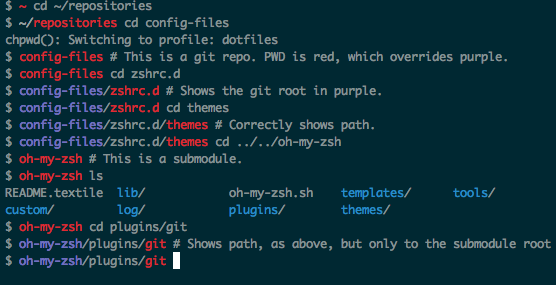 There's a reasonably in-depth look [it's my notes] of how I did all this here. It doesn't yet have the final touch (path between git root and PWD), but everything else is there. It may be useful if you're trying to modify this and want a better understanding.

Not the answer you're looking for? Browse other questions tagged git shell command zsh prompt or ask your own question.

7
how to migrate my bash prompt to zsh

4005
How can I check if a directory exists in a Bash shell script?
5404
How to execute a program or call a system command?
4708
How can I add an empty directory to a Git repository?
2320
How to mkdir only if a directory does not already exist?
1780
How can I count all the lines of code in a directory recursively?
1217
How to revert multiple git commits?
677
Run Command Prompt Commands
1644
How to exclude a directory in find . command
1968
How do I set a variable to the output of a command in Bash?
1095
Git push rejected after feature branch rebase