I am having issues setting up OpenSSH for Windows, using public key authentication.

I have this working on my local desktop and can ssh with a key from Unix machines or other OpenSSH for Windows machines.

I have replicated the build onto a server, I can get password authentication working fine, but when I use the keys I get the following issue:

So for the purposes of testing, I have been just trying to SSH to localhost, but even when tried remotely I get the same issue.

Even more strange, is that when I have both password and public key enabled in sshd_config, it will only attempt to use keys and then bomb out with the above message and won't even try to use password.

Here are the steps I have taken:

It appears the server is killing the connection for some reason.

Tried that with Windows 10 as server and both itself and a Debian Linux as a client.

Only SYSTEM and Administrators group must be have permission in file without inherited. 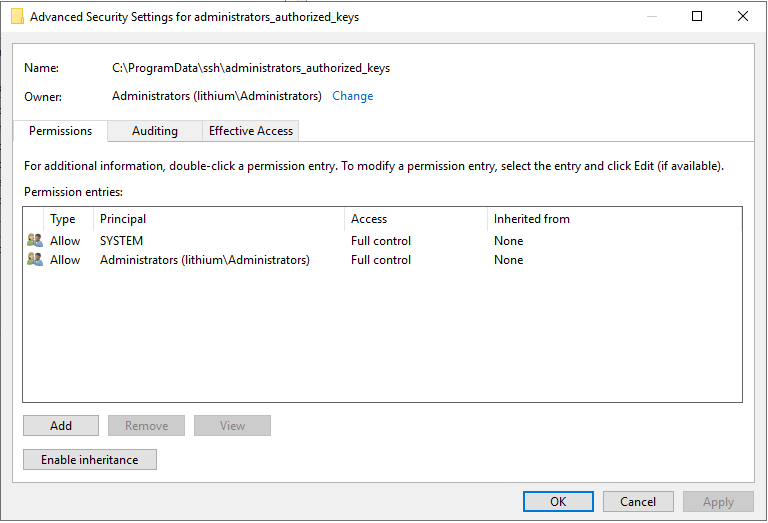 One more tip, if you are stuck, is to run sshd in debug mode. I did this:

It turns out the key need to be in e.g. C:\ProgramData\ssh\administrators_authorized_keys instead of C:\Users\yourUsser.ssh\authorized_keys.

I have solved the issue...

It is related to the account that started the service - it was using the Local System account - this was stopping it accessing the public key and authorized_keys file.

Once I stopped the service and started as the user I was trying to connect into, it worked!

So basically, you need to start with a service account and then external users connect in as that user.

This is just my scripted version of @n0rds great answer.

Place this script in a directory w/ your private/public key/pair and run!

If you are using mls-software.com's version of OpenSSH here is another note.

If you install using the SSHD_SERVER account and privilege separation you will be able to use public key authentication (per http://www.mls-software.com/opensshd-pki.html). However if UAC is enable you will not be successful with the install. The user(s) will not be created properly and the service will not be created. Manually trying to get these items up after the fact is very difficult. Simply disabling UAC before installation will allow the installation process to properly create the user(s) and the service. After installation you can re-enable UAC.

When I created the SSHD_SERVER account manually authentication succeed when using password authentication but the client termination the connection with "/bin/bash: Operation not permitted". Authentication with public keys was closed by the server (original error posted by Cambolie).

I solved it by:

n0rd's solution is on the money but there's an added complication for users that are also in the administrator's group. If you're looking for a solution to a situation involving the following conditions:

The issue I ran across is that when I tried n0rd's solution it didn't work for users under the conditions above. After some tinkering, I found a solution that works consistently for me. Follow n0rd's solution and just change the following

In the ssh_config make sure the following settings are set:

Also, make sure to comment out the Match Group Administrators setting:

Make sure to include the client's public key in the servers C:\Users\username\.ssh\authorized_keys file.

Finally, to help match the user to the account I found it helpful to be more specific with the user data on the client. Instead of using the plain username, I used the username along with the domain of the user on the server. In my case, my client's C:\Users\UserName\.ssh\config file looked like this:

In this case, my Windows 10 server would be called serversname (under device name). By specifying the user in this way I could avoid password authentication.

As an added bonus, this worked very well with a default shell of PowerShell 7. Even my default PowerShell profile worked over ssh and I got full support for posh-git and oh-my-posh. However, I found that the default method suggested for making PowerShell the default shell environment, (by editing the ssh_conf to include 'Subsystem powershell c:/progra~1/powershell/7/pwsh.exe -sshs -NoLogo') did not work for me. Instead, on the server use the command in an elevated PowerShell window:

This just creates a registry entry. You can always pop in the registry to remove it later if you want.

I've thoroughly tested n0rd's solution on multiple Windows Pro 1809 and 2004 computers. I concur with most of his steps.

Server setup continued (non-elevated PowerShell): Step 4: Do NOT perform anything in step 4.

I did not find any issues, with any file, regarding security, permissions or Unicode. They were all correct out of the box.

I ran into a different situation.

First, debug as gWay said, with another terminal windows connecting to the server.

recode the authorized_keys into utf-8

This is a very English language centric default Microsoft use. The group match lines currently check for the ENGLISH language version string of the Administrators group called 'administrators' this FAILS on many other language installs of windows. On a German installation that line needs to be 'administratoren' instead. They better make it possible le to match group by SID instead. ( This is even more important in the DenyGroups matching feature - have not tested this yet - but if they check for strings instead of SID there then the denies are meaningless and easily circumvented by using a different windows language install )

Not the answer you're looking for? Browse other questions tagged windows ssh public-key-encryption openssh public-key or ask your own question.

7
VSCode: how to ssh remote connect to remote WSL2
1
How to configure Ansible with Cygwin on windows hosts
1
Access a git repo on local network drive through proxy
1
git+vscode connect to windows with openssh (remote development)
1
Public key authentication doesn't work when OpenSSH Server in Windows 10 is started as a service

1239
How can I develop for iPhone using a Windows development machine?
1350
How do I remove the passphrase for the SSH key without having to create a new key?
10
Connecting to gitosis server through an SSH tunnel
837
How do I access my SSH public key?
513
Adding a public key to ~/.ssh/authorized_keys does not log me in automatically
218
Git on Bitbucket: Always asked for password, even after uploading my public SSH key
1
Can not connect with ssh to an ubuntu image in Azure
0
Setup OpenSSH server on Windows 7 for keybased authentication
2
How can I ssh into a server that requires two password authentication using Python's Paramiko module?