I pulled the code from http://www.bonto.ch/blog/2011/12/08/json-libraries-for-ios-comparison-updated/ and tested it on my local machine.

I was surprised by the results and NSJSonSerialization gave much better performance than JSONKit.

Has NSJSonSerialization really overtaken JSONKit in terms of speed or did I do something wrong? 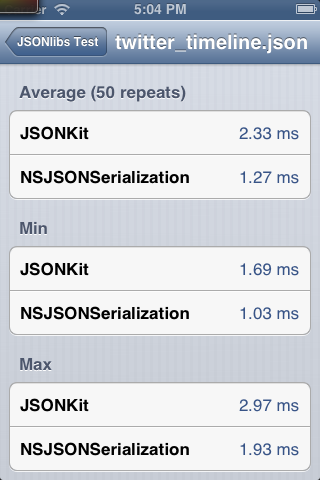 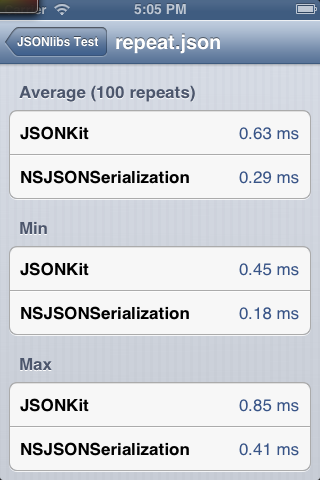 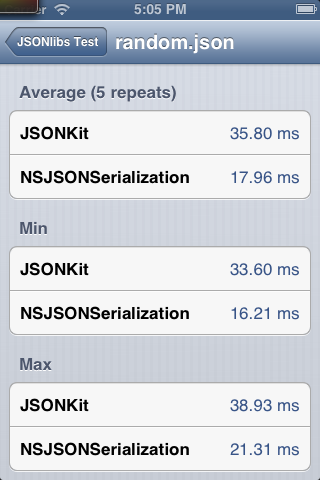 You have not done anything wrong.

Things have changed in iOS 6. Apple have greatly improved the performance of NSJSONSerialization. When using iOS 6 and up, it is the fastest.

JSONKit has also not been updated in a year. It is falling behind.

Interestingly, there are still people out there who care about JSON parser performance ;)

About three years ago, I developed my own JSON parser with the goal to make it fast and with a low memory foot-print. Since then, I was interested how it compares to others, especially NSJSONSerialization and JSONKit. I do have a number of bench marks which I run occasionally, to check how new compilers and OSs did improve the parsers. I also forked Bonto's bench, fixed a few errors, added a few pathological JSON files and added my own parser as well.

Well, I can confirm that during the last years, the performance of NSJSONSerialization has been improved greatly. It's now comparable to JSONKit for many work loads. If I remember right, a certain test took 690ms for NSJSONSerialization iOS 5.0, while it now performs at 520ms on iOS 6.1. JSONKit took about 524ms - and now with the same sources - it takes about 500ms, the latter solely due to better compilers.

Since I was curious, I gathered some results, compiled with Xcode (soon available) and a few screenshots taken from my forked Bonto's bench mark.

The test includes my own parser library (JPJson) in the test with name "JPJsonData" (the newest version which is not yet checked in into GitHub), in a fair and comparable test. I ensured, JSONKit has been compiled with all optimizations enabled, and disabled assertions, so that it is as fast as possible.

The test has been run on this hardware, an iPad 2 (the second variant), with these specs: 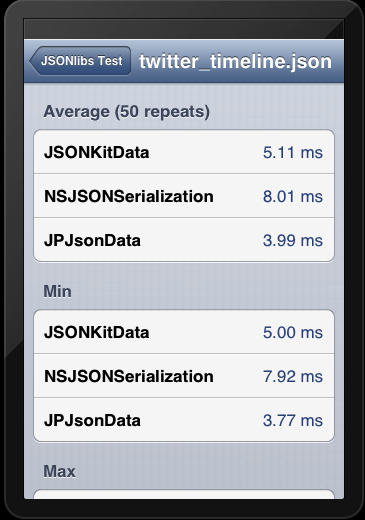 Some other test file, pretty much average JSON: 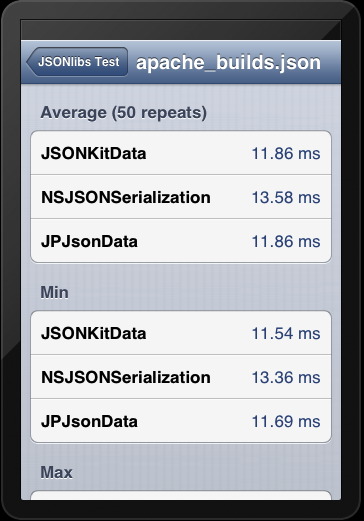 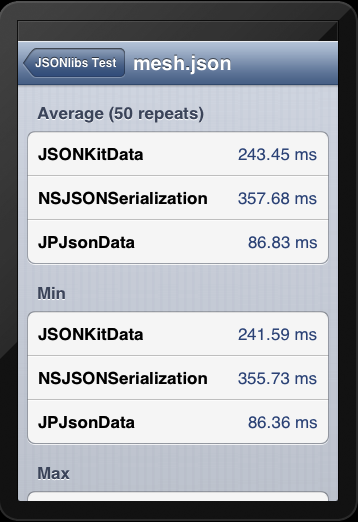 JSONKit failed to compile for 64-bit.

All timings in milli seconds.

I run the tests on a iPhone 4 (ios7) and iPhone 4S (ios 6.1) and NSJSONSerialization is faster in both cases. 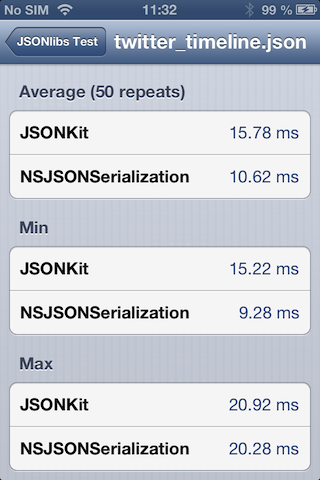 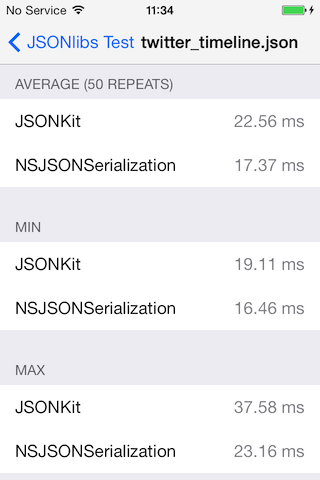 Not the answer you're looking for? Browse other questions tagged ios jsonkit or ask your own question.