I am working on dorsal hand vein recognition system. I have already binarised and pre-processed the image followed by feature extraction (white pixels coordinates) of the thinned vein patterns as shown below in the figure (Image 1). These steps were repeated for 10 images and having their coordinates stored in .txt file. 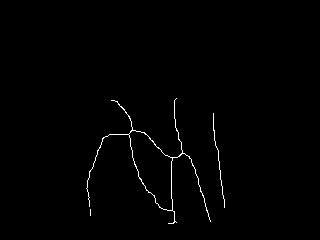 Now, let's say I have a query image (Image 2) as below where all the mentioned above steps have been applied and coordinates were retrieved. 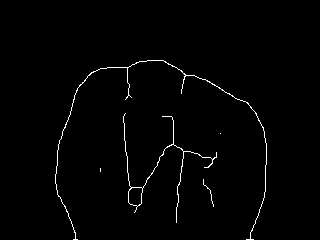 For the matching purpose, I want to adapt this paper matching strategy which stated that "An algorithm that, somehow, does the exact same thing is implemented in order to do a similarity matching between binary images. The matching is a two way process. In the first step, the algorithm scans through the query image and takes every foreground pixel (background pixels can also be taken) value and compares this with the pixel value in the database image at the corresponding location. If it finds the same value at the same position in the database image, this will be taken as a hit count. Otherwise, it will be taken as a miss count and finally the difference of the hit and the miss count is divided by the total number of foreground pixels in the query image. The result of this division gives a number that indicates how Similar the Query image is to the Database image (SQD). In the second step, the database image is scanned and its foreground pixel elements are compared against the query image as is done in the first step. This will give us a result that indicates how Similar the Database image is to the Query image (SDQ). Then the average of the SQD and the SDQ, Average Similarity Measure (ASM), is taken as a ranking measure for the retrieval process."

That is a very challenging problem. When you skeletonize the image you are potentially throwing away information that might be helpful. If you have to work with the skeletonized images, I would extract features of interest and then try to match on them. For example, you could identify all intersections of the veins to get a set of points. You could then do a best fit between the points in two different images to provide a metric of how similar they are.

Pixel-by-pixel is easy, you just hash the image and store the has, then hash the new image and compare the hashes. But that is going to fail if images are scaled, or in case of lossy compressions, re-saved.

That's going to essentially match if somebody uploads the same file twice. This may or may not be what you are after.

If not, you need some sort of image similarity algorithm. There is a question about that already, here. Image comparison - fast algorithm

Not the answer you're looking for? Browse other questions tagged matlab image-processing or ask your own question.

1
Image local thresholding
1770
Image Processing: Algorithm Improvement for 'Coca-Cola Can' Recognition
5
How to understand the average pixel number described in the frequency image?
0
Need help regarding plotting the pixel from binary images to a sparse image
0
Sample covariance matrix for each pixel (taking the neighboring pixel) and applying for entire image dimension
1
How to perform image registration with an alpha channel