CFPDFForm Populate Error - java.lang.NullPointerException: Platform, Locale, and Platform Name must not be null

I've been banging my head against the wall trying to figure out the cause of the error below. 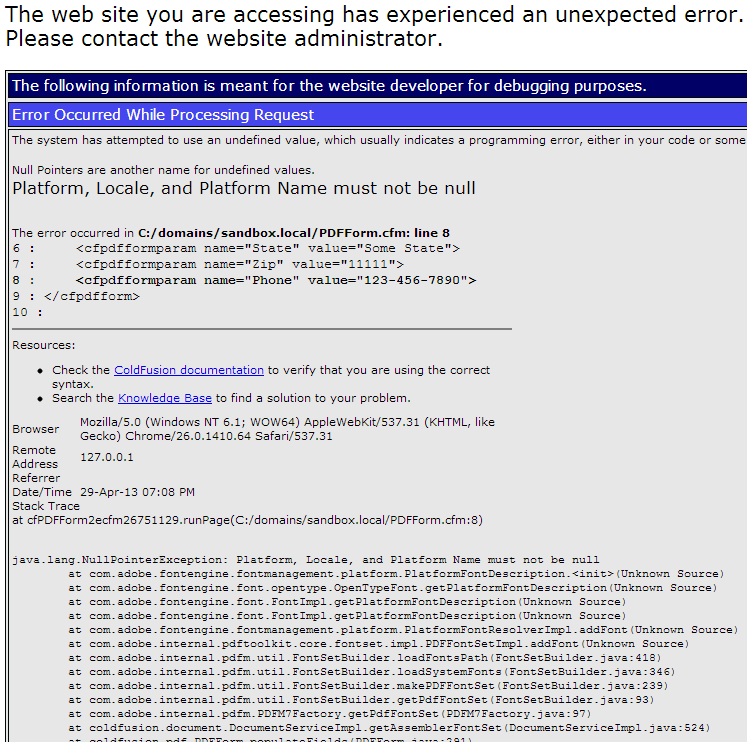 All I'm doing is running this very simple CFPDFFORM to populate a PDF form.

I've done a lot of searches and found very few people talking about this error. The one page that I found was ColdFusion CFPDFFORM does not populate PDF form fields. I tried the idea of going through my fonts and looking for corrupted ones. I even used a program called Fix Fonts Folder (http://fix-fonts-folder.en.softonic.com/) which was able to locate some corrupt fonts. But even then, I still get the error. So, I'm desperately looking for an answer.

pdf coldfusion cfpdfform
Share
Improve this question
edited May 23, 2017 at 12:06

I wrote a script that will parse all the font files in c:\windows\fonts and report back on the bad ones:

I had the same issue too right after the installation of CS6.0.

Through trial and error, as stated above and a good few restarts of coldfusion I've whittled it down to the following font files that you can uninstall via font manager by going to C:\Windows\Fonts :-

Hope this helps someone. Took me a fair few hours to fix this "niggle".

The workaround on the reported bug solved the issue. Thanks Miguel-F

The workaround is: "delete all fonts installed with the same date as your creative cloud 6 app installations or uninstall creative could 6"

had the same issue myself.

My solution (which compliments the above correct answer): Here's the list of fonts that Adobe installs with the Creative Suite 6: http://www.adobe.com/type/browser/fontinstall/cs6installedfonts.html

In my case it turned out none of those fonts were corrupt per se, though probably weren't installed the way Windows like it. Re-installing it manually somewhat fixed the issue.

One more note: I've removed all until MyriadPro (including it) constantly refreshing the page containing CFPDFFORM bit until it worked. So for those trying to get a fast fix, I'd recommend starting with MyriadPro family. It just may turn out it's the one that breaks the things.

Hope this helps someone out!

It turns out I am not able to comment until certain number of points will be acquired, therefore I'm not able to say how much Jesse Carlton's answer (above) helped me out.

Here's one more step that solved me the bug:

*the software from the step 3 was downloaded as evaluation version and did the trick for me.

Not the answer you're looking for? Browse other questions tagged pdf coldfusion cfpdfform or ask your own question.

0
Dynamic Drop Down List in ColdFusion 9
2
iText PDF setting font property on form acroFields
0
PHP: Filling out form in PDF using FPDM: unnamed text annotations
1
Why might some methods be missing in JSoup?