How do I use Notepad++ (or other) with msysgit?

How do I use Notepad++ (or any other editor besides vim) with msysgit?

I tried all of the following to no avail:

Or, the following can be issued on the command line on either 32-bit or 64-bit Windows. It will pull the location of notepad++.exe from the registry and configure git to use it automatically:

zumalifeguard's solution (upvoted) is simpler than the original one, as it no longer needs a shell wrapper script.

As I explain in "How can I set up an editor to work with Git on Windows?", I prefer a wrapper, as it is easier to try and switch editors, or change the path of one editor, without having to register said change with a git config again.
But that is just me.

Additional information: the following solution works with Cygwin, while the zuamlifeguard's solution does not.

does work. Those commands are interpreted as shell script, hence the idea to wrap any windows set of commands in a sh script.
(As Franky comments: "Remember to save your .sh file with Unix style line endings or receive mysterious error messages!")

More details on the SO question How can I set up an editor to work with Git on Windows?

Note the '-multiInst' option, for ensuring a new instance of notepad++ for each call from Git.

Note also that, if you are using Git on Cygwin (and want to use Notepad++ from Cygwin), then scphantm explains in "using Notepad++ for Git inside Cygwin" that you must be aware that:

So the script in that case would be:

Val commented (and then deleted) that you should not use -notabbar option:

It makes no good to disable the tab during rebase, but makes a lot of harm to general Notepad usability since -notab becomes the default setting and you must Settings>Preferences>General>TabBar> Hide>uncheck every time you start notepad after rebase. This is hell. You recommended the hell.

During the installation you'll see the following screen: 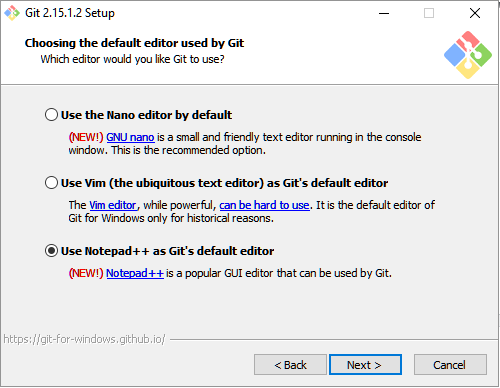 I use the approach with PATH variable. Path to Notepad++ is added to system's PATH variable and then core.editor is set like following:

Also, you may add some additional parameters for Notepad++:

(as I detailed in "Git core.editor for Windows")

And here you can find some options you may use when stating Notepad++ Command Line Options.

If you unpack/install Notepad++ into c:\utils\npp\ and rename notepad++.exe to npp.exe for simplicity, then all you have to do is

No wrapper scripts or other trickery. No need to have Notepad++ in PATH.

I am using Windows 10 and notepad++, and I was getting this error message:

So I make the setup in this way:

Then while committing you should see your favorite text editor popping up.

I used starikovs' solution. I started with a bash window and gave the commands

Then I found the .bashrc file in windows explorer, opened it with notepad++ and added

so that bash knows where to find Notepad++. (Having Notepad++ in the bash PATH is a useful thing on its own!) Then I pasted his line

into a bash window. I started a new bash window for a git repository to test things with the command

and the file opened in Notepad++ as hoped.

Here is a solution with Cygwin:

Then I set these variables:

ZomboZombo
1
Add a comment  |
Highly active question. Earn 10 reputation (not counting the association bonus) in order to answer this question. The reputation requirement helps protect this question from spam and non-answer activity.

Not the answer you're looking for? Browse other questions tagged git configuration text-editor notepad++ msysgit or ask your own question.

0
git commit -- aborting commit prematurely when using notepad++ as default editor
619
How can I set up an editor to work with Git on Windows?
152
Problems with entering Git commit message with Vim
86
How do I specify C:\Program Files without a space in it for programs that can't handle spaces in file paths?
9
using Notepad++ for git inside cygwin
9
Git problem with interactive rebase
6
Github - Notepad++
10
How to set up a rebase in Git Bash on Windows
8
GIT .mailmap works per repo, but not in global, why?
5
git pull shows "destructing" messages
See more linked questions