I have already looked through related questions but nothing has solved my problem.

At present, when I try this, the partial curl un-animates, but the MFMailComposeViewController doesn't get presented. I also have a warning of:

Warning: Attempt to present MFMailComposeViewController: on InfoController: whose view is not in the window hierarchy!

It's a communications issue between view-controllers resulting out of an unclear parent-child view-controller relationship... Without using a protocol and delegation, this won't work properly.

The rule of thumb is:

(Sounds heartless, but it makes sense, if you think about it).

You know that something is wrong if you have to add @Class declarations in your headers to fix chained #import compiler warnings. Cross-references are always a bad thing (btw, that's also the reason why delegates should always be (assign) and never (strong), as this would result in a cross-reference-loop and a group of Zombies)

So, let's look at these relationships for your project:

As you didn't say, I assume the calling controller is named MainController. So we'll have:

So you want to have this:

The child controller defines a protocol and has a delegate of unspecified type which complies to its protocol (in other words: the delegate can be any object, but it must have this one method)

...and the MainController adopts both the InfoControllerDelegate and the MFMailComposeDelegate protocol, so it can dismiss the MFMailComposer again (Note, that doesn't and probably shouldn't need to be strong properties, just showing this here to make it clear)

3. MainController presents its InfoViewController and sets itself as the delegate

The 'infoController.delegate = self' is the crucial step. This gives the infoController a possibility to send a message back to the MainController without knowing it ObjectType (Class). No #import required. All it knows, it that it's an object that has the method -returnAndSendMail; and that's all we need to know.

Typically you would create your viewController with alloc/init and let it load its xib lazily. Or, if you're working with Storyboards and Segues, you probably want to intercept the segue (in MainController) in order to set the delegate programmatically:

4. In InfoController, the eMail button is pressed:

...and here (in MainController!), you'll dismiss the InfoController (clean up because it's the responsibility of the MainController) and present the MFMailController:

so, what you're doing with the MFMailController is practically the same as with the InfoController. Both have their unknown delegate, so they can message back and if they do, you can dismiss them and proceed with whatever you should to do.

By dismissing then running presenting code from the being-dismissed view controller, you are breaking this relationship.

Instead, you should be doing the presenting of your mailController from the viewController that presented InfoController, after the infoController has been dismissed.

The trad way to do this is via a delegate callback to the underlying viewController which then handles the two steps of dismissing and presenting. But now we use blocks..

Move your sendMeMail method into the VC that presented infoController

Then - in infoController - you can call it in the completion block…

(you need to get a local pointer to self.presentingViewController because you cannot refer to that property after the controller has been dismissed)

Alternatively keep all of the code in infoController by putting the sendMeMail code in the completion block:

update/edit
If you put all of the code in the completion block, you should set mailController's mailComposeDelegate to presentingVC, not self. Then handle the delegate method in the presenting viewController.

update 2
@Auro has provided a detailed solution using a delegate method, and in his comments points out that this best expresses the separation of roles. The traditionalist in me agrees, and I do regard dismissViewController:animated:completion as a kludgy and easily misunderstood piece of API.

Apple's docs have this to say:

Notice that they don't even mention dismissViewController:animated:completion: here, as if they don't have much respect for their own API.

But delegation seems to be an issue that people often struggle with: and can require a lengthy answer... I think this is one of the reasons Apple pushes blocks so hard. In cases where code only needs to execute in one place, the delegate pattern is often regarded by the uninitiated as an overly complex solution to an apparently simple problem.

I suppose the best answer, if you are learning this stuff, is to implement it both ways. Then you will really get a grip on the design patterns in play.

After dismissing self viewController, you cannot present view controllers from self.

Then what you can do ?

If you're using storyboards, try checking the transition types you're using on your segues. You will have issues dismissing layers of viewcontrollers you transition to modally. This may be the source of your problems. Try switching them to push instead. 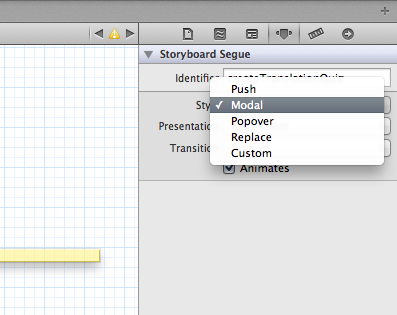 Although you can write delegates to accomplish dismissing viewcontrollers it really shouldn't be needed. This is an overly complicated solution. Image if you have a viewcontroller that transitions to dozens of different storyboards, are you going to have dozens of delegates controlling dismissal? It seems suboptimal.

Not the answer you're looking for? Browse other questions tagged iphone ios objective-c or ask your own question.