Regex for string not ending with given suffix

I know the regex should be ending with $ to mark the end, though I don't know what should preceed it.

Edit: The original question doesn't seem to be a legit example for my case. So: how to handle more than one character? Say anything not ending with ab?

I've been able to fix this, using this thread:

Though the downside with this is, it doesn't match a string of one character.

You don't give us the language, but if your regex flavour support look behind assertion, this is what you need:

(?<!a) is a negated lookbehind assertion that ensures, that before the end of the string (or row with m modifier), there is not the character "a".

See it here on Regexr

You can also easily extend this with other characters, since this checking for the string and isn't a character class.

This would match anything that does not end with "ab", see it on Regexr

If you put the ^ symbol at the beginning of brackets, it means "everything except the things in the brackets." $ is simply an anchor to the end.

For multiple characters, just put them all in their own character set:

To search for files not ending with ".tmp" we use the following regex: 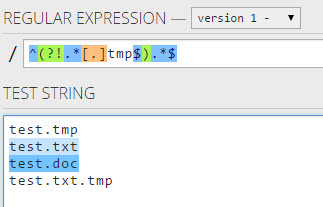 the regex above will match strings which is not ending with a.

The accepted answer is fine if you can use lookarounds. However, there is also another approach to solve this problem.

If we look at the widely proposed regex for this question:

We will find that it almost works. It does not accept an empty string, which might be a little inconvinient. However, this is a minor issue when dealing with just a one character. However, if we want to exclude whole string, e.g. "abc", then:

won't do. It won't accept ac, for example.

There is an easy solution for this problem though. We can simply say:

This comes from a simple observation that a string that is shorter than the text we won't forbid can not contain this text by definition. So we can either accept anything that is shorter("ab" isn't "abc"), or anything long enough for us to accept but without the ending.

Here's an example of find that will delete all files that are not .jpg:

The question is old but I could not find a better solution I post mine here. Find all USB drives but not listing the partitions, thus removing the "part[0-9]" from the results. I ended up doing two grep, the last negates the result:

This results on my system:

If I only want the partitions I could do:

And when I do:

Anything that matches something ending with a --- .*a$ So when you match the regex, negate the condition or alternatively you can also do .*[^a]$ where [^a] means anything which is not a

If you are using grep or sed the syntax will be a little different. Notice that the sequential [^a][^b] method does not work here:

FWIW, I'm finding the same results in Regex101, which I think is JavaScript syntax.

2
Regex to match URLs that does not end with a particular word or word set
0
How to create a regex expression for Safari
0
Powershell with regular expression and delete operation
0
How to specify line ends and reverse logic in regex?
0
Regex check a string without a tailing word with a consecutive number
467
Regex lookahead, lookbehind and atomic groups
0
unix find regex with patterns and not ending with another pattern
1
In Python, how to write a regular expression matching strings starting with string A but NOT ending with B
2
Java: Match Regex unless ending with arbitrary suffix
0
Define regular expression that matches urls that end with digits unless anything else comes after
See more linked questions

402
Converting user input string to regular expression
234
regex to match a single character that is anything but a space
343
Remove new lines from string and replace with one empty space
299
How to match, but not capture, part of a regex?
410
Greedy vs. Reluctant vs. Possessive Qualifiers
1078
Check whether a string matches a regex in JS
807
How can I match "anything up until this sequence of characters" in a regular expression?
283
Grep regex NOT containing a string
0
Regex for a string with alpha numeric containing a '.' character