How to iterate over rows in a DataFrame in Pandas?

I have a DataFrame from pandas:

Now I want to iterate over the rows of this frame. For every row I want to be able to access its elements (values in cells) by the name of the columns. For example:

Is it possible to do that in pandas?

I found this similar question. But it does not give me the answer I need. For example, it is suggested there to use:

But I do not understand what the row object is and how I can work with it.

DataFrame.iterrows is a generator which yield both index and row

How to iterate over rows in a DataFrame in Pandas?

Iteration in pandas is an anti-pattern, and is something you should only do when you have exhausted every other option. You should not use any function with "iter" in its name for more than a few thousand rows or you will have to get used to a lot of waiting.

Do you want to print a DataFrame? Use DataFrame.to_string().

Do you want to compute something? In that case, search for methods in this order (list modified from here):

iterrows and itertuples (both receiving many votes in answers to this question) should be used in very rare circumstances, such as generating row objects/nametuples for sequential processing, which is really the only thing these functions are useful for.

Appeal to Authority
The docs page on iteration has a huge red warning box that says:

Iterating through pandas objects is generally slow. In many cases, iterating manually over the rows is not needed [...].

* It's actually a little more complicated than "don't". df.iterrows() is the correct answer to this question, but "vectorize your ops" is the better one. I will concede that there are circumstances where iteration cannot be avoided (for example, some operations where the result depends on the value computed for the previous row). However, it takes some familiarity with the library to know when. If you're not sure whether you need an iterative solution, you probably don't. PS: To know more about my rationale for writing this answer, skip to the very bottom.

A good number of basic operations and computations are "vectorised" by pandas (either through NumPy, or through Cythonized functions). This includes arithmetic, comparisons, (most) reductions, reshaping (such as pivoting), joins, and groupby operations. Look through the documentation on Essential Basic Functionality to find a suitable vectorised method for your problem.

If none exists, feel free to write your own using custom cython extensions.

List comprehensions should be your next port of call if 1) there is no vectorized solution available, 2) performance is important, but not important enough to go through the hassle of cythonizing your code, and 3) you're trying to perform elementwise transformation on your code. There is a good amount of evidence to suggest that list comprehensions are sufficiently fast (and even sometimes faster) for many common pandas tasks.

The formula is simple,

If you can encapsulate your business logic into a function, you can use a list comprehension that calls it. You can make arbitrarily complex things work through the simplicity and speed of raw python.

Let's demonstrate the difference with a simple example of adding two pandas columns A + B. This is a vectorizable operaton, so it will be easy to contrast the performance of the methods discussed above. 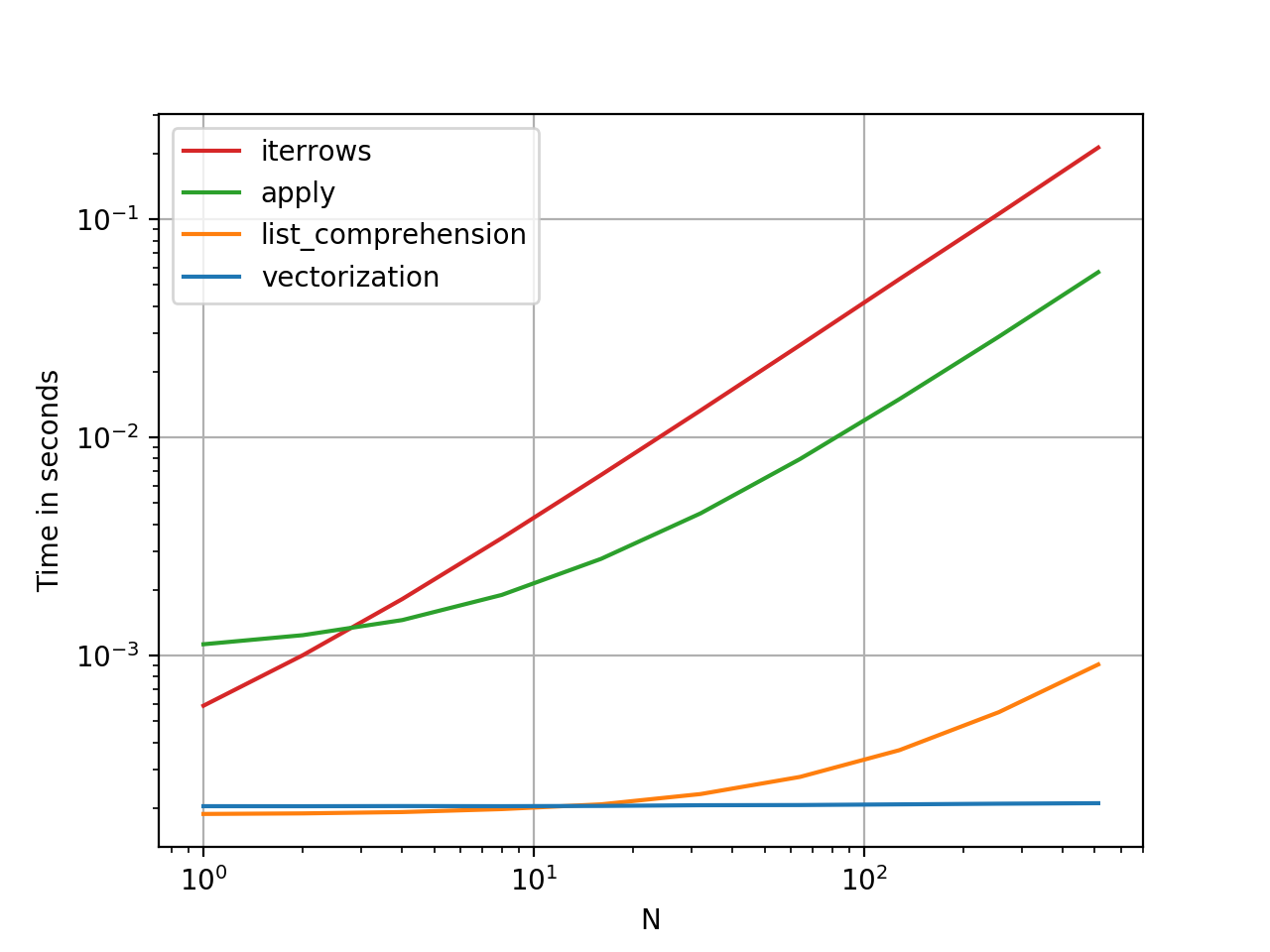 Benchmarking code, for your reference.

I should mention, however, that it isn't always this cut and dry. Sometimes the answer to "what is the best method for an operation" is "it depends on your data". My advice is to test out different approaches on your data before settling on one.

* Pandas string methods are "vectorized" in the sense that they are specified on the series but operate on each element. The underlying mechanisms are still iterative, because string operations are inherently hard to vectorize.

Why I Wrote this Answer

A common trend I notice from new users is to ask questions of the form "how can I iterate over my df to do X?". Showing code that calls iterrows() while doing something inside a for loop. Here is why. A new user to the library who has not been introduced to the concept of vectorization will likely envision the code that solves their problem as iterating over their data to do something. Not knowing how to iterate over a DataFrame, the first thing they do is Google it and end up here, at this question. They then see the accepted answer telling them how to, and they close their eyes and run this code without ever first questioning if iteration is not the right thing to do.

The aim of this answer is to help new users understand that iteration is not necessarily the solution to every problem, and that better, faster and more idiomatic solutions could exist, and that it is worth investing time in exploring them. I'm not trying to start a war of iteration vs vectorization, but I want new users to be informed when developing solutions to their problems with this library.

First consider if you really need to iterate over rows in a DataFrame. See this answer for alternatives.

If you still need to iterate over rows, you can use methods below. Note some important caveats which are not mentioned in any of the other answers.

You should use df.iterrows(). Though iterating row-by-row is not especially efficient since Series objects have to be created.

While iterrows() is a good option, sometimes itertuples() can be much faster:

You can also use df.apply() to iterate over rows and access multiple columns for a function.

You can use the df.iloc function as follows:

I was looking for How to iterate on rows AND columns and ended here so :

You can write your own iterator that implements namedtuple

This is directly comparable to pd.DataFrame.itertuples. I'm aiming at performing the same task with more efficiency.

For the given dataframe with my function:

A comprehensive test
We test making all columns available and subsetting the columns. 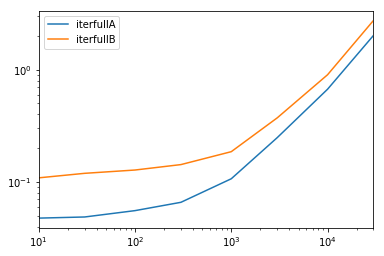 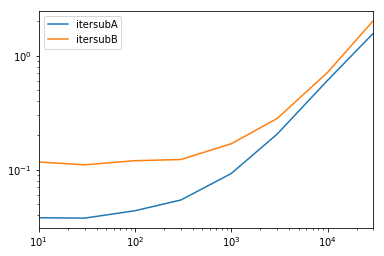 How to iterate efficiently?

If you really have to iterate a pandas dataframe, you will probably want to avoid using iterrows(). There are different methods and the usual iterrows() is far from being the best. itertuples() can be 100 times faster.

Different methods to iterate over rows in a pandas dataframe:

Generate a random dataframe with a million rows and 4 columns:

1) The usual iterrows() is convenient but damn slow:

2) The default itertuples() is already much faster but it doesn't work with column names such as My Col-Name is very Strange (you should avoid this method if your columns are repeated or if a column name cannot be simply converted to a python variable name).:

3) The default itertuples() using name=None is even faster but not really convenient as you have to define a variable per column.

4) Finally, the named itertuples() is slower than the previous point but you do not have to define a variable per column and it works with column names such as My Col-Name is very Strange.

This article is a very interesting comparison between iterrows and itertuples

To loop all rows in a dataframe you can use:

Sometimes a useful pattern is:

To loop all rows in a dataframe and use values of each row conveniently, namedtuples can be converted to ndarrays. For example:

Iterating over the rows:

Please note that if index=True, the index is added as the first element of the tuple, which may be undesirable for some applications.

There is a way to iterate throw rows while getting a DataFrame in return, and not a Series. I don't see anyone mentioning that you can pass index as a list for the row to be returned as a DataFrame:

Note the usage of double brackets. This returns a DataFrame with a single row.

For both viewing and modifying values, I would use iterrows(). In a for loop and by using tuple unpacking (see the example: i, row), I use the row for only viewing the value and use i with the loc method when I want to modify values. As stated in previous answers, here you should not modify something you are iterating over.

Here the row in the loop is a copy of that row, and not a view of it. Therefore, you should NOT write something like row['A'] = 'New_Value', it will not modify the DataFrame. However, you can use i and loc and specify the DataFrame to do the work.

I know I'm late to the answering party, but I just wanted to add to @cs95's answer above, which I believe should be the accepted answer. In his answer, he shows that pandas vectorization far outperforms other pandas methods for computing stuff with dataframes.

If you add the following functions to @cs95's benchmark code, this becomes pretty evident: 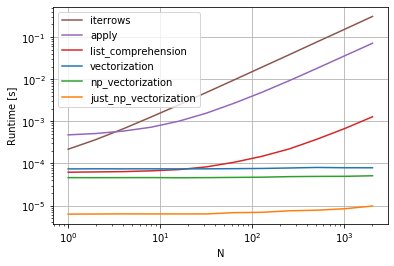 You can also do numpy indexing for even greater speed ups. It's not really iterating but works much better than iteration for certain applications.

You may also want to cast it to an array. These indexes/selections are supposed to act like Numpy arrays already but I ran into issues and needed to cast

There are so many ways to iterate over the rows in pandas dataframe. One very simple and intuitive way is :

This example uses iloc to isolate each digit in the data frame.

Some libraries (e.g. a Java interop library that I use) require values to be passed in a row at a time, for example, if streaming data. To replicate the streaming nature, I 'stream' my dataframe values one by one, I wrote the below, which comes in handy from time to time.

Which can be used:

And preserves the values/ name mapping for the rows being iterated. Obviously, is a lot slower than using apply and Cython as indicated above, but is necessary in some circumstances.

Not the answer you're looking for? Browse other questions tagged python pandas rows dataframe or ask your own question.

327
What is the most efficient way to loop through dataframes with pandas?
135
iterating row by row through a pandas dataframe
-1
Pandas Dataframe in Flask
1
Iterate through Dataframe Rows in Loop
1
iterate for loop over dataframe rows
1
How to iterate over rows in Pandas Dataframe
0
Iteration over a Pandas DataFrame
0
Print rows from a Pandas DF
0
if statement produces ValueError: The truth value of a Series is ambiguous
0
Iterate pandas data frames by name of columns with pd.isnull
See more linked questions