We need to integrate Karma test runner into TeamCity and for that I'd like to give sys-engineers small script (powershell or whatever) that would:

So my real question is: "how can one check in a script, if desired version of package installed?". Should you do the check, or it's safe to just call npm -g install everytime?

I don't want to always check and install the latest available version, because other config values may become incompatible

To check if any module in a project is 'old':

'outdated' will check every module defined in package.json and see if there is a newer version in the NPM registry.

For example, say xml2js 0.2.6 (located in node_modules in the current project) is outdated because a newer version exists (0.2.7). You would see:

To update all dependencies, if you are confident this is desirable:

Or, to update a single dependency such as xml2js:

The best workflow is to:

Check out npm-check-updates to help with this workflow.

There is also a "fresh" module called npm-check: 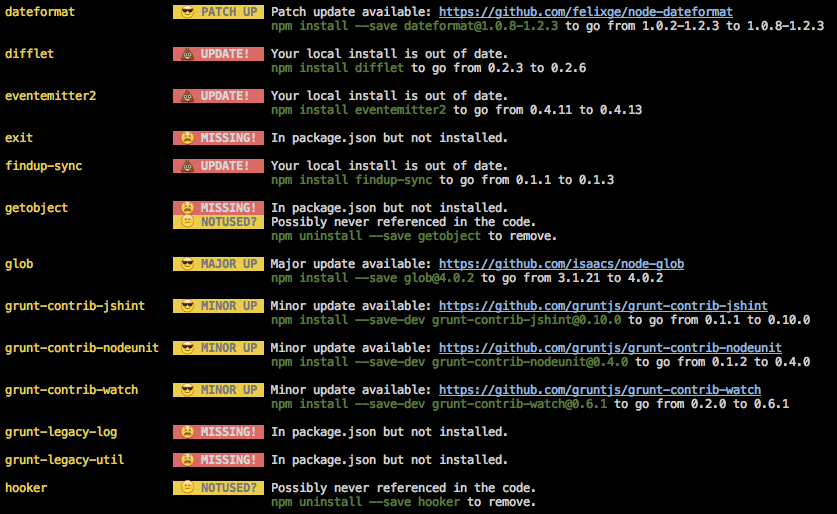 It also provides a convenient interactive way to update the dependencies with npm-check -u.

That is all. All of the package versions in package.json will be the latest major versions.

What is happening here?

This way it is not necessary to update your local package.json file.

Note that this will update your package to the latest version.

And with npm list (package_name) you can find out the current version of your local packages.

Check and pick packages to update

No additional packages, to just check outdated and update those which are, this command will do:

This will automatically update the package.json file. We don't have to update the latest version manually and then use npm update <package name>

You can still get the old behavior using

When installing npm packages (both globally or locally) you can define a specific version by using the @version syntax to define a version to be installed.

In other words, doing: npm install -g karma@0.9.2 will ensure that only 0.9.2 is installed and won't reinstall if it already exists.

As a word of a advice, I would suggest avoiding global npm installs wherever you can. Many people don't realize that if a dependency defines a bin file, it gets installed to ./node_modules/.bin/. Often, its very easy to use that local version of an installed module that is defined in your package.json. In fact, npm scripts will add the ./node_modules/.bin onto your path.

This gives you the benefit of your package.json defining the version of karma to use and not having to keep that config globally on your CI box.

To really update just one package install NCU and then run it just for that package. This will bump to the real latest.

Not the answer you're looking for? Browse other questions tagged node.js teamcity npm karma-runner or ask your own question.

2151
How to update each dependency in package.json to the latest version?
27
NPM install fails with node-gyp
13
Update package to a major release with NPM
4
Command “npm update” vs package “npm-check-updates”
3
Npm audit shows 9 vulnerabilities upon creating a new react native project
1
Is this correct, ng update --all only shows the upgrade options available?
0
Updated related objects in Loopback behaving inconsisently
0
Not able to click webelement with Protractor

1109
Where does npm install packages?
1767
How can I update NodeJS and NPM to the next versions?
2421
Find the version of an installed npm package
1233
How can I uninstall npm modules in Node.js?
1002
How to install a previous exact version of a NPM package?
2151
How to update each dependency in package.json to the latest version?
1809
What is the difference between Bower and npm?
2240
What's the difference between dependencies, devDependencies and peerDependencies in npm package.json file?
2361
What is the --save option for npm install?
1705
Do I commit the package-lock.json file created by npm 5?