Differences between fork and exec

What are the differences between fork and exec?

The use of fork and exec exemplifies the spirit of UNIX in that it provides a very simple way to start new processes.

The fork call basically makes a duplicate of the current process, identical in almost every way. Not everything is copied over (for example, resource limits in some implementations) but the idea is to create as close a copy as possible.

The new process (child) gets a different process ID (PID) and has the PID of the old process (parent) as its parent PID (PPID). Because the two processes are now running exactly the same code, they can tell which is which by the return code of fork - the child gets 0, the parent gets the PID of the child. This is all, of course, assuming the fork call works - if not, no child is created and the parent gets an error code.

So, fork and exec are often used in sequence to get a new program running as a child of a current process. Shells typically do this whenever you try to run a program like find - the shell forks, then the child loads the find program into memory, setting up all command line arguments, standard I/O and so forth.

But they're not required to be used together. It's perfectly acceptable for a program to fork itself without execing if, for example, the program contains both parent and child code (you need to be careful what you do, each implementation may have restrictions). This was used quite a lot (and still is) for daemons which simply listen on a TCP port and fork a copy of themselves to process a specific request while the parent goes back to listening.

Similarly, programs that know they're finished and just want to run another program don't need to fork, exec and then wait for the child. They can just load the child directly into their process space.

Some UNIX implementations have an optimized fork which uses what they call copy-on-write. This is a trick to delay the copying of the process space in fork until the program attempts to change something in that space. This is useful for those programs using only fork and not exec in that they don't have to copy an entire process space.

If the exec is called following fork (and this is what happens mostly), that causes a write to the process space and it is then copied for the child process.

Note that there is a whole family of exec calls (execl, execle, execve and so on) but exec in context here means any of them.

The following diagram illustrates the typical fork/exec operation where the bash shell is used to list a directory with the ls command:

fork() splits the current process into two processes. Or in other words, your nice linear easy to think of program suddenly becomes two separate programs running one piece of code:

This can kind of blow your mind. Now you have one piece of code with pretty much identical state being executed by two processes. The child process inherits all the code and memory of the process that just created it, including starting from where the fork() call just left off. The only difference is the fork() return code to tell you if you are the parent or the child. If you are the parent, the return value is the id of the child.

I think some concepts from "Advanced Unix Programming" by Marc Rochkind were helpful in understanding the different roles of fork()/exec(), especially for someone used to the Windows CreateProcess() model:

A program is a collection of instructions and data that is kept in a regular file on disk. (from 1.1.2 Programs, Processes, and Threads)

In order to run a program, the kernel is first asked to create a new process, which is an environment in which a program executes. (also from 1.1.2 Programs, Processes, and Threads)

It’s impossible to understand the exec or fork system calls without fully understanding the distinction between a process and a program. If these terms are new to you, you may want to go back and review Section 1.1.2. If you’re ready to proceed now, we’ll summarize the distinction in one sentence: A process is an execution environment that consists of instruction, user-data, and system-data segments, as well as lots of other resources acquired at runtime, whereas a program is a file containing instructions and data that are used to initialize the instruction and user-data segments of a process. (from 5.3 exec System Calls)

Once you understand the distinction between a program and a process, the behavior of fork() and exec() function can be summarized as:

Fork creates a copy of a calling process. generally follows the structure 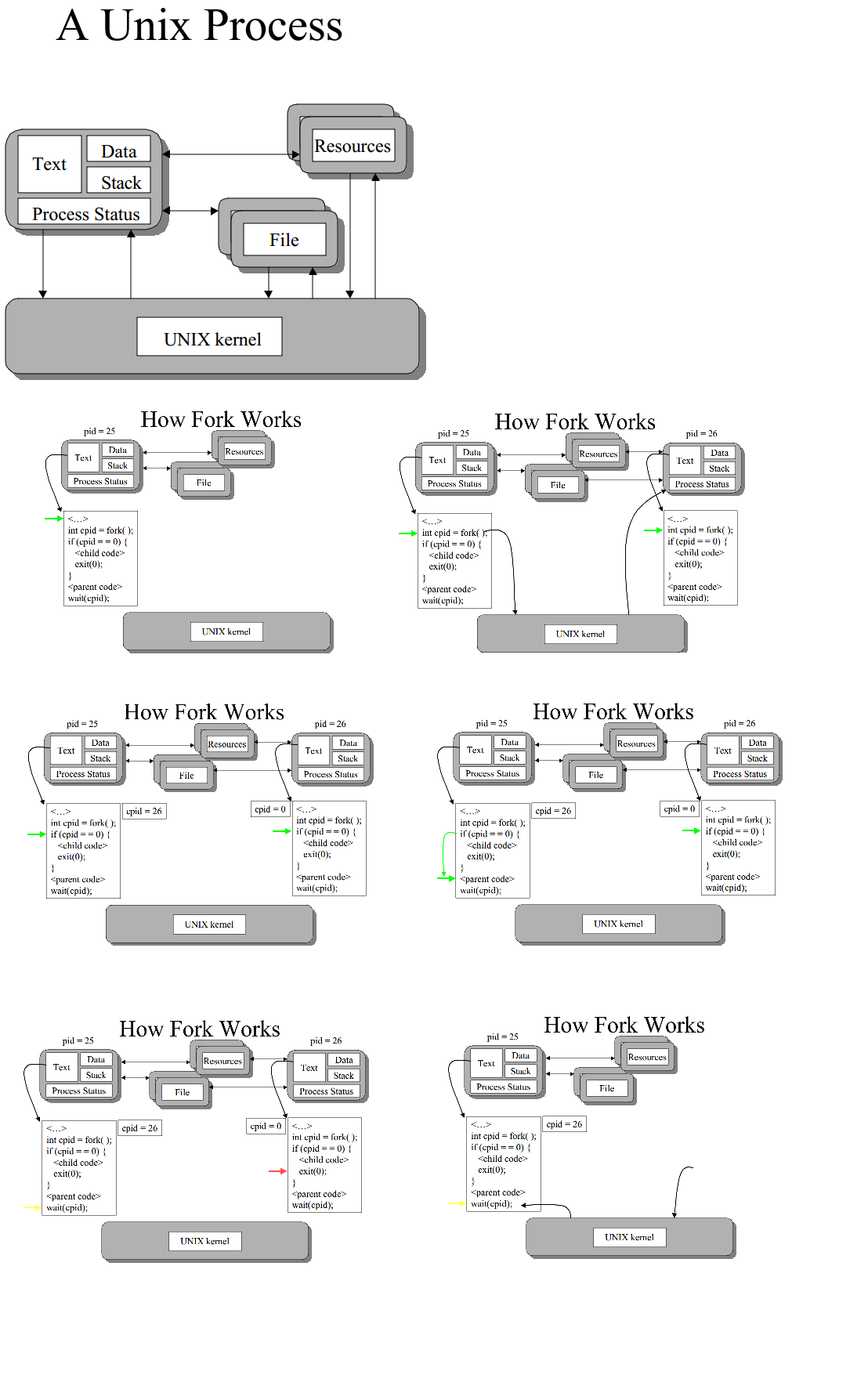 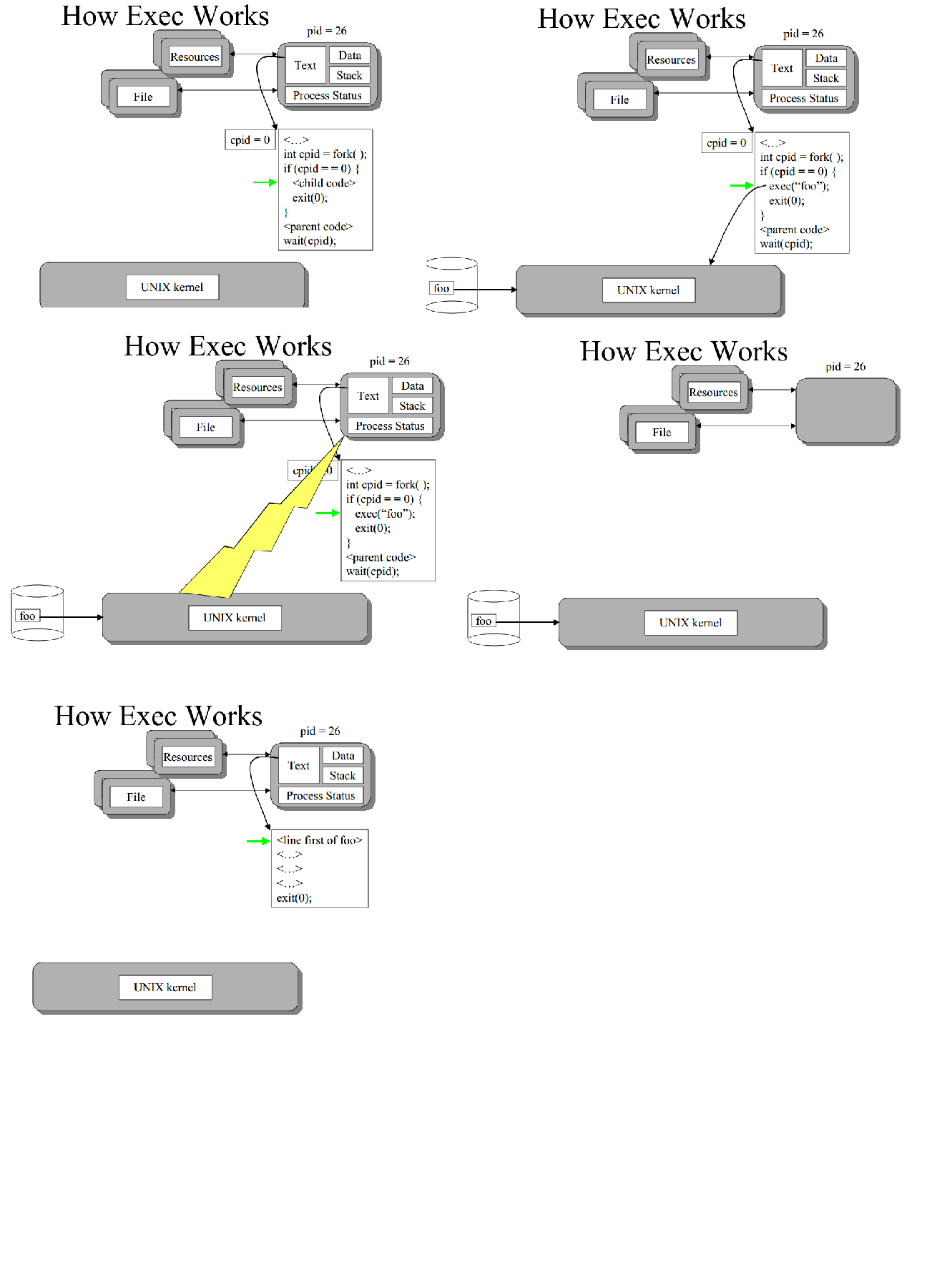 The main difference between fork() and exec() is that,

The fork() system call creates a clone of the currently running program. The original program continues execution with the next line of code after the fork() function call. The clone also starts execution at the next line of code. Look at the following code that i got from http://timmurphy.org/2014/04/26/using-fork-in-cc-a-minimum-working-example/

This program declares a counter variable, set to zero, before fork()ing. After the fork call, we have two processes running in parallel, both incrementing their own version of counter. Each process will run to completion and exit. Because the processes run in parallel, we have no way of knowing which will finish first. Running this program will print something similar to what is shown below, though results may vary from one run to the next.

The exec() family of system calls replaces the currently executing code of a process with another piece of code. The process retains its PID but it becomes a new program. For example, consider the following code:

This program calls the execvp() function to replace its code with the date program. If the code is stored in a file named exec1.c, then executing it produces the following output:

The program outputs the line ―Ready to exec() . . . ‖ and after calling the execvp() function, replaces its code with the date program. Note that the line ― . . . did it work‖ is not displayed, because at that point the code has been replaced. Instead, we see the output of executing ―date -u.‖

fork() creates a copy of the current process, with execution in the new child starting from just after the fork() call. After the fork(), they're identical, except for the return value of the fork() function. (RTFM for more details.) The two processes can then diverge still further, with one unable to interfere with the other, except possibly through any shared file handles.

exec() replaces the current process with a new one. It has nothing to do with fork(), except that an exec() often follows fork() when what's wanted is to launch a different child process, rather than replace the current one. 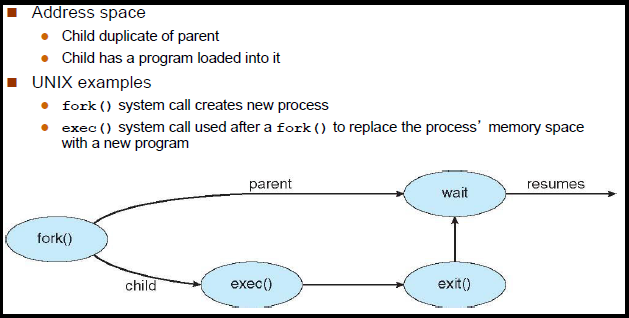 It initiates a new process within a process. It loads a new program into the current process, replacing the existing one.

When launching a new program is to firstly fork(), creating a new process, and then exec() (i.e. load into memory and execute) the program binary it is supposed to run.

The prime example to understand the fork() and exec() concept is the shell,the command interpreter program that users typically executes after logging into the system.The shell interprets the first word of command line as a command name

For many commands,the shell forks and the child process execs the command associated with the name treating the remaining words on the command line as parameters to the command.

1
How can I keep execv from killing my program?
0
Pass Control form one Executable to another C++
-1
Use of exec command in process creation
0
Both fork() and the exec() system calls
155
What is the closest thing Windows has to fork()?
244
The difference between fork(), vfork(), exec() and clone()
50
How does fork() know when to return 0?
10
Why the address of variable of child process and parent process is same
4
Variable values in Fork() child
3
C Processes fork()
See more linked questions