I have this very simple markup

Here it is rendered on a jsfiddle.

I'm sure that Bootstrap is the cause, since when you remove it, the text renders as expected. Any ideas or workaround for this? 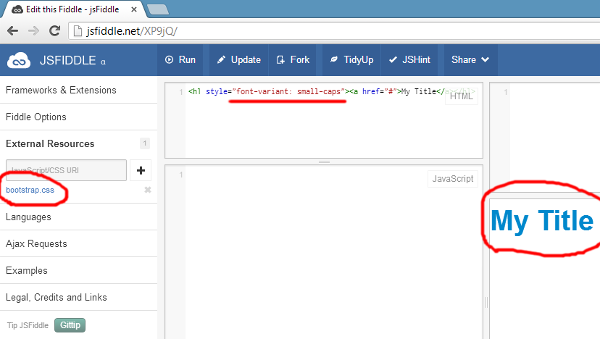 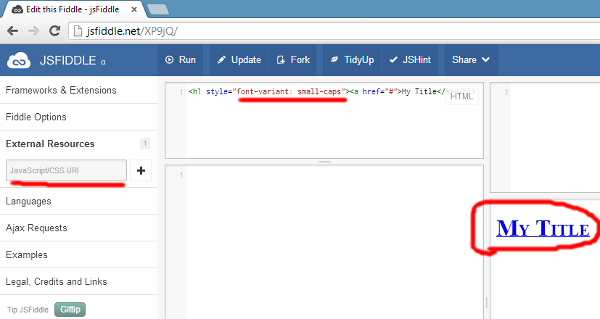 The problem appeared because Twitter Bootstrap has this rule:

text-rendering: optimizelegibility; doesnt play well with small-caps in Google Chrome for some reason.

As strange as it is, the issue is actually Chrome, and the fact that you are putting the font-variant: small-caps; on a tag which resides inside an H# tag.

Apparently, Chrome is unable to honor small-caps on H# tags and their descendants at this time. Please take a look at this update to your fiddle to see what I mean.

You might have better luck altering your HTML to simply style a <span>, <p>, or <div> element to look like an <h1> element in this case - because Chrome will then honor your small-caps style.

Seeing the others' posts - I've noticed that the text-rendering: auto actually forces Chrome back into proper rendering. This update to the jsFiddle demonstrates this fix. Credit for the workaround to Martin.

So apart from the technical problem that prevents some browser from using fake small caps and that might have been solved, the basic problem remains: you don’t get true small caps. To get them, you would need a typeface that contains small caps, some additional markup, some advanced CSS rules (like font-feature-settings) that take small caps into use, and a modern browser that supports those CSS constructs. And most fonts that are commonly available in people’s computers don’t have real small caps.

The morale is: use other typographic devices instead of small caps.

Not the answer you're looking for? Browse other questions tagged css twitter-bootstrap or ask your own question.