Ask Question
Asked 8 years, 8 months ago
Active 2 months ago
Viewed 999k times
452
Closed. This question needs to be more focused. It is not currently accepting answers.

The community reviewed whether to reopen this question last month and left it closed:

The AVD Manager in Android Studio doesn't show my device but adb devices does show it. Am I missing something obvious here?

I have been troubleshotting same problem. I have tried all the tips in this topic in posts above me.

My situation was: - computer have seen my tablet - had debug usb options in developer mode on - adb in sdk was not seeing my device, killing & start didnt help

The problem was I had Samsung Galaxy drivers on my win8. When I went to devices manager, there was Lenovo A7600 Tablet with yellow marking. Settings -> actualize drivers -> choose from existing ones and i hooked up the Samsung drivers to this one.

If every configuration is sorted, what worked for me was to switch the device to be connected at PTP and then back to MTP.

Switching to PTP USP Option instead of MTP is the solution.

None of above answers solved my problem until I updated SDK platform-tools.This maybe one of the causes of this issue.

I use the Android version of Nougat API 24, I solved a device problem not detected by replacing the USB cable.

There are many reasons why Android Studio doesn't see mobile phone.

One of them is a problem with ADB Interface driver. You can check it in your Device Manager: 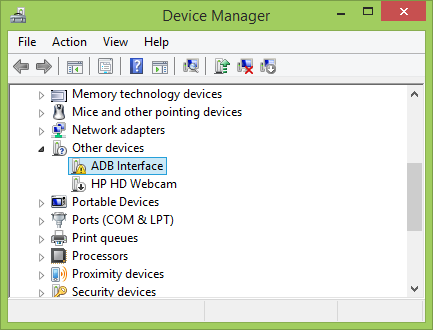 If you don't have ADB Interface driver, then use this guide to install it for Intel chipset: Installing the Android Debug Bridge (ADB) USB Driver on a Windows Computer.

If you have other, but not Intel, then try to search for the driver on manufacture's web-site.

For Xiaomi phones, turn off MIUI optimization in the very bottom of Developers mode menu.

Surprisingly enough, what worked for me on Debian Linux was ONLY:

WITHOUT STARTING IT AGAIN!!!

The device appeared in the Android Studio as soon as I killed the server. The only reason I spotted this was that my terminal emulator window was transparent. :D

For Samsung Galaxy s4 i resolved issue by instaling Kies software, after that everything works like a charm.

I was facing the same issue. Turned out to be a faulty data cable. The device would start charging but would not show up in connected devices in Android Studio.

Try another cable first if you have been using your current one for a while.

The idea is to fix USB driver on your computer. Start -> Device Manger -> Other devices. Right click on the USB device then Update Driver Software -> Browse my Computer ..-> Let me pick... -> Android device -> Next.

So I am using Android Studio 3.1 and nothing above worked. The only thing that fixed the problem is enabling the checkbox of "Use libusb backend" See attached 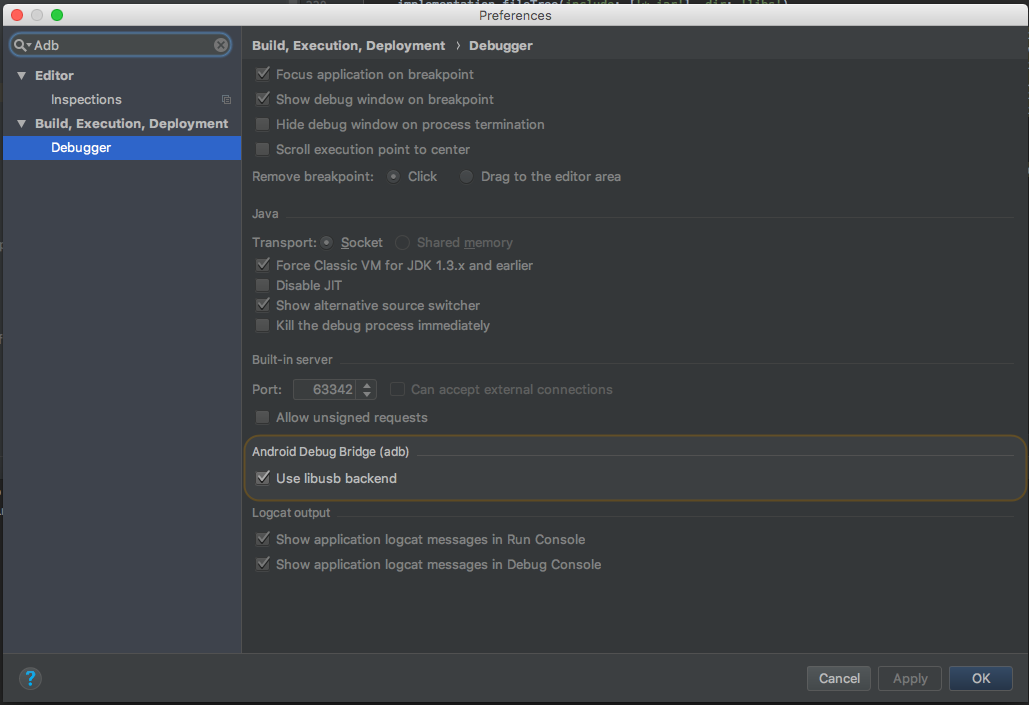 It's my first time running Android project today through Android Studio since its 2.x version, and I have the same problem. However, this is with the Flutter plugin. I have a workaround for people with similar setup.

After that, my observation

But at least I'm no longer blocked.

If your device was working with Android Studio before this issue, then restarting the device can solve the problem.

Make sure to turn on USB Debugging from Developer Options again after restarting.

In my case, enabling USB Debugging in Developer Options solved the problem. Make sure to grant required permissions upon reconnecting the phone.

Do the following steps to solve above issue.

In my case, and I know this is dumb, but here's what I had to do.

I had tried all the solutions above and none worked. A good key to t-shooting is when adb devices won't list the device, then you know you aren't cooking with gas yet.

Switching between USB modes won't have an effect until the device registers as a device over adb. You'll know when that happens because you'll get a prompt about an RSA key.

It was a relatively new install of Windows 7. Under USB in my phone's notification area, I switched to Install Driver and let it install my adb driver. In my case I was never going to get anything legit over the internet.

Once I saw that successfully install, I switched to PTP and it all just worked.

Android Studio did not show my device (Samsung Galaxy Alpha) on Windows too until I downloaded and installed a Windows driver from Samsung Support page. I had to use the MTP connection mode on the device. I also confirmed authorizing the computer after I connected the device to it for the first time.

I also had this problem. After looking though my edge 6 the enable usb debugging was greyed out and unable to be turned on. Quick google search showed it was the myKnox security program that was stopping this from being used. all you need to do is uninstall myKnox and you can then allow usb debugging. This solved my problem with the choose device dialog now showing my connected phone.

not sure if this question is still open. But I solved the issue by switching to a different usb cable. hopefully, this can save you a couple hours. lol

In case anyone having problem with Samsung GT-I9060 I followed this answer on SO:

If you are on windows, many times it will not recognize the device fully and because of driver issues, the device won't show up.

And look for any devices showing an error. Many androids will show as an unknown USB device. Select that device and try to update the drivers for it.

if your Windows cannot even install the driver, you should go to Device Manager and get the Device ID (right click on your device->Properties->Details->Hardware Ids (in Property). Install the Google USB drivers from Android Studio. Go to android_winusb.inf file (under ANDROID_SDK_DIR/extras/google/usb_driver/) and add your Device ID according to the file format. Run "adb devices" again and everything works fine.

Please see http://visualgdb.com/KB/usbdebug-manual/ as this worked well for me. Had to download and install the USB drivers inside Android studio then actually install the drivers via device manager in windows 8.1

I'm sure this might be useful for someone out there. In my case I am running Android Studio in a mac and also trying Visual Studio Xamarin. Having both of them opened at the same time was creating this conflict. So closing Visual was enough.

Many answers already but I had just downloaded a simulator running O, and after that no device ever worked again. I deleted the emulator from AVD manager killed adb and then restarted Android studio. Moved the USB to another port and the device was there again.

After updating to Android Studio 3.1, it stopped seeing my devices, but adb saw them fine.

To resolve this, you need to start debugging with an emulator once and after that switch back to USB Device in Run -> Edit configurations... -> Target. This time it should work.

There are a lot of changes in Android Studio 3.1 vs its previous versions, so you have to kinda reset debug target in order to make your devices work.

Not the answer you're looking for? Browse other questions tagged android android-studio adb device avd or ask your own question.