I need to add .jpg at the end of all he cells in one or more columns

Detailed step-by-step instructions are much appreciated since I am very new to Calc. Thanks

Do you need to do this once or is this going to be a repeated task every week/month?

If it is something you need to do just once, here is what you can do:

Next (right) to the column where your numbers are open (insert) a new column. Assuming the following: Numbers are in column A, New column is column B.

In this new column B in the top cell (B1) write:

Now copy B1 all the way down to the end. In B1 type [Ctrl]+c then Hold [Shift] and hit [PgDn] until the end then press [Ctrl]+v. Highlight Column B, [Ctrl]+c, then [Edit] [Paste Special] values only (No formula's) this freezes the calculated data.

This is just another option,

just click the function wizard and select concatenate, in that enter which column you want to enter as text1 as and second column in text2. Then when you click OK you will get an concatenated column like below image

so in the C column you will get as a1.jpg.

For those who continue to find this question (as I did):

This can be quickly done using regular expression option of find and replace. (I don't know what version of Calc introduced regex searches, but 6.2.4 has it.)

This will update the values in-place and does not require any additional columns or formulas.

There's a much more elegant way to do this that doesn't require sacrificing cells just to hold data types, and can be scaled to work with one cell or a large chart range.

Add both pieces of data into the =CONCAT() function

Make sure to use CONCAT instead of CONCATENATE, as `CONCAT accepts cell ranges and is more dynamic.

Open the Function Wizard on the cell in question, and build the following function:

The result should be something like this. In my example, the cell in question is the final value of Ethereum on a balance sheet: 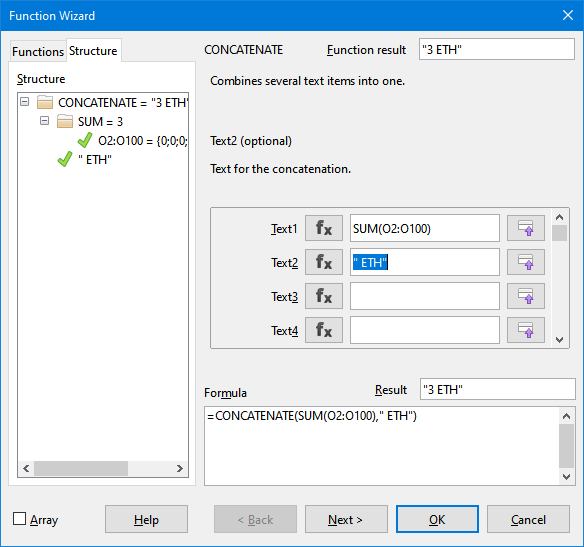 The above example was an easy one, since it was being used as a test, all my summed values were ints, if I had floating point numbers, they would run away to max decimal places (not very pretty).

The function will drag out and expand intelligently to other cells like any other formula.

Adjusting accuracy of floating point values inside a CONCAT function

Sometimes, adding a cell results in a rounding problem, or an extreme amount of decimal places. You can further nest your function using ROUND(<your_data>,<decimal_places>) 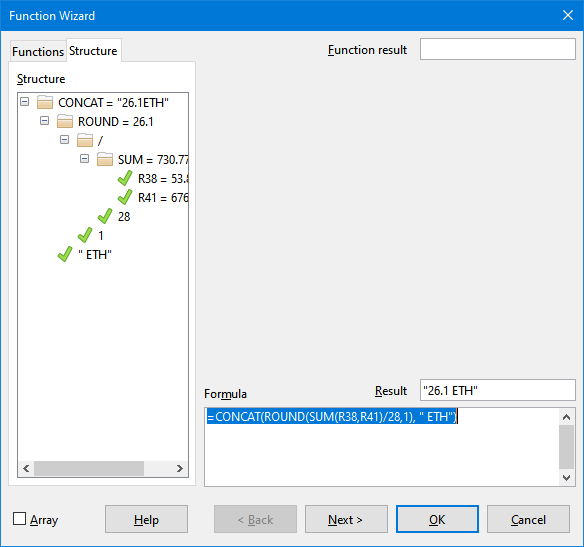 In your specific case, you don't need a space in the second argument as you want to append .jpg directly to the end of the string. `

This is extremely repeatable, and using the Macros feature, you can automate these to make much more simplified functions that allow you to enter just the variables you need, while the macro does the work in the background.

Based on Emmanuel Angelo R.’s answer, I would advice learning to differentiate between fixed cell references and dynamic ones. The following applies:

In cell B3, type =concatenate(A3;$a$1).² If your locale requires comma as separator, replace my semicolons with commas. Copy cell B3 by selecting it and pressing Ctrl + C. Move the cursor to cell A3, press Ctrl + ↓ (down arror on your cursor keys); this will move you to the bottom of the list of file names. Move your cursor right, then press Ctrl + Shift + ↑; this will select all cells up to the last cell with contents (the one you just wrote your formula in). Press Ctrl + V to paste your contents.

Adding dollar signs in front of your row/column coordinates, will lock that coordinate when pasted. Say you had a list of file types in cells b1–z1 (e.g. jpg, jpeg, tga, bmp, png et c.). An easy way to create the formula would then be by first typing it in cell B3 as =concatenate(A3;B$1), then paste it to every cell till the end of your file names list (cell z3); these cells would then read …A3;b$1, …A3;C$1 et c. When copying it for all the rows below

You could select the entire range of cells with formulas in row 3 and run a search and replace, replacing all instances of ‘A3;’ by ‘A3;$’, effectively inserting a dollar in front of all the cell references, allowing you to, should the need arise, copy it horizontally as well as vertically (the latter being covered by the $ in front of 1).

¹ This means cells from A3 and however far down your sheet goes ² Strictly speaking, it is only necessary to type it as a$1.

Not the answer you're looking for? Browse other questions tagged append libreoffice openoffice-calc or ask your own question.

3113
What is the difference between Python's list methods append and extend?
2891
How to append something to an array?
1807
How to redirect and append both standard output and standard error to a file with Bash
719
How do I append one string to another in Python?
1926
How do I append to a file?
0
OpenOffice Calc complex functions
4
openoffice calc - newline causes duplicate value in cells (pandas/openpyxl)
0
Merging cells in openoffice deleting specific whitespace
0
Split data in a cell to new columns Openoffice Calc