I have two forms, one is the main form and the other is an options form. So say for example that the user clicks on my menu on the main form: Tools -> Options, this would cause my options form to be shown.

My question is how can I send data from my options form back to my main form? I know I could use properties, but I have a lot of options and this seems like an tedious odd thing to do.

So what is the best way?

Form1 triggers Form2 to open. Form2 has overloaded constructor which takes calling form as argument and provides its reference to Form2 members. This solves the communication problem. For example I've exposed Label Property as public in Form1 which is modified in Form2.

With this approach you can do communication in different ways. 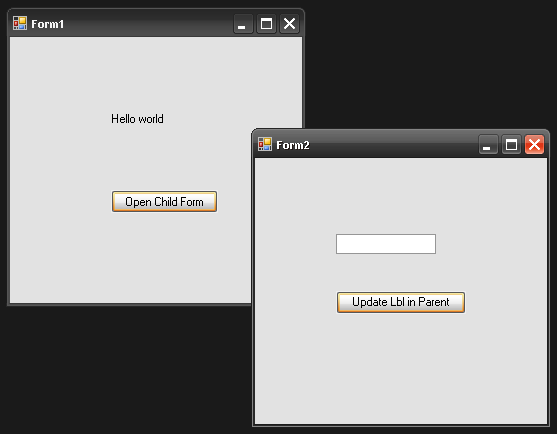 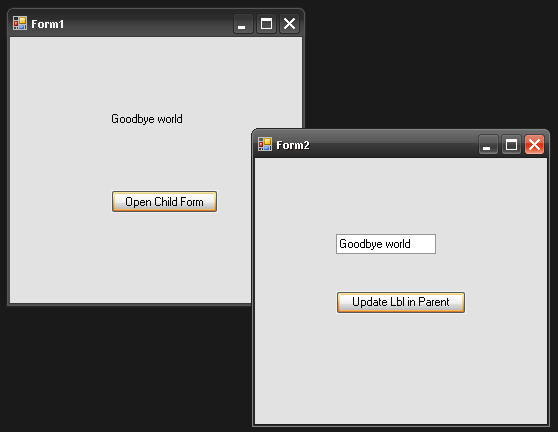 In the comments to the accepted answer, Neeraj Gulia writes:

This leads to tight coupling of the forms Form1 and Form2, I guess instead one should use custom events for such kind of scenarios.

The comment is exactly right. The accepted answer is not bad; for simple programs, and especially for people just learning programming and trying to get basic scenarios to work, it's a very useful example of how a pair of forms can interact.

However, it's true that the coupling that example causes can and should be avoided, and that in the particular example, an event would accomplish the same thing in a general-purpose, decoupled way.

Here's an example, using the accepted answer's code as the baseline:

The above code creates a new instance of Form2, and then before showing it, adds an event handler to that form's Button1Click event.

Note that the expression (sender, e) => Lbl.Text = ((Form2)sender).Message is converted automatically by the compiler to a method that looks something similar to (but definitely not exactly like) this:

There are actually lots of ways/syntaxes to implement and subscribe the event handler. For example, using an anonymous method as the above, you don't really need to cast the sender parameter; instead you can just use the frm local variable directly: (sender, e) => Lbl.Text = frm.Message.

Going the other way, you don't need to use an anonymous method. You could in fact just declare a regular method just like the compiler-generated one I show above, and then subscribe that method to the event: frm.Button1Click += frm_Message; (where you have of course used the name frm_Message for the method, just as in my example above).

Regardless of how you do it, of course you will need for Form2 to actually implement that Button1Click event. That's very simple…

Note that all that the event does is to alert the subscriber that the button has in fact been clicked. It's up to the subscriber to decide how to interpret or react to that event (e.g. by retrieving the value of the Message property and assigning it to something).

Alternatively, you could in fact deliver the text along with the event itself, by declaring a new EventArgs sub-class and using that for the event instead:

Then the subscriber can just retrieve the message value directly from the event object:

The important thing note in all of the above variations is that at no point does the class Form2 need to know anything about Form1. Having Form1 know about Form2 is unavoidable; after all, that's the object that will create a new Form2 instance and use it. But the relationship can be asymmetrical, with Form2 being usable by any object that needs the features it offers. By exposing the functionality as an event (and optionally with a property), it makes itself useful without limiting its usefulness to only the Form1 class.

The best in this case would be to have some OptionsService class/interface that is accessible via IServiceProvider.

Just add an event when something changes, and the rest of the app can respond to it.

There are lots of ways to perform communication between two Forms. Some of them have already been explained to you. I am showing you the other way around.

Assuming you have to update some settings from the child form to the parent form. You can make use of these two ways as well :

You can think of it as a callback function passed to the child form.

This method is easy (2 lines). But only works with forms that are open. All you need to do is add these two lines where ever you want to pass some data.

Create a Class and put all your properties inside the class .. Create a Property in the parent class and set it from your child (options) form

You can have a function in Form B like so:

MVC, MVP, MVVM -- slight overkill for someone admittedly saying they want tutorials. Those are theories that have entire courses dedicated to them.

As already posted, passing an object around is probably easiest. If treating a class as an object (interchangeable in this sense) is new, then you may want to spend another 2-4 weeks figuring out properties and constructors and such.

I'm not a C# master by any means, but these concepts need to be pretty concrete if you want to go much further beyond passing values between two forms (also classes/objects in their own right). Not trying to be mean here at all, it just sounds like you're moving from something like VB6 (or any language with globals) to something far more structured.

This is probably sidestepping your problem a little bit, but my settings dialog uses the Application Settings construct. http://msdn.microsoft.com/en-us/library/k4s6c3a0.aspx

I can't find a good example that's similar to how I do it (which is actually having an actual class+object), but this covers another way of doing it:

A form is a class, just like any other class. Add some public variables to your form class and set them when they click the button to close the form (technically they are just hiding it).

A VB.NET example, but you'll get the idea -

etc. Set them when they hit the "Ok" button.

So in your main form, when they hit the "options" button - you create your options form:

when it exits, you harvest your option settings from the public variables on the form:

The observer pattern is a software design pattern in which an object, called the subject, maintains a list of its dependents, called observers, and notifies them automatically of any state changes, usually by calling one of their methods. (Wikipedia)

the way i do this is creating an Observer class, and inside it write something like this:

so basically: the first line says that there would be a function that somebody else will implement

so in your UserControl, you should add a function like this:

and in your Form you should do something like:

and now, you can register this function to a whole bunch of other controls and containers and they will all get the signal

I hope this would help :)

Not the answer you're looking for? Browse other questions tagged c# winforms properties or ask your own question.