I'm using Xcode (4.6.2) and my target is an external build tool. The auto generated scheme calls that just fine during build.

On RUNNING, I wanted the scheme to execute another shell script. It wasn't intuitive, but I managed it by setting /bin/bash as executable and passing my script as parameter.

The only step left is that I want to execute yet another script AFTER run. And here I thought it'd be easy and just tried to set it as a post-action.

BUT no matter what, I can't get xcode to execute my post-action script. No matter what it is. I tried echo hi > /tmp/testfile even...

I need that post-action to do a bit of cleanup.

Can't get Xcode to run my post-action script or any.

I suggest you enable logging to a file by adding exec > /tmp/xcode_build.log 2>&1 to the beginning of your run script phase.

You can than see the log by running cat /tmp/xcode_build.log in terminal

This will allow you to print out paths, etc and verify functionality of your scripts.

To print location of the script, you can put following in your post-action:

It will not run when you click on Stop in Xcode, or terminate the program otherwise. For my case, it works when I press CMD-Q while the program is in focus. 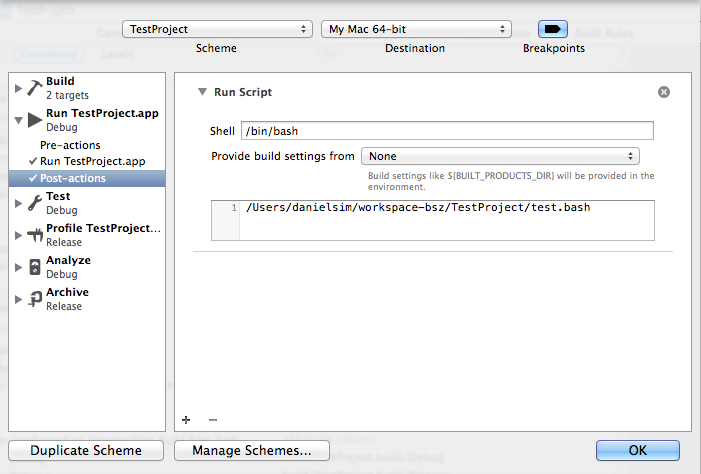 If anyone else comes across this, I was using a script file in my project directory and the file did not have the right permissions for the build process to run the script. I did the following in the pre/post action/Run Script area

It's a bit odd, but Archive executes pre and post scripts when called from command line.

So I've made an archive.sh script in my project folder, I pass the name of project ( same as main target - but you can configure that as you like ) as a parameter:

Then I create an "External Build" target name "Archive", with ./archive.sh as script.

When I build this target, Project is cleaned, build and archived. and post script defined in the scheme is executed

Just a remark, since I'm building from a shell script, I've removed my post script in the archive scheme, and instead call it after my build commands in my archive.sh script.

This way gives me a better control on working directories, variables and all… It's much more convenient

Depending on programming language you use you can do (it's pseudocode):

For me, the "not working" effect was caused by a directory path lookup failure in my script.

If you run your script at your target's Build Phases, A relative directory path like this will work:

However in Pre-Actions it fails silently. Instead, you must use an absolute directory path like this:

Not the answer you're looking for? Browse other questions tagged xcode bash or ask your own question.

22
Is it normal for Xcode not to detect if a pre-action failed?
1
Can't get environment variable "ACTION" during compile target in Xcode
1
Xcode 4 workspace and scheme's pre-action
280
Xcode : failed to get the task for process
901
Xcode error "Could not find Developer Disk Image"
213
"No such module" when using @testable in Xcode Unit tests
911
Xcode 10 Error: Multiple commands produce
272
Xcode 10: A valid provisioning profile for this executable was not found
1
Is it possible to distinguish between Building and Cleaning in the scheme's Build post-action?