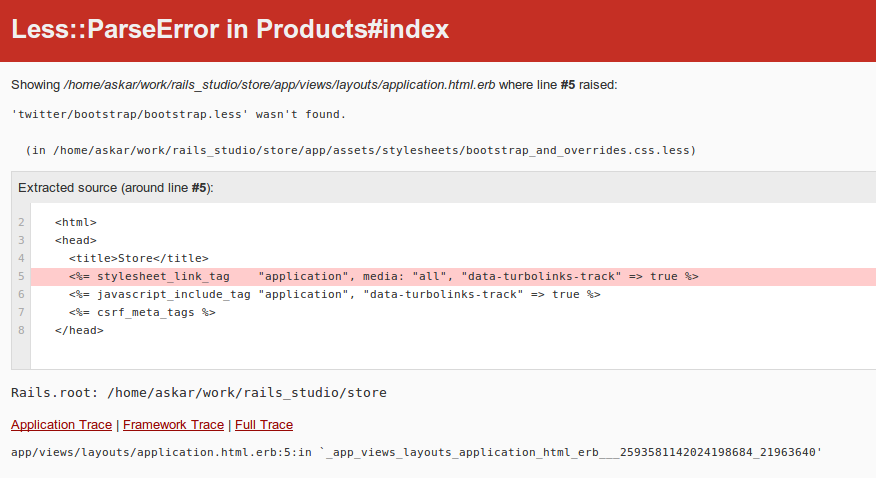 Requiring Bootstrap LESS (bootstrap_and_overrides.css.less) in your application.css is meaningless here, because the pipeline comes already with "require_tree ." which automatically includes everything inside the folders of the asset pipeline.

After pulling my hair for several hours, I found that removing the 3 required gems from the group :asset in the Gemfile is the only way to fix it

So, Do Not do this in you Gemfile:

And instead DO this:

The Bootstrap gem comes with it's own bundled version of Bootstrap which it will take responsibility for importing. Don't import the Bootstrap gem in the :assets group, or the gem assets won't be found.

Note that the assets group has been removed in Rails 4.

You have to require Bootstrap LESS (bootstrap_and_overrides.css.less) in your application.css

I was using Bootstrap 2 and less on Rails 4.0.1. I decided to upgrade to Bootstrap 3 but "twitter-bootstrap-rails" is still on Bootstrap 2. There are a few gems available but I found the simplest approach was to add the css, js and fonts manually (followed these instructions Using bootstrap 3 with rails 4).

Follow these instructions, ensure "therubyracer" and "less-rails" gems are installed and then a few more steps are required to get less working with bootstrap 3 and rails 4:

Hope this is useful to anyone wanting to try Bootstrap 3 with less.

for me, less-rails gem was missing from Gemfile and adding it and running bundle solved the issue.