How to cherry-pick multiple commits

I have two branches. Commit a is the head of one, while the other has b, c, d, e and f on top of a. I want to move c, d, e and f to first branch without commit b. Using cherry pick it is easy: checkout first branch cherry-pick one by one c to f and rebase second branch onto first. But is there any way to cherry-pick all c-f in one command?

Here is a visual description of the scenario (thanks JJD): 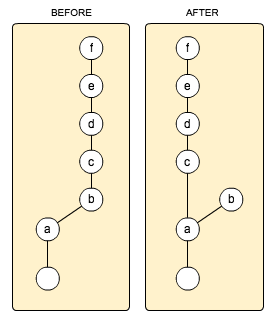 Git 1.7.2 introduced the ability to cherry pick a range of commits. From the release notes:

git cherry-pick learned to pick a range of commits (e.g. cherry-pick A..B and cherry-pick --stdin), so did git revert; these do not support the nicer sequencing control rebase [-i] has, though.

To cherry-pick all the commits from commit A to commit B (where A is older than B), run:

If you want to ignore A itself, run:

(Credits to damian, J. B. Rainsberger, sschaef, Neptilo, Pete and TMin in the comments.)

If you have selective revisions to merge, say A, C, F, J from A,B,C,D,E,F,G,H,I,J commits, simply use below command:

The simplest way to do this is with the onto option to rebase. Suppose that the branch which current finishes at a is called mybranch and this is the branch that you want to move c-f onto.

Or the requested one-liner:

You can use a serial combination of git rebase and git branch to apply a group of commits onto another branch. As already posted by wolfc the first command actually copies the commits. However, the change is not visible until you add a branch name to the top most commit of the group.

Please open the picture in a new tab ... 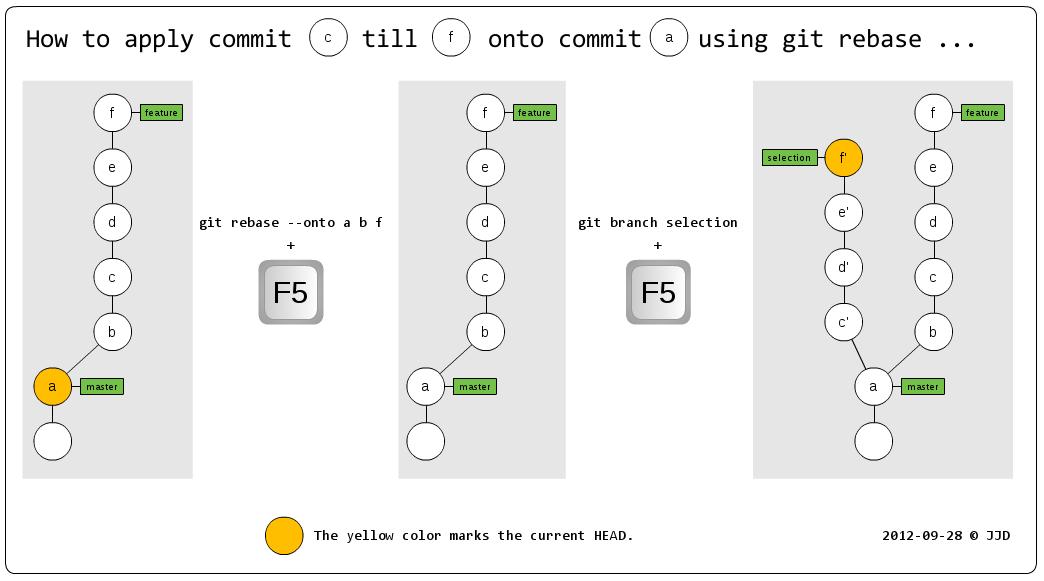 To summarize the commands in text form:

This should clarify things:

Afterwards, you could use git checkout feature && git reset --hard b to delete the commits c till f from the feature branch.

In addition to this answer, I wrote a blog post which describes the commands in another scenario which should help to generally use it.

To apply J. B. Rainsberger and sschaef's comments to specifically answer the question... To use a cherry-pick range on this example:

How to cherry-pick a single commit, multiple commits, or a range of commits

1. to cherry-pick a single branch or commit named commit

Note that you can cherry-pick any number of commit hashes at once, and in any order you want. They will simply be applied one-at-a-time, and in the order you specify. If any conflicts arise, you will have to resolve them one-at-a-time then use git add my_file then git cherry-pick --continue when done to continue the cherry-pick process.

3. to cherry-pick a range of commits

I originally learned the basics of this style from the most-upvoted answer by @Eric Darchis here.

Note: commit~, commit~1, and commit^ all mean "one commit prior to commit", or otherwise said: "the commit before commit".

To specify two commits prior to commit, you can use syntax like this:

To specify three commits prior to commit, you can do this:

This does NOT work:

To test the above "previous commit syntax" concepts yourself, the easiest way is with the git log command. Ex:

4. To cherry-pick a range of your peer's commits onto your branch

...when their branch peer_branch is forked off of an earlier version of your branch my_branch.

Let's say you are working on your feature branch my_branch, and your peer wants to help make some changes for you to help you on your feature. You have already pushed my_branch to the remote named origin. So, they are going to fetch your remote branch named my_branch to their local computer, fork their own branch named peer_brach off of it, then push to their own branch named peer_branch. Once they do that, you will cherry-pick all of their additions at once. This is what the first part of this process looks like:

Now that they have pushed all of their changes to remote origin as their own branch named peer_branch, you can cherry-pick all of their commits they added on top of your work like this:

For your understanding, that cherry-pick command just above, with 3 dots in it, is exactly equivalent to this longer command:

To read more about that 3-dot syntax, see here: What are the differences between double-dot ".." and triple-dot "..." in Git diff commit ranges? [duplicate]. For help on git checkout -b new_branch from_branch, see my answer here: Various ways to create a branch in git from another branch

Another variant worth mentioning is that if you want the last n commits from a branch, the ~ syntax can be useful:

In this case, the above command would pick the last 4 commits from a branch called some-branch (though you could also use a commit hash in place of a branch name)

To cherry pick from a commit id up to the tip of the branch, you can use:

Actually, the simplest way to do it could be to:

You will see something like this in the interactive rebase:

Then remove lines b (and any others you want)

I need cherry pick a commit from one branch to another on priority, but commits here were difficult to understand, hope below helps with a easy one:

Procedure to do below:

1 . Get commit details from "dev" branch

To do multiple at once, only 1 change in the above, give all commit ids in sequence:

Use this command: (by partial hash)

Here's a script that will allow you to cherry-pick multiple commits in a row simply by telling the script which source and target branches for the cherry picks and the number of commits:

To cherry-pick from your branch to master (uses the current branch as source):

To cherry-pick the latest 5 commits from your 6.19.x branch to master:

You can multi-select commits in the history tab of the source branch, then right-click to get the option "Cherry-Pick Selected Commits".

In addition to commit-ish, you can pipe in a list of SHAs from stdin.

rev-list is basically the plumbing command (the "ugly" but fast cousin) of git-log NB that --reverse is needed.

You can do more advanced stuff this way rather than simply a commit range.

Not the answer you're looking for? Browse other questions tagged git git-rebase cherry-pick or ask your own question.

32
Multiple commits cherry-picking
12
Cherry-pick a pull request into a branch?
0
How to `git cherry-pick` a series?
1453
Create a branch in Git from another branch
786
How to cherry-pick a range of commits and merge them into another branch?
243
What are the differences between double-dot ".." and triple-dot "..." in Git diff commit ranges?
240
How can I push a local Git branch to a remote with a different name easily?
209
How do I merge a specific commit from one branch into another in Git?
385
What Git branching models work for you?
211
Who is "us" and who is "them" according to Git?
See more linked questions

3878
Undoing a git rebase
10544
How do I undo 'git add' before commit?
24460
How do I undo the most recent local commits in Git?
3905
Delete commits from a branch in Git
19281
How do I delete a Git branch locally and remotely?
950
Is it possible to cherry-pick a commit from another git repository?
1764
How can I get a list of Git branches, ordered by most recent commit?
2505
What is the best (and safest) way to merge a Git branch into master?
10525
How do I rename a local Git branch?
2988
What does cherry-picking a commit with Git mean?