After creating the instance, I can login using gcutil or ssh. I tried copy/paste from the ssh link listed at the bottom of the instance and get the same error message.

The permission denied error probably indicates that SSH private key authentication has failed. Assuming that you're using an image derived from the Debian or Centos images recommended by gcutil, it's likely one of the following:

How to determine what accounts and keys are on the instance:

There's a script that runs every minute on the standard Compute Engine Centos and Debian images which fetches the 'sshKeys' metadata entry from the metadata server, and creates accounts (with sudoers access) as necessary. This script expects entries of the form "account:\n" in the sshKeys metadata, and can put several entries into authorized_keys for a single account. (or create multiple accounts if desired)

In recent versions of the image, this script sends its output to the serial port via syslog, as well as to the local logs on the machine. You can read the last 1MB of serial port output via gcutil getserialportoutput, which can be handy when the machine isn't responding via SSH.

gcutil ssh does the following:

A few ways this could break down, and what you might be able to do to fix them:

Ensure that the permissions on your home directory and on the home directory of the user on the host you're connecting to are set to 700 ( owning user rwx only to prevent others seeing the .ssh subdirectory ).

I was facing this issue for long time. Finally it was issue of ssh-add. Git ssh credentials were not taken into consideration.

I had the same problem and for some reason The sshKeys was not syncing up with my user on the instance.

I created another user by adding --ssh_user=anotheruser to gcutil command.

I just experienced a similar message [ mine was "Permission denied (publickey)"] after connecting to a compute engine VM which I just created. After reading this post, I decided to try it again.

That time it worked. So i see 3 possible reasons for it working the second time,

I suspect the last is unlikely :)

I found this error while connecting ec2 instance with ssh. and it comes if i write wrong user name.

You haven't accepted an answer, so here's what worked for me in PuTTY: 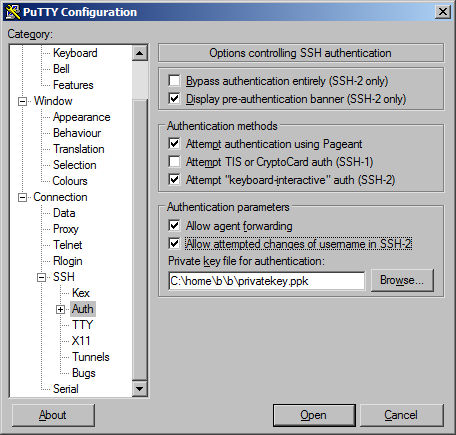 Without allowing username changes, i got this question's subject as error on the gateway machine.

If get "Permission denied (publickey)." with the follow command ssh -i ~/.ssh/my-ssh-key [USERNAME]@[IP_ADDRESS] you need to modify the /etc/ssh/sshd_config file and add the line AllowUsers [USERNAME]

Then restart the ssh service with

if you get the message "Could not load host key: /etc/ssh/ssh_host_ed25519_key" execute: ssh-keygen -A

I followed everything from here: https://cloud.google.com/compute/docs/instances/connecting-to-instance#generatesshkeypair

But still there was an error and SSH keys in my instance metadata wasn't getting recognized.

Solution: Check if your ssh key has any new-line. When I copied my public key using cat, it added into-lines into the key, thus breaking the key. Had to manually check any line-breaks and correct it.

The trick here is to use the -C (comment) parameter to specify your GCE userid. It looks like Google introduced this change last in 2018.

If the Google user who owns the GCE instance is myname@gmail.com (which you will use as your login userid), then generate the key pair with (for example)

When you paste mykeypair.pub into the instance's public key list, you should see "myname" appear as the userid of the key.

Setting this up will let you use ssh, scp, etc from your command line.

Not the answer you're looking for? Browse other questions tagged google-compute-engine or ask your own question.