I'm a developer and i was thrilled when I was watching Google IO 2013 and learned about the new Beta testing feature. So I created a Google+ community and a google group and placed the testers in there (me included). 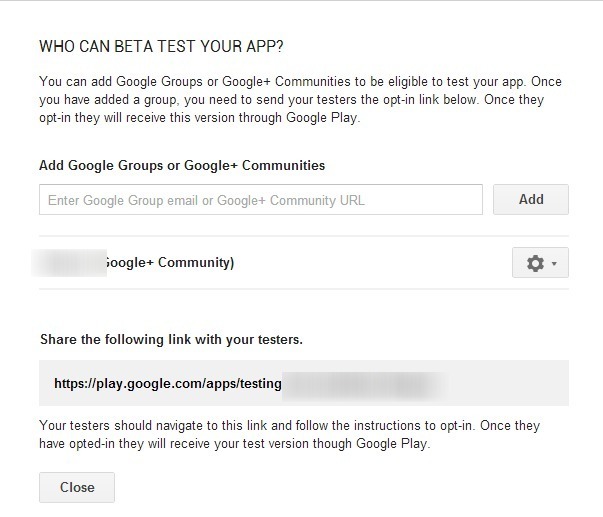 All we get (the developers and testers) when we visit the https://play.google.com/apps/testing/com.package.stuff is this:

Is there any trick I am missing? I would really like to use this feature.

I know there are alternatives like https://testflightapp.com/ but I'd rather keep my app under this environment where I can "promote" the Beta apk to the Production phase and so on.

I had this same issue. The reason the link is not working is because the app must be published before the link will be active. I repeat the app must be published, this does not mean there must be an APK in production. On the top right of your applications developer console page there is a drop down menu that allows you to publish the app. That link will become active immediately and your app will be available in a few hours to your testers on the Play Store. 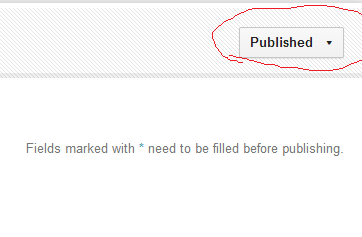 First of all you need to create or have a Google+ community.

If everything is right, the link should show something like: 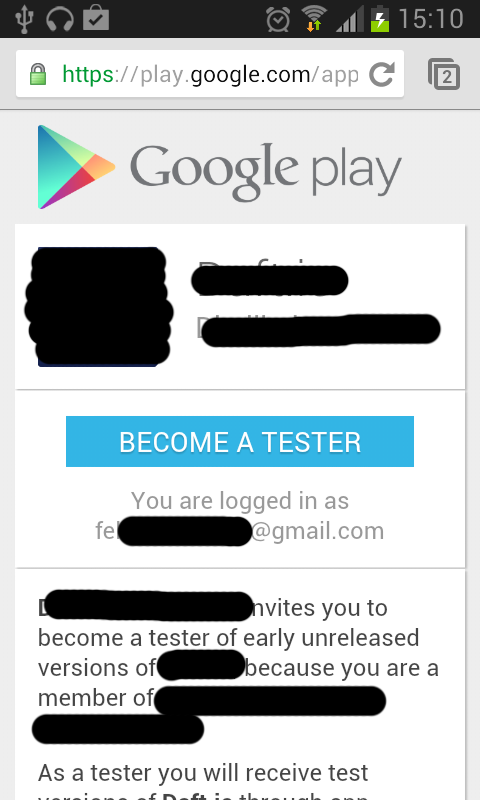 I'm having the same problem, the link simply doesn't work, 36 hours after publishing. Might as well not even provide the alpha/beta features if they cripple the developer's ability to move fast...

Anyway, I'm sharing some information provided to me by Google Support, hoping it'll be helpful:

2015 and the alpha/beta testing is, at best, 50% working. About 50% (23 of our 60+) beta tester never gain access to the app via the provided link. All the others have no trouble at all installing the beta app and receiving updates. No rhyme or reason. Single account on their device, some with gmail accounts, some with private email. It's a mixed bag of who gets access and who doesn't. In all cases, once they accept the invitation to join the group they have full access to the group. But they get a 404 when trying access the app. Not worth the trouble. Our fix is to give the testers access to to our private server and pass out the beta versions that way. Updates aren't automagic, but the testers can get the app hassle free

I had the same problem (404 error on tester's link), but the cause was different from the one shown in buckson18's answer: in my case the app was published, but the user didn't join the testers Google Group, although he received the invite. After the user joined the group, the page showed correctly.

Hope this can help someone...

I was also facing this issue. The problem was that Google group was not added. Another important thing to take care is that the account being used for developer console must be member of google group being added. I couldn't find this anywhere in the documentation.

I have been using Beta testings for a couple of years and its very unreliable. Sometimes it works, sometimes it doesn't. Now they have Open Beta Testing. I tried it today for the first time, and though I followed all the instructions, but it still doesn't show the app in the app store, unless I sign in, which makes it regular old style beta testing. Its much easier and hassle free to use HockeyApp to distribute app for testing.

After wasting hours with Goolge's Alpha and Beta versions, I always end up putting my app into production so that I could keep my testers. Its already hard to convince large number of people to do the testing, and then keep asking them to go through half working or not working procedures to download the app.

I solved it by go to https://play.google.com/apps/testing/[app package] on the device and then click that link and open it with google play

One thing that seems to have worked for us is to use the "opt-in URL" the Play Store developer console provides under "App releases" which should look like:

This DIFFERS than the URL you see if you're already approved as a tester and visit the app's page on the Play Store in a browser. Ours looks like this:

Not the answer you're looking for? Browse other questions tagged android google-play or ask your own question.

53
Google Play Alpha App BM-PPH-01 Error
37
How do I allow android app alpha/beta testers to download the app for free?
9
Google Play Beta: 'App not available for this account' message