What is the difference between cssSelector & Xpath and which is better with respect to performance for cross browser testing?

I am working with the Selenium WebDriver 2.25.0 on multilingual web application & mainly test the page content (For different languages like Arabic, English, Russian & so on).

For my application which is better according to performance & make sure that it should be support for all the browsers (i.e. IE 7,8,9, FF, Chrome etc).

Thanks in advance for your valueable suggestions.

CSS selectors perform far better than Xpath and it is well documented in Selenium community. Here are some reasons,

However there are some situations where, you need to use xpath, for example, searching for a parent element or searching element by its text (I wouldn't recommend the later).

You can read blog from Simon here . He also recommends CSS over Xpath.

If you are testing content then do not use selectors that are dependent on the content of the elements. That will be a maintenance nightmare for every locale. Try talking with developers and use techniques that they used to externalize the text in the application, like dictionaries or resource bundles etc. Here is my blog that explains it in detail.

Thanks to @parishodak, here is the link which provides the numbers proving that CSS performance is better

I’m going to hold the unpopular on SO selenium tag opinion that XPath is preferable to CSS in the longer run.

This long post has two sections - first I'll put a back-of-the-napkin proof the performance difference between the two is 0.1-0.3 milliseconds (yes; that's 100 microseconds), and then I'll share my opinion why XPath is more powerful.

Let's first tackle "the elephant in the room" – that xpath is slower than css.

With the current cpu power (read: anything x86 produced since 2013), even on browserstack/saucelabs/aws VMs, and the development of the browsers (read: all the popular ones in the last 5 years) that is hardly the case. The browser's engines have developed, the support of xpath is uniform, IE is out of the picture (hopefully for most of us). This comparison in the other answer is being cited all over the place, but it is very contextual – how many are running – or care about – automation against IE8?

If there is a difference, it is in a fraction of a millisecond.

Yet, most higher-level frameworks add at least 1ms of overhead over the raw selenium call anyways (wrappers, handlers, state storing etc); my personal weapon of choice – RobotFramework – adds at least 2ms, which I am more than happy to sacrifice for what it provides. A network roundtrip from an AWS us-east-1 to BrowserStack's hub is usually 11 milliseconds.

So with remote browsers if there is a difference between xpath and css, it is overshadowed by everything else, in orders of magnitude.

There are not that many public comparisons (I've really seen only the cited one), so – here's a rough single-case, dummy and simple one.
It will locate an element by the two strategies X times, and compare the average time for that.

The target – BrowserStack's landing page, and its "Sign Up" button; a screenshot of the html as writing this post: 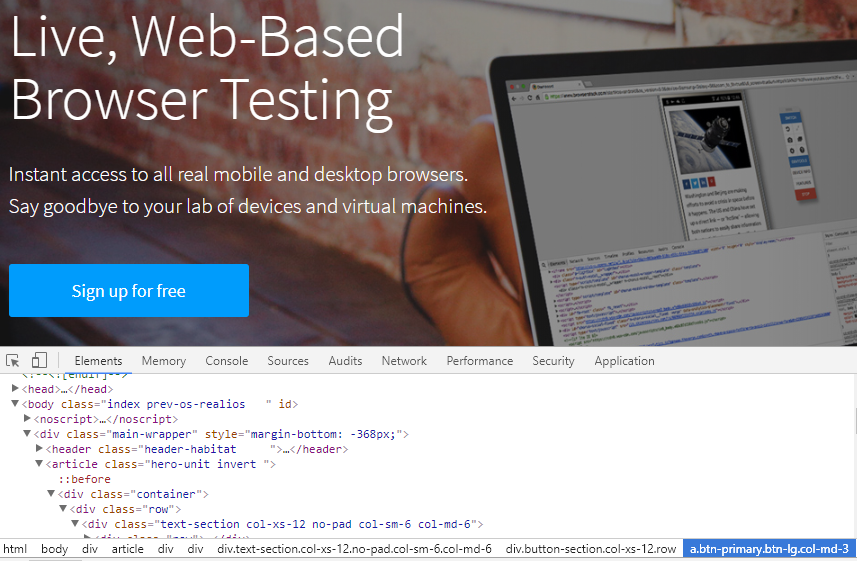 For those not familiar with Python – it opens the page, and finds the element – first with the css locator, then with the xpath; the find operation is repeated 1,000 times. The output is the total time in seconds for the 1,000 repetitions, and average time for one find in milliseconds.

Deliberately chosen not to be over-tuned; also, the class selector is cited for the css as "the second fastest after an id".

Obviously the per find timings are pretty close; the difference is 0.32 milliseconds. Don't jump "the xpath is faster" – sometimes it is, sometimes it's css.

Let's try with another set of locators, a tiny-bit more complicated – an attribute having a substring (common approach at least for me, going after an element's class when a part of it bears functional meaning):

The two locators are again semantically the same – "find a div element having in its class attribute this substring".
Here are the results:

As an exercise - the same test as done in the linked blog in the comments/other answer - the test page is public, and so is the testing code.

They are doing a couple of things in the code - clicking on a column to sort by it, then getting the values, and checking the UI sort is correct.
I'll cut it - just get the locators, after all - this is the root test, right?

The same code as above, with these changes in:

And here is the outcome:

The "Finding Elements By Traversing":

So 5 years later (better browsers engines) and focusing only on the locators performance (no actions like sorting in the UI, etc), the same testbed - there is practically no difference between CSS and XPath.

So, out of xpath and css, which of the two to choose for performance? The answer is simple – choose locating by id.

Long story short, if the id of an element is unique (as it's supposed to be according to the specs), its value plays an important role in the browser's internal representation of the DOM, and thus is usually the fastest.

Yet, unique and constant (e.g. not auto-generated) ids are not always available, which brings us to "why XPath if there's CSS?"

With the performance out of the picture, why do I think xpath is better? Simple – versatility, and power.

Xpath is a language developed for working with XML documents; as such, it allows for much more powerful constructs than css.
For example, navigation in every direction in the tree – find an element, then go to its grandparent and search for a child of it having certain properties.
It allows embedded boolean conditions – cond1 and not(cond2 or not(cond3 and cond4)); embedded selectors – "find a div having these children with these attributes, and then navigate according to it".
XPath allows searching based on a node's value (its text) – however frowned upon this practice is, it does come in handy especially in badly structured documents (no definite attributes to step on, like dynamic ids and classes - locate the element by its text content).

The stepping in css is definitely easier – one can start writing selectors in a matter of minutes; but after a couple of days of usage, the power and possibilities xpath has quickly overcomes css.
And purely subjective – a complex css is much harder to read than a complex xpath expression.

Finally, again very subjective - which one to chose?

IMO, there is no right or wrong choice - they are different solutions to the same problem, and whatever is more suitable for the job should be picked.

Being "a fan" of XPath I'm not shy to use in my projects a mix of both - heck, sometimes it is much faster to just throw a CSS one, if I know it will do the work just fine.

The debate between cssSelector vs XPath would remain as one of the most subjective debate in the Selenium Community. What we already know so far can be summarized as:

Dave Haeffner carried out a test on a page with two HTML data tables, one table is written without helpful attributes (ID and Class), and the other with them. I have analyzed the test procedure and the outcome of this experiment in details in the discussion Why should I ever use cssSelector selectors as opposed to XPath for automated testing?. While this experiment demonstrated that each Locator Strategy is reasonably equivalent across browsers, it didn't adequately paint the whole picture for us. Dave Haeffner in the other discussion Css Vs. X Path, Under a Microscope mentioned, in an an end-to-end test there were a lot of other variables at play Sauce startup, Browser start up, and latency to and from the application under test. The unfortunate takeaway from that experiment could be that one driver may be faster than the other (e.g. IE vs Firefox), when in fact, that's wasn't the case at all. To get a real taste of what the performance difference is between cssSelector and XPath, we needed to dig deeper. We did that by running everything from a local machine while using a performance benchmarking utility. We also focused on a specific Selenium action rather than the entire test run, and run things numerous times. I have analyzed the specific test procedure and the outcome of this experiment in details in the discussion cssSelector vs XPath for selenium. But the tests were still missing one aspect i.e. more browser coverage (e.g., Internet Explorer 9 and 10) and testing against a larger and deeper page.

Dave Haeffner in another discussion Css Vs. X Path, Under a Microscope (Part 2) mentions, in order to make sure the required benchmarks are covered in the best possible way we need to consider an example that demonstrates a large and deep page.

To demonstrate this detailed example, a Windows XP virtual machine was setup and Ruby (1.9.3) was installed. All the available browsers and their equivalent browser drivers for Selenium was also installed. For benchmarking, Ruby's standard lib benchmark was used.

NOTE: The output is in seconds, and the results are for the total run time of 100 executions. 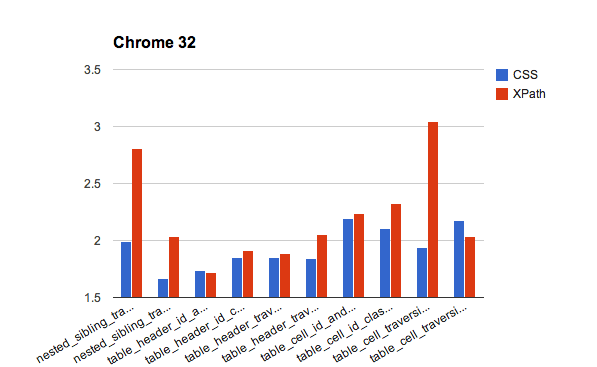 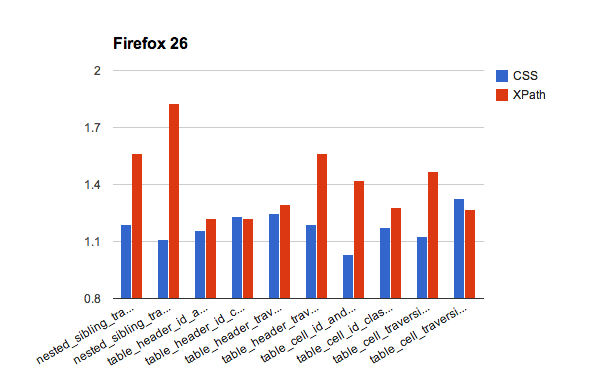 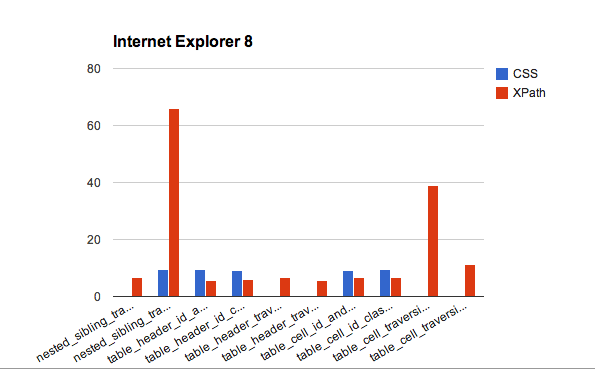 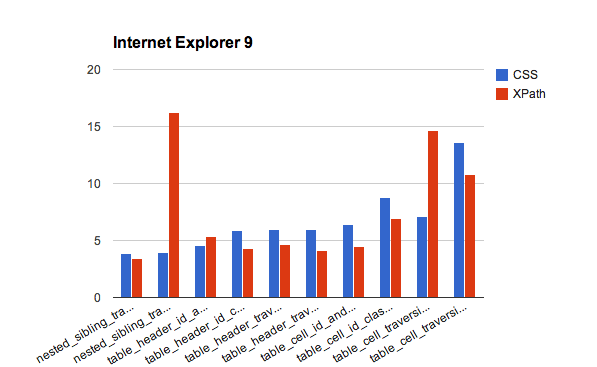 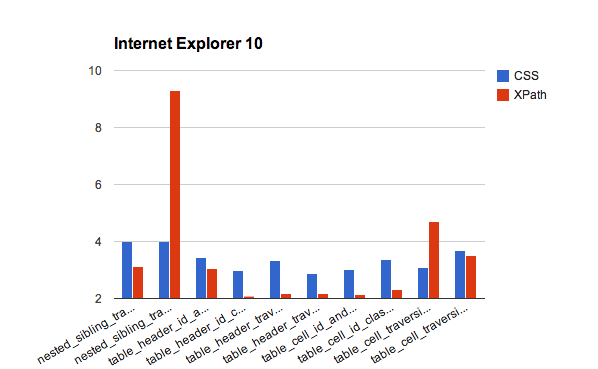 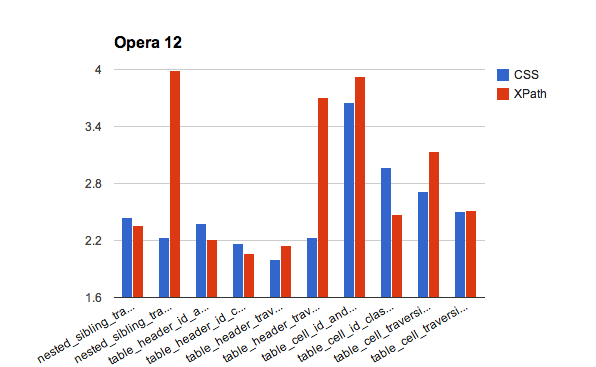 You can perform the bench-marking on your own, using this library where Dave Haeffner wrapped up all the code.

108
Checking if element exists with Python Selenium
28
Locating an element by id
50
Official locator strategies for the webdriver
8
Why should I ever use CSS selectors as opposed to XPath for automated testing?
5
cssSelector vs XPath for selenium
6
Is xpath different for different browser?
6
How to find a DOM element by its text content?
3
How to speed up python selenium find_elements?
2
What is the most efficient way to wait for a page element (xpath) to show up in Selenium Webdriver?
-2
html table row count using Selenium Webdriver (Java)
See more linked questions