How do I get the font name from an otf or ttf file?

I have used a custom font in my previous app.

The file name was "ProximaNova-Regular.otf" and to load the font I just used...

Now in this new app I have three font files...

But I'm not sure how to load these.

But this just falls back to using Helvetica.

How can I find what name to use?

Follow these four easy steps to add and use a new font in your iOS app:

"Full Name" is what you're looking for.

That's what worked for me with TTFs.

I just used a font that had a different name from the "Full Name" in Get Info.

For the compilation of this answer, If the quick check above doesn't work, run this code in your project:

And search for the correct name of the font you want to use. 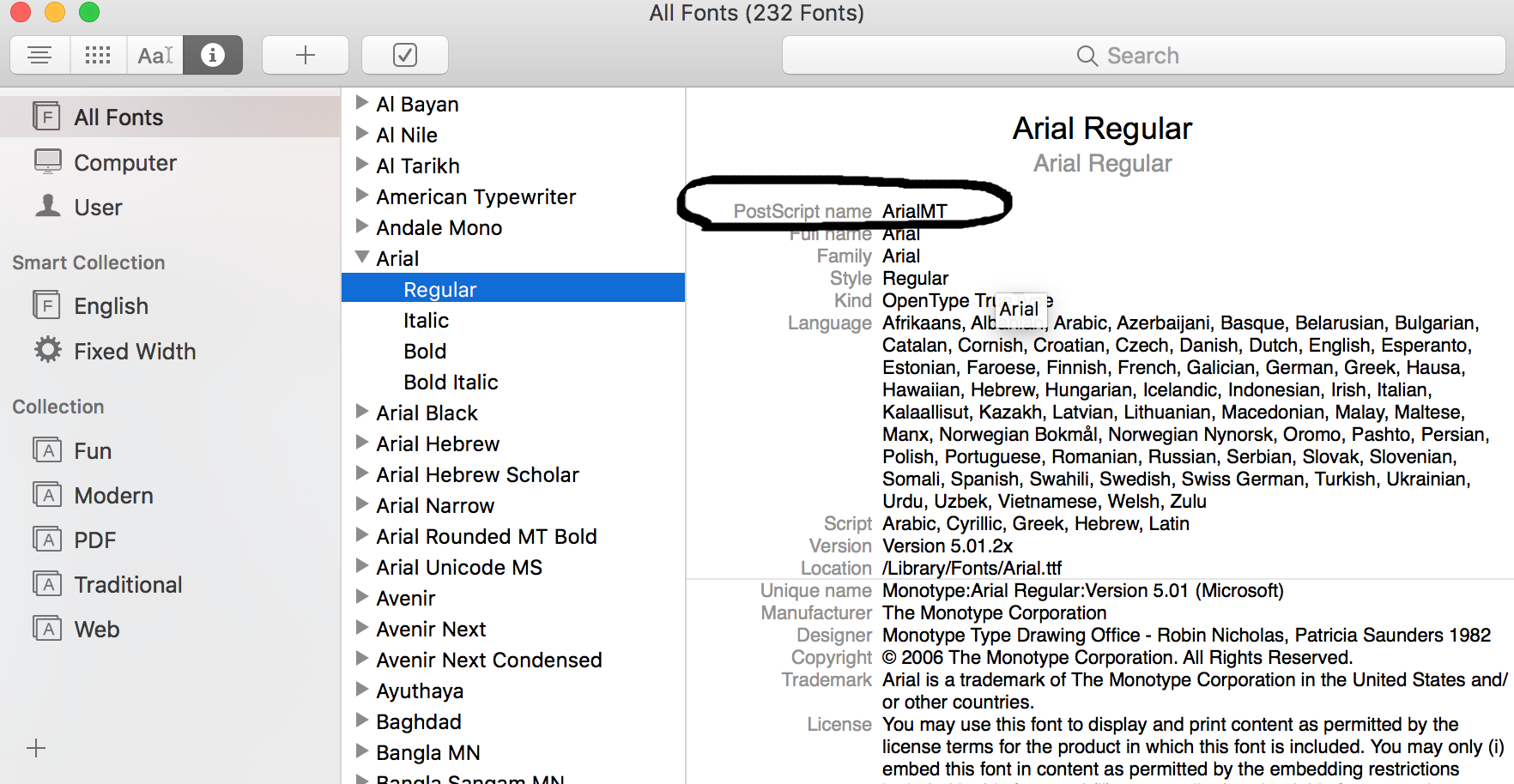 To use fonts in iOS, you have to load the font based on the font's FULL NAME (PostScript Name), which is sometimes (and usually is) different from the font's actual FILE NAME.

Imagine yourself renaming the Font file "Arial-regular.ttf" to be "foo.ttf". The font contained inside the font file you just renamed is still "Arial-regular".

There are some good programmatic ways to get the font name already on this thread, but I have a different approach using the command line.

If you are on a Mac or Linux, simply run this script from the command line in the directory where you have your custom fonts (uses the fc-scan utility from fontconfig which is probaly already installed, but if not you can install it via homebrew: brew install fontconfig):

Here is a screenshot of the above command running on my ~/Library/Fonts directory:

The script above will run through all the .ttf and .otf files in the current directory, then print out the PostScript Name for each font which you can use to reference the font file in XCode or elsewhere.

If you want to get fancy with some additional information (PostScriptName, Filename) and some color coding, you can run this alternative script:

This is a bit faster than copy-pasting code inside of your AppDelegate.m file to print out the names every time you want to add a new font file, which is the popular method, and it's also faster than opening the Font in FontBook to inspect the PostScript Name.

USEFUL TIP: If you alias the above script in your terminal so that all you need to do is type a single command to get all the PostScript font names for all the files in the current directory (my function is called fontnames so all I have to do is type fontnames at the terminal inside the directory with fonts in it, and the PostScript names will be printed automatically, then you will save time in your development workflow and have this handy script ready to use when you need it.

You want to know how to get name go for this :-

hope it helps you...

If you want to find the font name for a given font file programmatically:

Replace with your own throwable Error objects as required.

After you've added your fonts to your project/app, add this code (probably just in app delegate didFinishLaunchingWithOptions method) in order to print out all the available fonts for your app. From with-in that list you should be able to identify the font you're after. Don't forget to remove the unnecessary code after.

You can also use otfinfo --info arial.ttf to get the name from command line. The postscript name is the one you need to pass to the UIFont constructor.

Another "quick, practical" hack that doesn't involve scanning through all the default fonts that exist on either the emulator or device is to use the font for something in your storyboard. Then if you edit the storyboard with a text editor (open as source code), you can see the fonts used with "internal" names if you search for the "customFonts" tag:

List font names and families for macOS with Swift 4.1:

Not the answer you're looking for? Browse other questions tagged ios uifont or ask your own question.

1038
How to change the name of an iOS app?
1731
How can I make a UITextField move up when the keyboard is present - on starting to edit?
41
How do you change the color of a UIFont?
1421
Passing data between view controllers
40
Is there a medium weight font between -systemFontOfSize: and -boldSystemFontOfSize:?
4
Load TTF font from external path
56
Setting BOLD font on iOS UILabel
672
iOS 8 UITableView separator inset 0 not working