I just installed the ADO.NET connector from here http://dev.mysql.com/downloads/connector/net/

Yet MySQL doesn't appear as a data source like it should. I tried restarting Visual Studio. It doesn't fix my issue. Did I install the wrong connector? 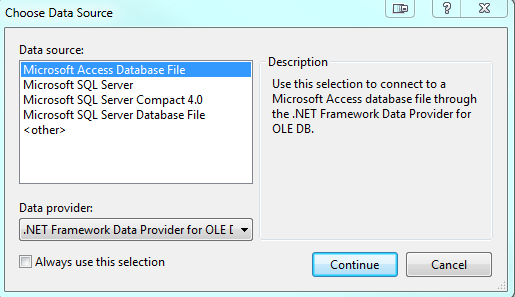 EDIT: STill nothing. I'm using Visual Studio Express For Desktop. Do I need to pay for the Ultimate edition to use a MySQL Data Source?

I was having the same problem just now. I solved it by uninstalling the latest Connector/NET drivers (6.7.4) and then installed the older drivers (6.6.5) and it works.

I am using Visual Studio 2010. I uninstalled the latest ones because I figured they were somehow related to .NET4.5, which I'm not able to use. 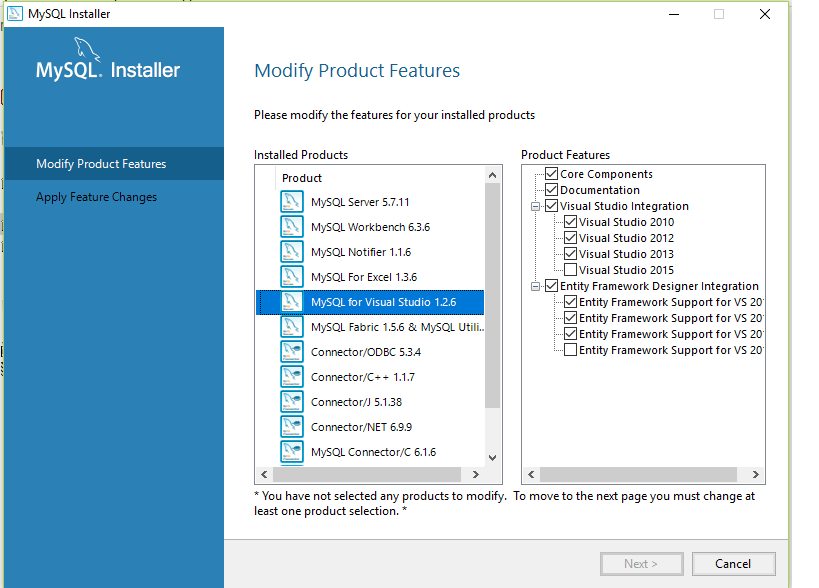 When I installed MySQL Community with the ConnectorNET and VisualStudio Plugin options included - MySQL didn't show up as a data provider in Visual Studio.

The installer I used included the VS Plugin version 1.2.9, which had supposedly fixed installation issues from 1.2.8, but still didn't work for me...

I found the solution here, Thanks to @LambertHeenan.

Stuzor and hexcodes solution worked for me as well. However, if you do want the latest connector you have to download another product. From the oracle website:

I found this on the MySQL support page for the Visual Studio connectors.

It appears that they do not support the MySQL to Visual Studio EXPRESS editions.

So to answer your question, yes you may need the ultimate version or professional edition - just not Express to be able to use MySQL with VS.

From the MySql site.

Tried everything but on Visual Studio 2015 Community edition I got it working when I installed MySQL for Visual Studio 1.2.4+ from http://dev.mysql.com/downloads/windows/visualstudio/ At time of writing I could download 1.2.6 which worked for me. 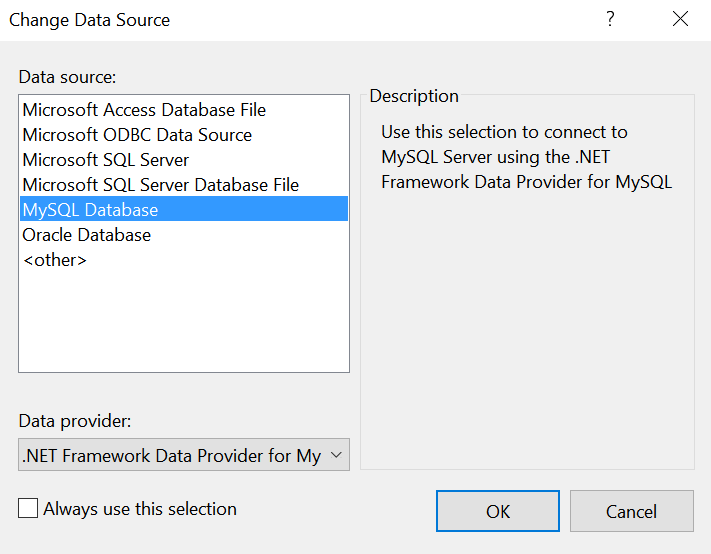 The Connector 6.7.x does not integrate the native data provider anymore. For "Visual Studio 2012" or less, you have to install "MySQL for Visual Studio". If you are using "Visual Studio 2013" there is no possibility to integrate MySQL for the "Entity Framework" yet. A solution should be available on 10/2013!

After installing add the dll files and restart the visual studio.

I tried to install to VS 2015 using the Web installer. It seemed to work, but there was still no MySQL entry for Data Connections. I ended up going to http://dev.mysql.com/downloads/windows/visualstudio/, using it to uninstall then re-install the connector. Not it works as expected.

I have faced the same problem and i have installed mysql-connector-net-8.0.11. But in visual studio is not showing the db connector for mysql. Then I was installed the mysql-for-visualstudio-1.2.8 and run the visual studio. Its working fine.

Just struggled with Visutal Studio 2017 Community Edition - none of above options worked for me. In my case what i had to do was:

Not the answer you're looking for? Browse other questions tagged mysql visual-studio-2012 ado.net or ask your own question.