Can I create a custom TestContext timer for UnitTest/LoadTest in Visual Studio?

A few of my UnitTests have a Sleep that is defined in a loop. I want to profile not only each iteration of the test, but the overall time for all iterations, in order to show any non linear scaling. For example, if I profile the "Overall", it includes the time for the sleep. I can use Stopwatch Start/Stop so that it only includes the doAction(). However, I can't write the Stopwatch results to the TestContext results.

It seems that TestContext can be inherited from and redefined. However, I do not see any examples for how to write this back to the transaction store.

Is there an implementation for this I can refer to, or another idea. I would like to see it in the same report that Visual Studio presents for the LoadTest. Otherwise I have to write my own reporting.

Also, I have tried sniffing the SQL that writes these to the LoadTest database, but was not successful in figuring out how. There should be a SPROC to call but I am thinking it is all of the data at the end of the test.

Well, I had a similar problem. I wanted to report some extra data/reports/counters from my tests in the final test result like Visual Studio does and I found a solution.

First, this cannot be done with the way you are trying. There is no direct link between the Load Test and the Unit Test where the TestContext exists.

Second, you have to understand how visual studio creates the reports. It collects data from the performance counters of the OS. You can edit these counters, remove those you don't want and add others you want.

How to edit the counters

The load test configuration has two basic sections regarding the counters. These are: 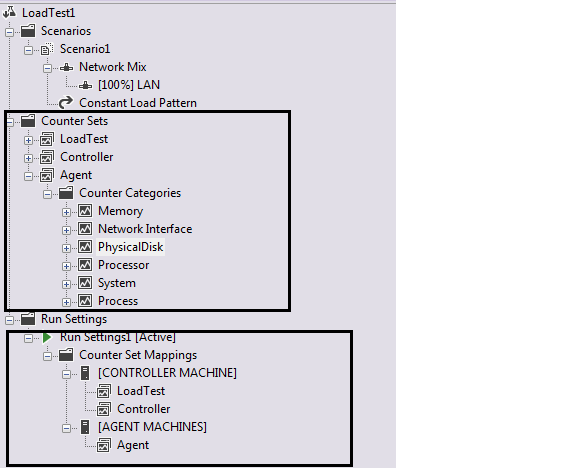 You can add more counters sets and more machines. By right clicking on the Counter Set Mappings --> Manage Counter Sets... a new window opens as below: 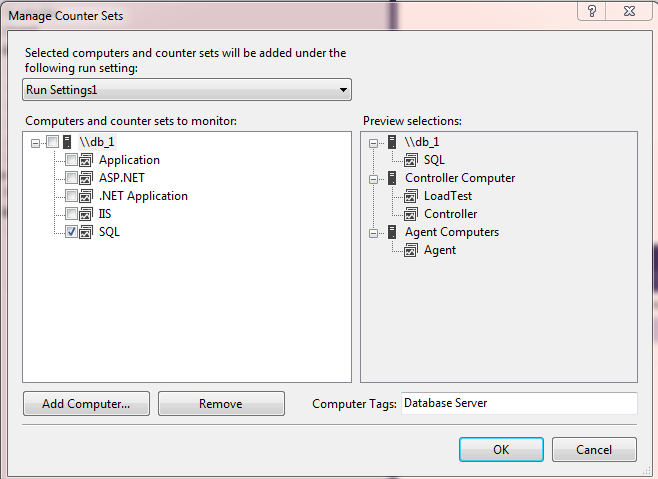 As you can see, I have added an extra machine with name db_1. This is the computer name of the machine and it must be at the same domain with the controller in order to have access to it and collect counters. I have also tagged it as database server and selected the sql counter set (default for sql counters but you can edit it and add any counter you want). Now every time this load test is executed, the controller will go to a machine with computer name db_1 and collect data which will be reported at the final test results.

Ok, after this (big) introduction it's time to see how to add your data into the final test results. In order to do this you must create your own custom performance counters. This means that a new Performance Counter Category must be created in the machines you need to collect these data. In your case, in all of your agents because this is where the UnitTests are executed.

After you have created the counters in the agents, you can edit the Agents counter set as shown above and select your extra custom counters.

Here is a sample code on how to do this.

First create the performance counters to all your agents. Run this code only once on every agent machine (or you can add it in a load test plugin):

And here the code of your test:

Now, when your tests are executed, they will report to the counter their data. At the end of the load test you will be able to see the counter in every agent machine and add it to the graphs. It will be reported with MIN, MAX and AVG values.

I do not know how you would add the value to the TestContext and hence have it saved via that mechanism. An alternative might be to simply write the timing results, as text, to the trace, debug or console output streams so it is saved in the log of the test run. To see these outputs the three Logging properties of the active Run Settings need to be considered. Their default only saves logs for the first 200 failed tests. Setting Save log frequency for completed tests to 1 should save the logs of all the tests until Maximum Test Logs is reached. The steps are shown in more detail in: http://blogs.msdn.com/b/billbar/archive/2009/06/09/vsts-2010-load-test-feature-saving-test-logs.aspx

One downside of this approach is that the log files can only be seen one at a time in Visual Studio, by clicking on the Test log links in the one of the results windows. I have been trying to find a way of extracting web test logs from the SQL database of test results, rather than having to click links for each log in Visual Studio. I believe that unit test logs are held in the same manner. I have described this problem and what I have managed so far in https://stackoverflow.com/questions/16914487/how-do-i-extract-test-logs-from-visual-studios-load-test-results

Update. I believe what is asked in the question cannot be provided with the APIs available directly within Visual Studio's load test environment. Data and Diagnostics Adapters can be written for Web Performance tests and probably also for unit tests. By using such an adapter code can record data from an application or test suite and have it recorded within the test results. There are several Microsoft blogs and MSDN pages about writing Data And Diagnostic Adapters.

The easiest way is the OP's original approach, there just seem to be some gotchas that I ran into and others seem to as well. One is that for some reason TestContext.BeginTimer(string); does not always exist, see this for evidence, but seemingly no solution. But there is another issue of incorrectly creating and using the property.

If you put a break point on the setter you will see that after Class Initialize but before TestInitialize the 'TestContext setter' gets called and a value is assigned from UnitTestExecuter.SetTestContext(). Now the test stays exactly as you were trying to do it

Here is what my output looks like with my timers Cache, Create-, Login 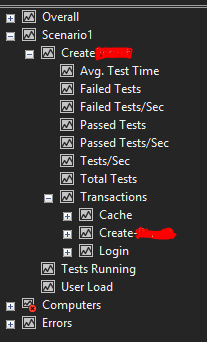 All of which can then be viewed on the graph.

In the OP's example if you ran a load test with 10 users each running the test 1 time and DoWork took 0 seconds you would see:

Which I think is the intended result.

These issues took me a few hours to figure out and after some testing to exactly pinpoint and verify, but in the end this seems to be the easiest and best solution.

On a side note this is the correct implementation of TestContext to make Data Driven Testing work properly as each test can get its correct data from the context.

Not the answer you're looking for? Browse other questions tagged c# visual-studio unit-testing load-testing test-framework or ask your own question.