Difference between HBase and Hadoop/HDFS

This is kind of naive question but I am new to NoSQL paradigm and don't know much about it. So if somebody can help me clearly understand difference between the HBase and Hadoop or if give some pointers which might help me understand the difference.

Till now, I did some research and acc. to my understanding Hadoop provides framework to work with raw chunk of data(files) in HDFS and HBase is database engine above Hadoop, which basically works with structured data instead of raw data chunk. Hbase provides a logical layer over HDFS just as SQL does. Is it correct?

Hadoop is basically 3 things, a FS (Hadoop Distributed File System), a computation framework (MapReduce) and a management bridge (Yet Another Resource Negotiator). HDFS allows you store huge amounts of data in a distributed (provides faster read/write access) and redundant (provides better availability) manner. And MapReduce allows you to process this huge data in a distributed and parallel manner. But MapReduce is not limited to just HDFS. Being a FS, HDFS lacks the random read/write capability. It is good for sequential data access. And this is where HBase comes into picture. It is a NoSQL database that runs on top your Hadoop cluster and provides you random real-time read/write access to your data.

You can store both structured and unstructured data in Hadoop, and HBase as well. Both of them provide you multiple mechanisms to access the data, like the shell and other APIs. And, HBase stores data as key/value pairs in a columnar fashion while HDFS stores data as flat files. Some of the salient features of both the systems are :

Hadoop is most suited for offline batch-processing kinda stuff while HBase is used when you have real-time needs.

An analogous comparison would be between MySQL and Ext4.

When to use HBase:

But HBase has some limitations

Have a look at Do's and Don't of HBase from cloudera blog.

Hadoop uses distributed file system i.e HDFS for storing bigdata.But there are certain Limitations of HDFS and Inorder to overcome these limitations, NoSQL databases such as HBase,Cassandra and Mongodb came into existence.

Hadoop can perform only batch processing, and data will be accessed only in a sequential manner. That means one has to search the entire dataset even for the simplest of jobs.A huge dataset when processed results in another huge data set, which should also be processed sequentially. At this point, a new solution is needed to access any point of data in a single unit of time (random access).

Like all other FileSystems, HDFS provides us storage, but in a fault tolerant manner with high throughput and lower risk of data loss(because of the replication).But, being a File System , HDFS lacks random read and write access. This is where HBase comes into picture. It’s a distributed, scalable, big data store, modelled after Google’s BigTable. Cassandra is somewhat similar to hbase.

Both HBase and HDFS in one picture 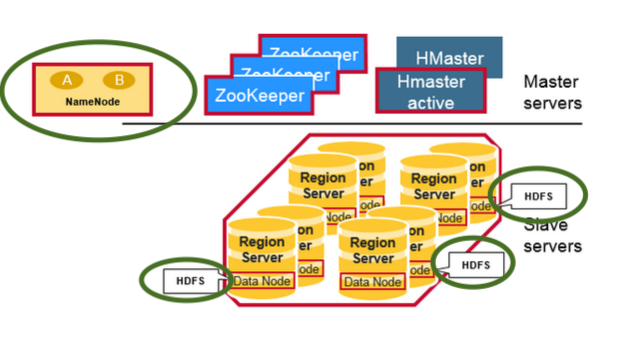 HDFS is a distributed file system that is well suited for the storage of large files. which does not provide fast individual record lookups in files.

HBase, on the other hand, is built on top of HDFS and provides fast record lookups (and updates) for large tables. This can sometimes be a point of conceptual confusion. HBase internally puts your data in indexed "StoreFiles" that exist on HDFS for high-speed lookups.

Well, At the infrastructure level, each salve machine in the cluster have following demons 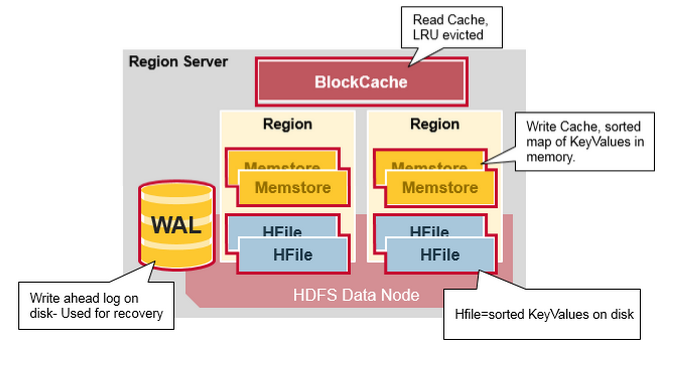 How is it fast with lookups? 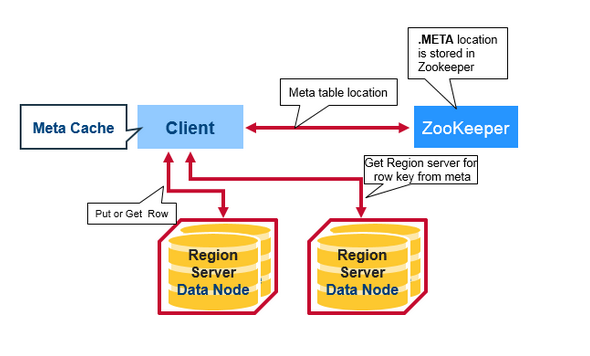 What is the meta table in the above picture?

After all the information, HBase read flow is for lookup touches these entities

Hadoop is a general name for several subsystems: 1) HDFS. A distributed file system that distributes data across a cluster of machines taking care of redundancy etc 2) Map Reduce. A job management system on top of HDFS - to manage map-reduce (and other types) jobs processing the data stored on HDFS.

Basically it means its an offline system - you store data on HDFS and you can process it by running jobs.

HBase on the other hand in a column based database. It uses HDFS as storage - which takes care of backup\redundency\etc but its an "online store" - meaning you can query it for specific row\rows etc and get an immediate value.

HDFS is a Java based distributed file system that allows you to store large data across multiple nodes in a Hadoop cluster. Whereas HBase is a NoSQL database (similar as NTFS and MySQL).

As Both HDFS and HBase stores all kind of data such as structured, semi-structured and unstructured in a distributed environment.

HDFS stores large data sets in a distributed environment and leverages batch processing on that data.

While HBase stores data in a column oriented manner where each column is stored together so that, reading becomes faster leveraging real time processing.

Not the answer you're looking for? Browse other questions tagged hadoop nosql hbase hdfs difference or ask your own question.

18
What is meant by “HDFS lacks random read and write access”?
5
Relationship between HDFS, HBase, Pig, Hive and Azkaban?
1
HDFS vs HBASE: Which one performs better on millions of small text files?
0
Difference between hdfs and hbase
0
Using hadoop to scale out a calculation: how to proper design
0
Confusion in Apache Nutch, HBase, Hadoop, Solr, Gora

2
Please clarify my understanding of Hadoop/HBase
5
What to use.. Impala on HDFS, or Impala on Hbase or just the Hbase?
751
Differences between Oracle JDK and OpenJDK
0
Hadoop vs. NoSQL-Databases
0
Difference between hdfs and hbase
0
Confusion in Apache Nutch, HBase, Hadoop, Solr, Gora
1
Solr HBase search engine
1
Hadoop and HBase integration