How do I turn off a static code analysis warning on a line by line warning in CDT (C code)?

We have a project using CDT in Eclipse. It's an old project that we just imported into Eclipse, and I want to ensure we start using static code analysis to find any weirdnesses.

The thing is, there are a bunch of lines that trigger warnings that we want to just ignore, with the main ones being fallthroughs within switch statements.

I know how to do this for lint, but what about for CDT? Is there a single-line comment that I can put right above the line?

Example: ("No break at the end of case")

before the next case.

These settings are located under Window -> Preferences -> C/C++ -> Code Analysis. You can customize the settings. For example if you pick No break at the end of case, you can define the comment that suppresses the warning. By default it's "no break". So coincidentally copy/pasting the warning message into the comment worked in your case: 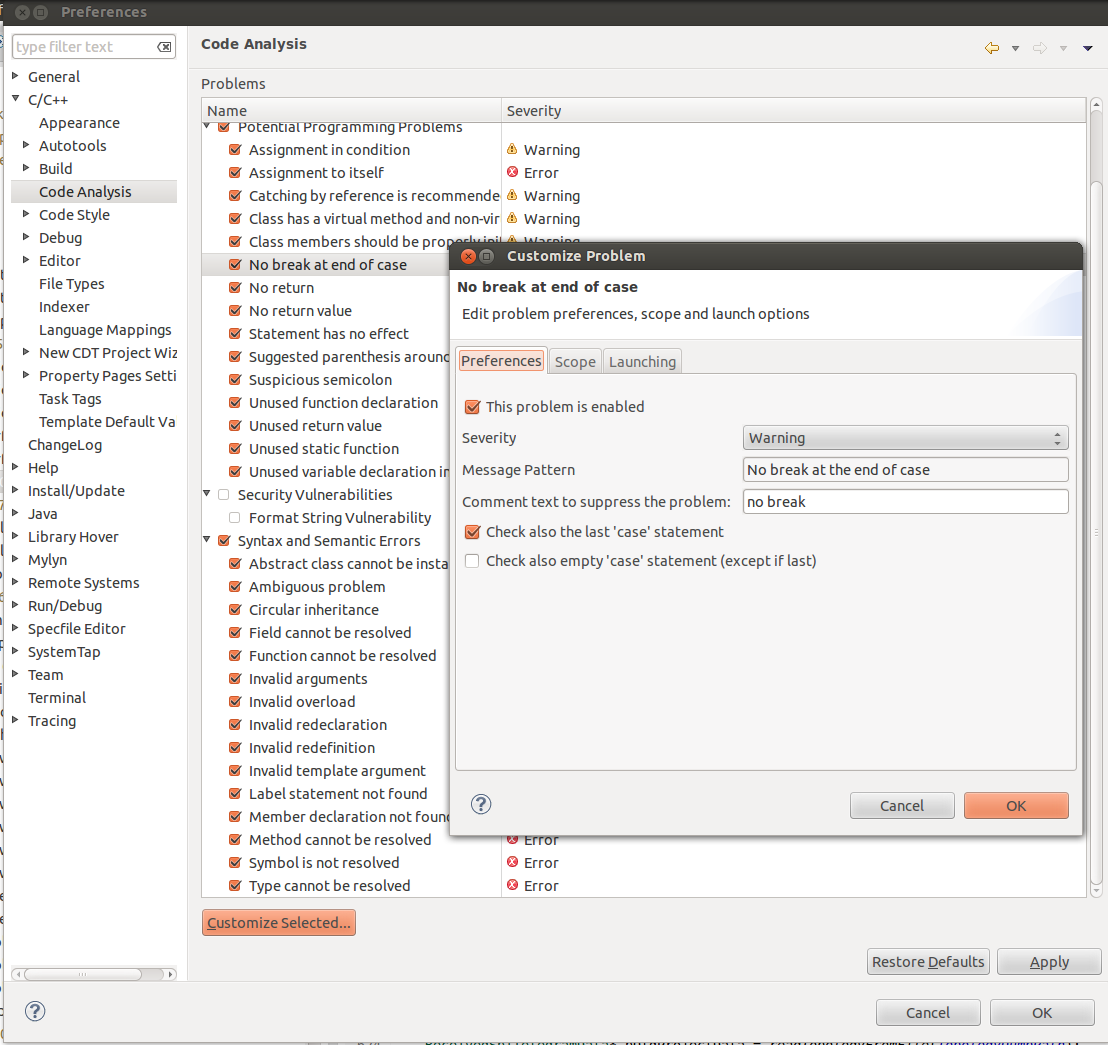 As you can see the text doesn't have to be an exact match and it doesn't seem to be case sensitive either.

Referring to your follow-up question about unused variables: When you customize Unused variable in file scope you can define variable names that should be ignored: 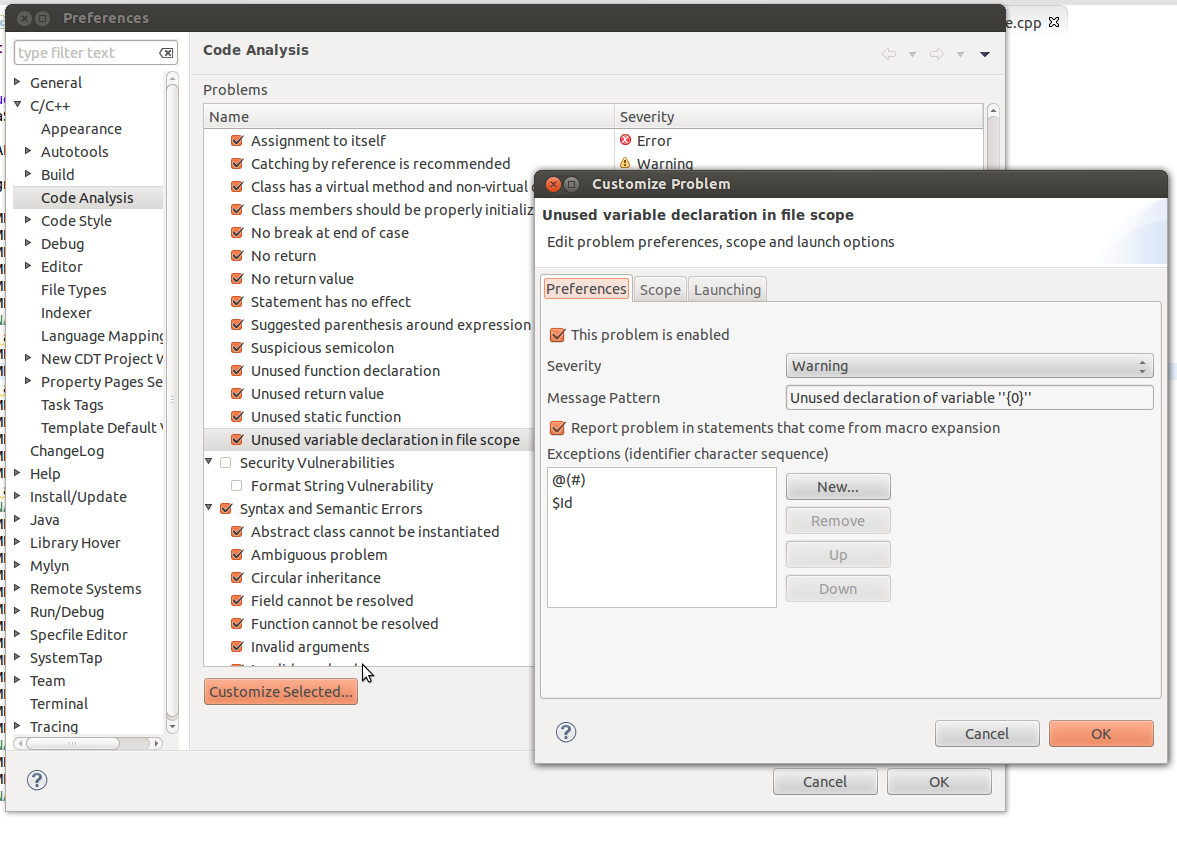 There are two cryptic predefined exceptions "@(#)" and "$Id". Unfortunately I couldn't find any official documentation so I went looking into the source. It looks like the checker simply tests if a variable name contains() any of the specified exceptions. If it does, the warning is suppressed.

Outside of Eclipse CDT, there's the popular void-casting trick. If the compiler warns about an unused variable, cast it to void. This operation has no effect, so it's safe, but from the perspective of the compiler that variable is now used. I usually wrap it in a macro to make abundantly clear what I'm doing, e.g.

I just added the text from the warning that I wanted to ignore to immediately above where the break would be.

As is has been said, in this specific case, it can be solved adding the comment:

What really matters is the (no break).

But also, it is required that you don't have more comments between the end of this case and the next one or it won't work. For example the next case will still result in a warning:

You have to upgrade to Eclipse Oxygen.3 (or.2).

Beginning with these versions warnings/markers can be suppressed by simply using "Quick Fix".

I have encountered this question,and I just want to eliminate them. I tried to add /* no break */,you should make sure it is added before the next "case". This is the question I have encountered 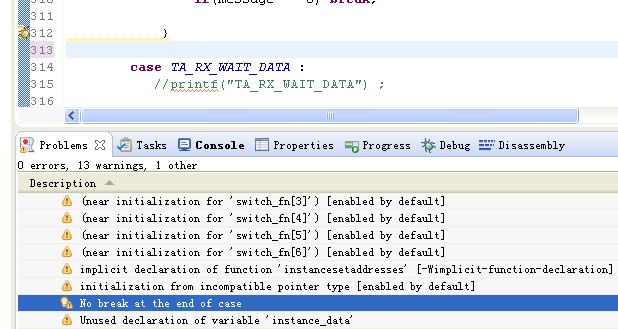 This is the solution I use：

To disable the annoying notifications, you need to go to Preferences->C/C++->Editor, and then uncheck the options that say "Highlight inactive code", "Display problems as you type", etc. Hope this helps.

Not the answer you're looking for? Browse other questions tagged c eclipse eclipse-cdt or ask your own question.

3
How to disable warning “No break at the end of case” in Eclipse?

739
How can I show line numbers in Eclipse?
482
How to turn off the Eclipse code formatter for certain sections of Java code?
211
How to disable GCC warnings for a few lines of code
210
How to enable C++11/C++0x support in Eclipse CDT?
15
Including source files from another C++ project in Eclipse CDT
6
#include inside function body doesn't work (CDT/Eclipse C++)
0
How sparse and coverity tool for static code analysis are different?
1
Usage example to generate and use ASTs using Eclipse CDT in a stand alone application