In 2007, the days that we switch to daylight savings time changed. Any date that falls within the extend range of DST prior to that change is reporting an incorrect timezone offset in Chrome and Firefox. It's like Firefox and Chrome don't pay attention to the fact that DST used to have different days.

If you run the following script it will report an offset of 240 minutes. That's incorrect, it should report 300 minutes. IE10 does this correctly. Does anyone know of a fix?

Here's an interesting piece of code I just hacked together (see below). It's really surprising how far off most of the dates are in every browser but IE. Compare the begin and end dates to this: http://www.timeanddate.com/worldclock/timezone.html?n=77&syear=2000

I ended up just replacing Date's prototype for getTimezoneOffset with my own that calculates it based on a hard-coded table. That works for us because we only do business in the U.S. It's about the worst possible solution I can imagine though...

It's actually specified behavior to use the current DST rules, and to ignore the ones in place at the particular date/time being examined. See ES5 15.9.1.8:

The rules are: apply the current DST rules, to whatever time was specified. This results in arrant nonsense behavior, but it's what ECMAScript requires.

It's possible -- likely, even -- that this behavior will change in a future version of ECMAScript, to require actual DST rules at all points in time be used. This wasn't required initially because of the burden of shipping tzdata that it imposes on implementers. The language has become important enough, however, that probably everyone will just have to suck it up in the long run. But the change could be years away for all I know, so don't hold your breath on it.

I have confirmed that this is a true bug in JavaScript.

This is pretty troubling. Does anyone know the root cause?

I thought it might be a WebKit bug, but Firefox uses Gecko.

I checked various issue lists and couldn't find this particular problem anywhere. Perhaps I missed something. I'm not sure where to file a bug report, since it affects multiple places.

Perhaps it is a core JavaScript bug? I really find it hard to believe that something this basic has been overlooked by a unit test.

I thought perhaps it was just affecting Windows systems, due to the OS having Windows timezones instead of TZDB, but that doesn't appear to be the case since it happens on Mac as well.

We all know JavaScript dates are screwy, but I thought we could at least depend on this. You don't even have to look at the offset, or involve parsing. Just check the value of:

In 2004 in the United States, daylight saving time ended on October 31 at at 2:00 AM, when the clocks rolled back to 1:00 AM. So by Nov 4th, they should certainly all be on standard time, but they're not! For example, in Chrome dev tools on the console, with clock set to US Eastern time zone:

It's putting the transition date on Nov 7th. That's the following the "First Sunday in November" rule that is presently in effect, but in 2004 the rule should have been the old one of "Last Sunday in October".

It does not appear limited to the browser. It also fails in Node.js

And just to prove that IE is fine, here is the output from IE10: 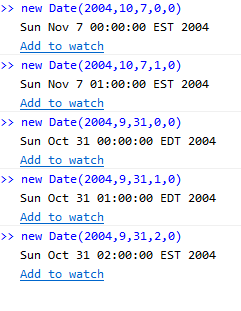 Interesting that IE and Firefox resolve the 1:00 ambiguity as Daylight Time while Chrome resolves it as Standard Time, but that is a separate issue. It does pick the correct transition date.

It's worth mentioning that in the latest Firefox 21, this issue does happen, but it presents itself differently because it's compounded by another issue that switches daylight for standard names, even though the correct offset is used. In otherwords, on Firefox, the output is like this: 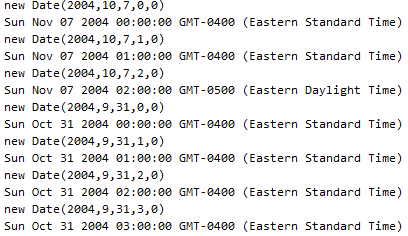 Not the answer you're looking for? Browse other questions tagged javascript node.js google-chrome firefox timezone or ask your own question.

8
Get Daylight Saving Transition Dates For Time Zones in C
865
Getting the client's time zone (and offset) in JavaScript
90
How to use TimeZoneInfo to get local time during Daylight Saving Time?
0
Date Time zone issue with daylight saving
646
How can I wait In Node.js (JavaScript)? l need to pause for a period of time
516
How to initialize a JavaScript Date to a particular time zone
60
PostgreSQL wrong converting from timestamp without time zone to timestamp with time zone
0
Java time ignores daylight saving rules
0
Chrome shows wrong time zone