I am looking for suggestions for a git integration with VS 2010/2012 that allow developers use the basic operations (commit, push,pull,switch branches, tagging)

I like deep integration with VS 2012 especially switch between branch seamlessly, you will work with any branch at any time.

Another thing is that it's working very well with Bitbucket.

1 and 2 gives you deep integration with the source control UI of Visual Studio, like padlock icons on files:

1 uses the ordinary Pending Changes tab, but adds some functions, like Switch Branch:

2 surely represents the future of Git integration in Visual Studio since Microsoft is behind it. 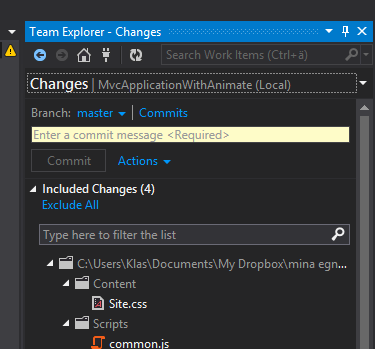 However, it sounds like you might prefer 3. Git Extensions is simpler and just gives you a simple toolbar with commit, pull, push, stash (not switch branch, though):

4
Is there VS analogue for vim's powerline?