Does any one know how to remove a project from Android Studio in an attempt to re- export it from Eclipse?

So far I have tried removing all the gradle files associated with the project, which causes an error when Android Studio tries to open my project.

These files were not located in AndriodStudioProjects Folder because I only imported the project it was not moved....

Basically what I would like to accomplish is, removing the file from the list of recent projects in Android Studio, re-export it from Eclipse and then import a working project back into Android Studio.

move your mouse cursor on the project and press Delete keyboard button :)

EDIT try this solution, works for me

This is for Android Studio 1.0.2(Windows7). Right click on the project on project bar and delete. 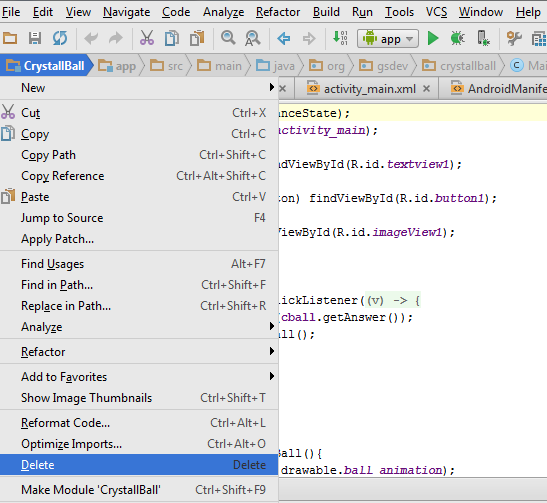 Then remove the project folder from within your user folder under 'AndroidStudioProject' using Windows explorer.

Close the studio and relaunch you will presented with welcome screen. Click on deleted project from left side pane then select the option to remove from the list. Done! 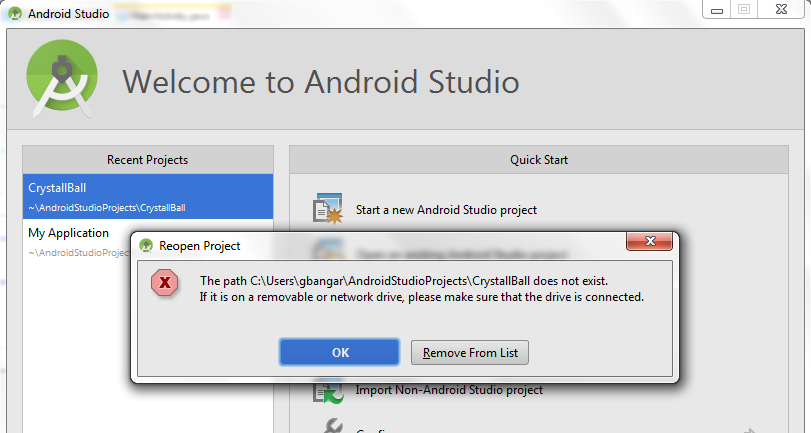 In the "Welcome to Android Studio" opening dialog you can highlight the app you want to remove from Android Studio and hit delete on your keyboard.

You must close the project, hover over the project in the welcome screen, then press the delete button.

The project can be removed from the "recent project" list but it will still remain in the project directory. To remove from the project list:

To completely remove the project:

Found this elsewhere on the web, it deletes basically everything (except the workspace.xml file, which you can delete manually from the project folder). 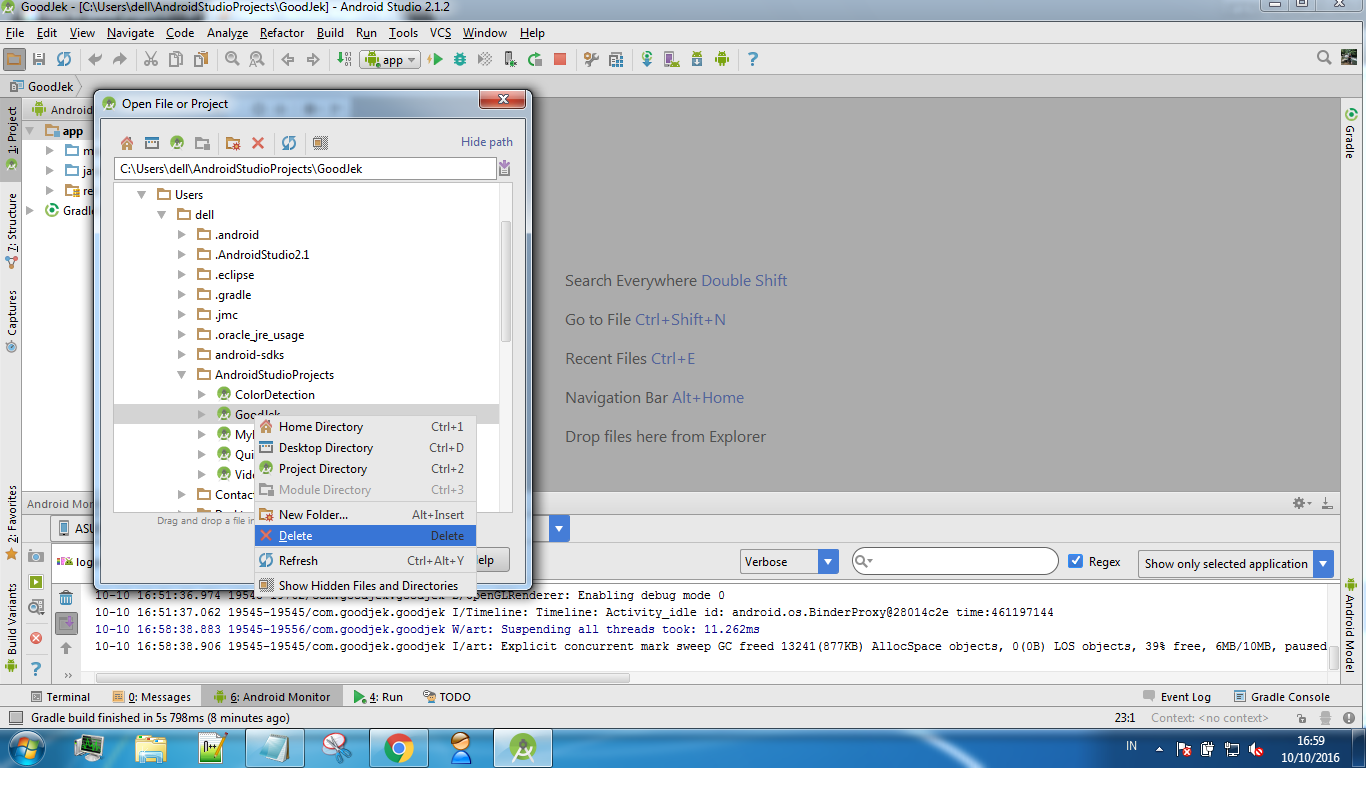 Easiest way to do this is close the project. Using file explorer head to the location of that project and delete.

Alot of processes, even simply deleting can be annoying to figure out in studio. Most deleting options a good work around is to delete using file explorer. This is a part of the process tht works for deleting modules as well. Which u will prob find is painful as well

Or if you don't want to build it just remove it from settings.gradle file

I had to remove my project from eclipse entirely. To do so I copied the folder of my project in workspace and pasted it onto my desktop. Then navigated back into eclipse right clicked selected delete and then check the box to delete the project from my workspace.

After this I closed eclipse. Opened Android studio and tried to open my imported project. At this point it told me the project didn't exist and provided me with an option to remove it from the list. After clicking this i closed Android Studio, and when i reopened it the project was gone.

Finally, I reopened eclipse and imported my project from existing sources to get it back inside eclipse.

I would advise against using Android Studio on projects that you have that already work fine with eclipse. Android studio is cool when you are creating new projects but from my experience there are a lot of problems with build paths when I import a build.gradle from eclipse to Android Studio. Android Studio is great but remember it is still in the I/O pre-release!!!

If you are trying to delete/cut as suggested by @Pacific P. Regmi and if you are getting "Folder in use" which won't let you to delete/cut make sure to close all the android studio instances.

The location of SDK is incorrect, the name of one filer is with place this is creating an issue. By removing that space issue will be resolved. old SDK location:

If it's Windows, all you need to do is delete the root of that project within the file explorer. Just right click on the name of the app in Android Studio, and then "show in file explorer". Then just delete the project folder all in all.

Not the answer you're looking for? Browse other questions tagged android import export android-studio or ask your own question.

4201
How to close/hide the Android soft keyboard programmatically?
3093
How to stop EditText from gaining focus when an activity starts in Android?
3907
Proper use cases for Android UserManager.isUserAGoat()?
1065
Android Studio: Add jar as library?
1366
What should be in my .gitignore for an Android Studio project?
1654
Rename package in Android Studio
756
"cannot resolve symbol R" in Android Studio
517
Error type 3 Error: Activity class {} does not exist