How do I convert a IPython Notebook into a Python file via commandline?

I'm looking at using the *.ipynb files as the source of truth and programmatically 'compiling' them into .py files for scheduled jobs/tasks.

The only way I understand to do this is via the GUI. Is there a way to do it via command line?

On the command line, you can use nbconvert:

As a bit of a hack, you can even call the above command in an IPython notebook by pre-pending ! (used for any command line argument). Inside a notebook:

Before --to script was added, the option was --to python or --to=python, but it was renamed in the move toward a language-agnostic notebook system.

If you want to convert all *.ipynb files from current directory to python script, you can run the command like this:

Here is a quick and dirty way to extract the code from V3 or V4 ipynb without using ipython. It does not check cell types, etc.

Following the previous example but with the new nbformat lib version :

Jupytext is nice to have in your toolchain for such conversions. It allows not only conversion from a notebook to a script, but you can go back again from the script to notebook as well. And even have that notebook produced in executed form.

You can do this from the IPython API.

I understand this is an old thread. I have faced the same issue and wanted to convert the .pynb file to .py file via command line.

My search took me to ipynb-py-convert

By following below steps I was able to get .py file

Above command will create a python script with the name "YourFileName.py" and as per our example it will create getting-started-with-kaggle-titanic-problem.py file

For converting all *.ipynb format files in current directory to python scripts recursively:

The following example turns an Iron Python Notebook called a_notebook.ipynb into a python script called a_python_script.py leaving out the cells tagged with the keyword remove, which I add manually to the cells that I don't want to end up in the script, leaving out visualizations and other steps that once I am done with the notebook I don't need to be executed by the script.

There's a very nice package called nb_dev which is designed for authoring Python packages in Jupyter Notebooks. Like nbconvert, it can turn a notebook into a .py file, but it is more flexible and powerful because it has a lot of nice additional authoring features to help you develop tests, documentation, and register packages on PyPI. It was developed by the fast.ai folks.

It has a bit of a learning curve, but the documentation is good and it is not difficult overall.

On my mint [ubuntu] system at work, even though jupyter was already installed and notebooks worked, jupyter nbconvert --to script gave the error no file/directory until I did a separate

Then all was fine with the conversion. I just wanted to add this in case anyone hits the same error (for me it was confusing as I thought the no file error referred to the notebook, which was definitely there in the local directory, took me a while to realize the subcommand was not installed).

I found that there are 2 ways to convert Jupyter Notebook to plain Python script with command line. Below is the example Jupyter notebook and output from both tools. 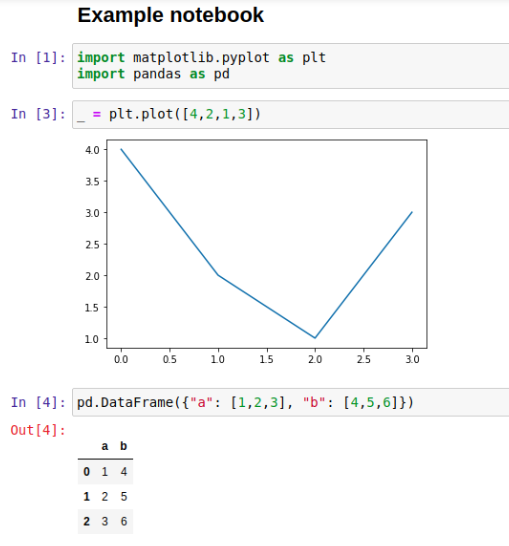 The nbconvert is tool that is used in Jupyter Notebook User Interface in Download as functionality. It can be used as command line tool: 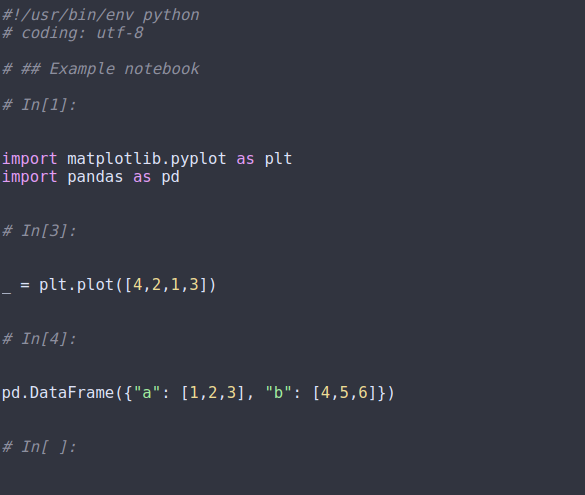 The jupytext is a package to keep .ipynb file synchronized with .py file. It can be also used to convert .ipynb files in command line. It supports several types of conversion: 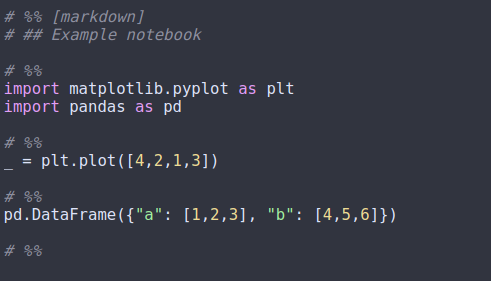 Here is a jq solution that could be situationally useful. Remember, notebooks are just json.

The given solution works only for converting a single .py file. Here is a solution that converts all .py files in a directory and sub-directories.

First, you need to install the tool that convert only one file at a time like ipynb-py-convert

Then cd into the place of your folder having the .py files and directories. Then we run the tool recursively on all files in the directory and subdirectories:

Now if you would like to convert the otherway around from .ipynb to .py also with batch convert, you can run:

This helped me a lot while exploring .py files. I make a copy of the project, run this code and quickly in Jupiter test different parts of the code as cells and so on. I hope it helps more people.

I have built a function to achieve this. The user does not have to install anything to use it.

I had this problem and tried to find the solution online. Though I found some solutions, they still have some problems, e.g., the annoying Untitled.txt auto-creation when you start a new notebook from the dashboard.

So eventually I wrote my own solution:

To use this script, you can add it to ~/.jupyter/jupyter_notebook_config.py :)

Note that you may need to restart the jupyter notebook / lab for it to work.

The %notebook foo.ipynb magic command will export the current IPython to "foo.ipynb".

0
New to Python, I wrote my script in Jupyter, however it doesn't seem to work in pycharm?
110
Convert JSON IPython notebook (.ipynb) to .py file
14
Type-check Jupyter Notebooks with mypy
4
Best way to convert .ipynb to .py in VSCode
6
Automatically convert jupyter notebook to .py
4
Convert jupyter lab notebook to script without added comments and new lines between cells
3
How to work with .ipynb files without launching the Jupyter Notebook server?
4
I am looking for a simple way to extract python code from a notebook on kaggle?
2
JuliaPro: import Jupiter notebook
0
Converting functions in Jupyter notebook (ipynb) files to individual .py files
See more linked questions