In java, what is a good way to design around a subclass that reduces the functionality of the superclass?

For example, consider the class "Man", that has the function "See" and the subclass "BlindMan" that shouldn't have that function, but should have everything else that "Man" has.

The only solution I can come up with is having an abstract class "Man", and two subclasses "SeeingMan" and "BlindMan", with SeeinMan adding a function "See".

However the problem with this solution is that if I now want to add a "DeafMan" class - what does it extend? SeeingMan? and what if that man is both deaf and blind?

I think you should use Composition rather than inheritance in this case, or have various subclasses that make up the human.

While I do understand your logic, a BaseClass is a contract, that guarantees all classes of that type should adhere to this behavior, having a subclass that removes the parent method is a big NO NO..

While you could throw various exceptions, I wouldn't go down that path at all. Think about it this way, say I am a developer who only needs to access Human object, I expect a certain behavior, and all of a sudden I call an interface method and get..an Exception just because I called it?? You should not be aware of the derived classes implementations and when you can or cano't call them.

Here are a few solutions:

Make Human a composition of BasicHumanFunctions, VisionSystem, etc. Then blind man would have only a few of those.

Make Human base class contain only the same behaviour all humans would like breathing etc, and then create a HealthyHuman and a BlindHuman etc, each creating their own methods. You can then use HealthHuman and subclass that further if you need.

For the second case you can still use composition too to share behaviour:

The most important principle, is Lyskov's substitution principle.

Once you get it and apply it, you can build your model however you want.

For example, you could say that a blind man still sees, only he only gets black (or grey) pictures. There's also the question of legally blind people you want still see something if a blurred or partial picture.

You could also say that the action the object can do is not see. What we do is to watch. Seeing is the (successful) result of watching. Even with working eyes, you may watch without seeing anything! And blind people can still "see" something without eyes, or with non-functioning eyes, by listening (thus hearing, and building a mental "picture").

So, forget about "see" and "hear". Use watch and listen. And expect nothing from that. (wide pre-conditions).

Define interface for CommonMan which has common properties and use individual interfaces For seperate subClasses which have their specific methods.Then you can get the Both the interface methods.

Dory has it right about favoring composition over inheritance. Your question/problem is pretty much the same as the flying fish problem. In this example, how should we handle a creature that can fly and swim? 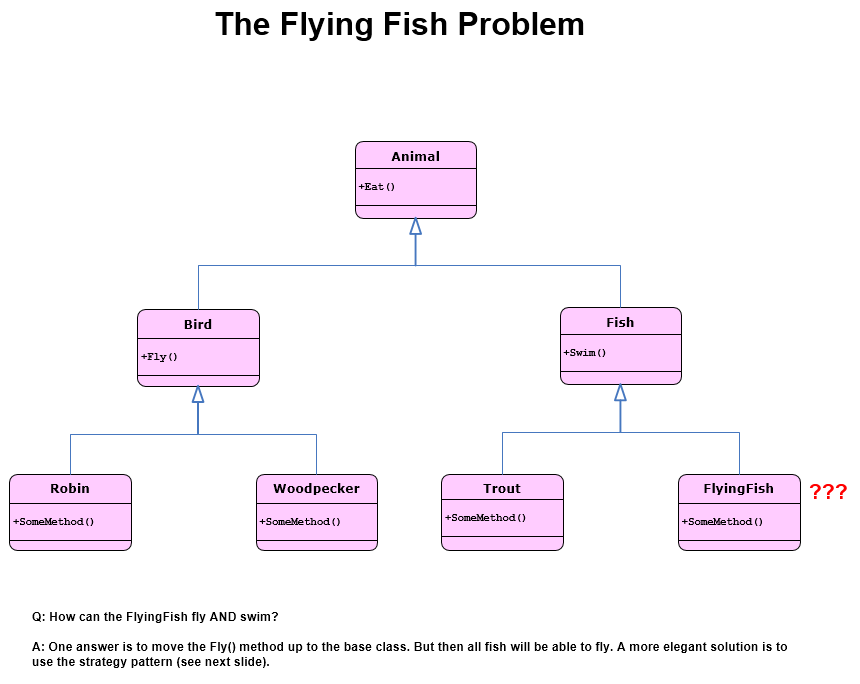 It would be awkward to fit FlyingFish into the inheritance hierarchy. Instead of trying to make that happen, use the power of composition: 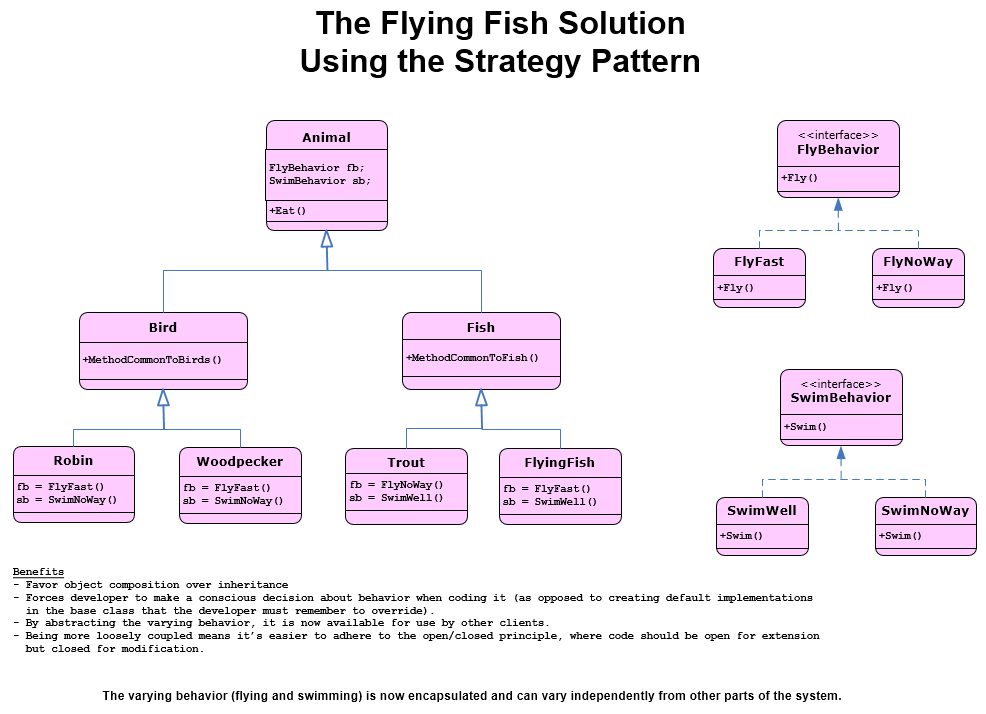 Now, each of the concrete classes can specify their behavior. And this is the appropriate place to do so, based on the information expert principle: Information Expert will lead to placing the responsibility on the class with the most information required to fulfill it.

Note: It's difficult to read the benefits from the above screenshot, so here they are again:

Benefits
- Favor object composition over inheritance
- Forces developer to make a conscious decision about behavior when coding it (as opposed to creating default implementations in the base class that the developer must remember to override).
- By abstracting the varying behavior, it is now available for use by other clients.
- Being more loosely coupled means it’s easier to adhere to the open/closed principle, where code should be open for extension but closed for modification.

In the class Man add hasEyes which is true by default, and in BlindMan make it false by default (or make blind men instantiations of Man that have their eyes robbed immediately after, e.g. a BlindManFactory). Then in Man's See code it so that if he does not have eyes it automatically fails.

you could use boolean

In java, what is a good way to design around a subclass that reduces the functionality of the superclass?

That basically asks "how can inheritance to reduce functionality?". An example of this in Java I can think of is the Collections#unmodifyableList method, which says:

So that's what I would go for when wanting to remove a certain feature. However, make sure that the usage of it is clear, e.g. state in the Javadoc of BlindMan that see() will result in an Exception.

However, If you want to "reduce" more than one feature, maybe independently, and changing them with the time, I would rather use variables than inheritance. In the end, you are not extending the superclass, so why abusing inheritance for this? What you have is a human with different properties.

The behaviour of the methods need to be documented. I could think of the following class for your usecase:

Let the human do things his way, giv him tasks, not commands.

Seeing is part of some activity so let him use sight (or not) independely.

Eg tell him to travel somewhere. Healthy human will use sight, blind man will use other senses and will be less efficient (unless its in total darkness).

If vision is necessary for given task (eg. guard on guard tower) you need to ask how good is their sight (there are not blind people with unsifficently good sight).

Sometimes you want to ask them what they see (and not care what they hear etc.) Then just ask and expect blind (and other visually impaired) to not see anything.

If you want humans to be passive objects and some other object to process them, one not yet mentioned approach is: look at entity-componet programming used in game programming. It basically is using composition in generic way. Entities hold only identity, components holds data about some aspect of entity (eg. sight could be eg. number of dioptries or some more usefull stats) and Systems process sets of entities that have component combination required by given system. Sight system could require sight component and create component seenEntities containing what entities current entity see right now. Other system could merge results from all senses and use it to perform something usefull.

For example, consider the class "Man", that has the function "See" and the subclass "BlindMan" that shouldn't have that function

You don't get it fully right. Blind man has the function "see" which does nothing (because there's no link between sensors and appropriate brain part, or the sensors are not functioning (return empty list of pixels or image of 0 size).

A good analogy: a Writer has function flush(), but what makes that function for StringWriter?

Well, nothing. There's nothing to flush. OK but why the close() throws IOException?

It's not perfect, but the code works for all types of writers, even those for which flush is not relevant.

But wait, even for the seeing man function see() may return null or empty list. For example, when it's too dark. Just check for null/empty values and the code will work fine with that design.

You could throw an Exception in cases where you don't want the function to be called.

e.G. in your scenario: InablityException

And visa versa for the DeafMan.

Same thing works if Man is a class instead of an interface.

You could (and should) combine this with @Pataschu answer https://stackoverflow.com/a/17080626/881272 and throw the Exception if hasWorkingEyes() returns false.

Now, you can combine these interfaces with a "parent" abstract class that has all the default behavior(both blind and seeing ; if you choose too)

To implement a capability, use interface.

To extend or redefine a functionality, use child class by extending base class.

If you want to add behaviour dynamically at run time, implement Decorator pattern.

Implements vs extends: When to use? What's the difference?

When to Use the Decorator Pattern?

Not the answer you're looking for? Browse other questions tagged java oop or ask your own question.

703
Implements vs extends: When to use? What's the difference?
60
When to Use the Decorator Pattern?

1438
Fastest way to determine if an integer's square root is an integer
507
Java multiline string
735
Monad in plain English? (For the OOP programmer with no FP background)
96
When do you need to explicitly call a superclass constructor?
1119
Reference - What does this error mean in PHP?
1365
Why not inherit from List<T>?
1
PHP OOP abstract classes subclass registration