Does anyone know of a tool that can help me figure out why we are seeing runaway CPU in a managed app?

What I am not looking for:

What I am looking for:

Technically I know that a tool like this can be created (using ICorDebug), but do not want to invest any time if such a tool already exists. 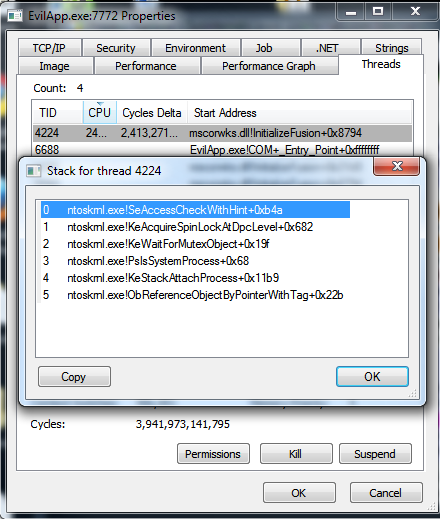 How do you get an unmanaged stack trace for an arbitrary .Net process?

There are two ways you could get managed stack traces for an managed application.

What is better in production?

The CLR Debugging APIs have a very important advantage over the profiling ones, they allow you to attach to a running process. This can be critical when diagnosing performance issues in production. Quite often runaway CPU pops up after days of application use due to some unexpected branch of code executing. At that point of time restarting the app (in order to profile it) is not an option.

So, I wrote a little tool that has no-installer and performs the basic solution above using ICorDebug. Its based off the mdbg source which is all merged into a single exe.

Here is a sample output:

Feel free to give the tool a shot. It can be downloaded from my blog.

Here is a thread showing how I use cpu-analyzer to diagnose such an issue in a production app.

A profiler is probably the correct answer here.

If you don't want a "fully fledged profiler" like DotTrace, you might want to try SlimTune. It works fairly well, and is completely free (and open source).

It does sound like you need a real profiler, but I thought I'd just throw this out there: PerfMon. It comes with windows, you can setup a perfmon profile that you can send to the user, they can capture and send you the log.

Here's a couple links I've kept around every time I need a perfmon refresher: TechNet magazine from 2008 and a post from the Advanced .NET Debugging blog.

I've had luck with the Red Gate Ants profiler. However it does require installation. I'm pretty sure they don't have a remote option.

I know that you specifically said that you didn't want to take complicate dumps and use WinDbg + Sos to analyze those.

However, that may not be necessary. I would suggest using WinDbg anyway, but instead of using dumps, just attach to the process when you see the runaway thread(s). Then all you need to do is run the !runaway command. That will give you the total running time for each thread. The runaway threads will be at the top of the list. Now all you have to do is run the !clrstack for the top thread (or threads as it may be).

E.g. if thread 4 is your primary suspect, do a ~4e!clrstack to get the managed stack for that thread. That should tell you what the runaway thread is doing.

I'll agree that WinDbg is not the easiest tool to use for many things, but this may actually turn out to be pretty simple, so I hope that you'll forgive me for posting something you didn't really what.

If WinDbg is still out of the question, feel free to comment.

Use SysInternals ProcDump to get a mini-dump and windbg+sos to analyse it.

Just send the exe to the user and tell him.her to run (for example):

Use the Managed debugger. Helped me before. Just a few files needed. You could probably just see what is happening (perhaps exception handling stuck in a loop).

If you have managed code in lieu of a profiler worth using I've found that throwing a log message into your code is damn useful for spotting infinite loops and general multi thread progressions.

I think you should look at memory and disk usage as well. If a machine runs out of memory and needs to start using virtual memory (on the disk drive), you'll see a spike in CPU and disk activity. In such conditions what looks like a CPU bottleneck is actually a memory bottleneck.

The worse a problem is, the easier it is to find by this technique.

There is a tool you can get, called Stackshot, that might help in your case. Look here and here.

Not the answer you're looking for? Browse other questions tagged .net performance cpu or ask your own question.

910
Sending email in .NET through Gmail
581
Comparing two byte arrays in .NET
645
How to determine CPU and memory consumption from inside a process?
1053
How to escape braces (curly brackets) in a format string in .NET
2189
Difference between decimal, float and double in .NET?
1020
How can I get the application's path in a .NET console application?
918
How do I force my .NET application to run as administrator?
1052
How do I turn a C# object into a JSON string in .NET?
913
What is the difference between .NET Core and .NET Standard Class Library project types?
721
Your CPU supports instructions that this TensorFlow binary was not compiled to use: AVX AVX2