Current time in microseconds in java

On a Unix system, is there a way to get a timestamp with microsecond level accuracy in Java? Something like C's gettimeofday function.

No, Java doesn't have that ability.

It does have System.nanoTime(), but that just gives an offset from some previously known time. So whilst you can't take the absolute number from this, you can use it to measure nanosecond (or higher) precision.

Note that the JavaDoc says that whilst this provides nanosecond precision, that doesn't mean nanosecond accuracy. So take some suitably large modulus of the return value.

Java 9 and later: Up to nanoseconds resolution when capturing the current moment. That’s 9 digits of decimal fraction.

To limit to microseconds, truncate.

In practice, you will see only microseconds captured with .now as contemporary conventional computer hardware clocks are not accurate in nanoseconds.

The other Answers are somewhat outdated as of Java 8.

Java 8 and later comes with the java.time framework. These new classes supplant the flawed troublesome date-time classes shipped with the earliest versions of Java such as java.util.Date/.Calendar and java.text.SimpleDateFormat. The framework is defined by JSR 310, inspired by Joda-Time, extended by the ThreeTen-Extra project. 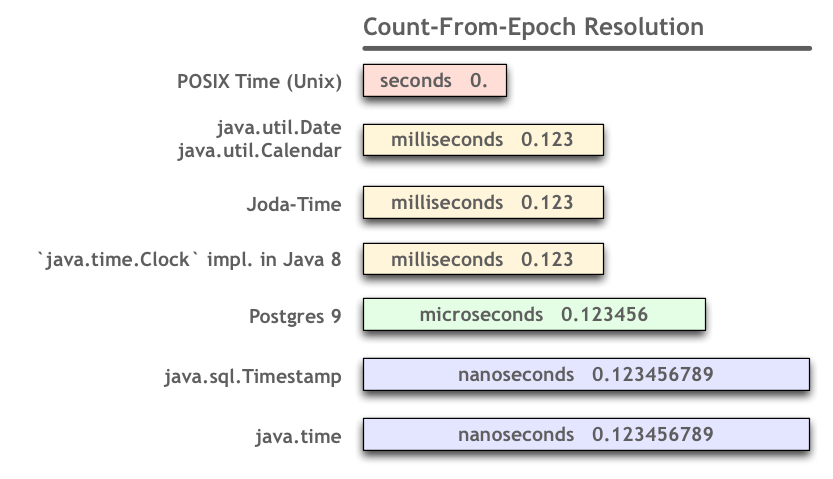 So you could format the textual representation of the result of ZonedDateTime.now( ZoneId.of( "America/Montreal" ) ) to see nine digits of a fractional second but only the first three digits will have numbers like this:

The OpenJDK and Oracle implementations of Java 9 have a new default Clock implementation with finer granularity, up to the full nanosecond capability of the java.time classes.

See the OpenJDK issue, Increase the precision of the implementation of java.time.Clock.systemUTC(). That issue has been successfully implemented.

On a MacBook Pro (Retina, 15-inch, Late 2013) with macOS Sierra, I get the current moment in microseconds (up to six digits of decimal fraction).

Remember that even with a new finer Clock implementation, your results may vary by computer. Java depends on the underlying computer hardware’s clock to know the current moment.

to get time in nanoseconds but it is a strictly relative measure. It has no absolute meaning. It is only useful for comparing to other nano times to measure how long something took to do.

As other posters already indicated; your system clock is probably not synchronized up to microseconds to actual world time. Nonetheless are microsecond precision timestamps useful as a hybrid for both indicating current wall time, and measuring/profiling the duration of things.

I label all events/messages written to a log files using timestamps like "2012-10-21 19:13:45.267128". These convey both when it happened ("wall" time), and can also be used to measure the duration between this and the next event in the log file (relative difference in microseconds).

You could maybe create a component that determines the offset between System.nanoTime() and System.currentTimeMillis() and effectively get nanoseconds since epoch.

The difference seems to oscillate in range of +-3ms. I guess one could tweak the offset calculation a bit more.

Use Instant to compute microseconds since Epoch:

a "quick and dirty" solution that I eventually went with:

I originally went with System.nanoTime but then I found out it should only be used for elapsed time, I eventually changed my code to work with milliseconds or at some places use:

Left this answer here as a "warning sign" in case someone else thinks of nanoTime :)

If you're interested in Linux: If you fish out the source code to "currentTimeMillis()", you'll see that, on Linux, if you call this method, it gets a microsecond time back. However Java then truncates the microseconds and hands you back milliseconds. This is partly because Java has to be cross platform so providing methods specifically for Linux was a big no-no back in the day (remember that cruddy soft link support from 1.6 backwards?!). It's also because, whilst you clock can give you back microseconds in Linux, that doesn't necessarily mean it'll be good for checking the time. At microsecond levels, you need to know that NTP is not realigning your time and that your clock has not drifted too much during method calls.

This means, in theory, on Linux, you could write a JNI wrapper that is the same as the one in the System package, but not truncate the microseconds.

You can get microseconds in java by this way:

You also can convert microseconds back to another time units, for example:

If you intend to use it for realtime system, perhaps java isnt the best choice to get the timestamp. But if youre going to use if for unique key, then Jason Smith's answer will do enough. But just in case, to anticipate 2 item end up getting the same timestamp (its possible if those 2 were processed almost simultaneously), you can loop until the last timestamp not equals with the current timestamp.

Here is an example of how to create an UnsignedLong current Timestamp:

4191
What are the differences between a HashMap and a Hashtable in Java?
7528
Is Java "pass-by-reference" or "pass-by-value"?
4315
Avoiding NullPointerException in Java
4560
How do I read / convert an InputStream into a String in Java?
3961
How do I generate random integers within a specific range in Java?
2300
What's the simplest way to print a Java array?
2589
How do I determine whether an array contains a particular value in Java?
1749
How can I avoid Java code in JSP files, using JSP 2?
3620
How can I create a memory leak in Java?
1106
:: (double colon) operator in Java 8