Optimal number of threads per core

Let's say I have a 4-core CPU, and I want to run some process in the minimum amount of time. The process is ideally parallelizable, so I can run chunks of it on an infinite number of threads and each thread takes the same amount of time.

Since I have 4 cores, I don't expect any speedup by running more threads than cores, since a single core is only capable of running a single thread at a given moment. I don't know much about hardware, so this is only a guess.

Is there a benefit to running a parallelizable process on more threads than cores? In other words, will my process finish faster, slower, or in about the same amount of time if I run it using 4000 threads rather than 4 threads?

If your threads don't do I/O, synchronization, etc., and there's nothing else running, 1 thread per core will get you the best performance. However that very likely not the case. Adding more threads usually helps, but after some point, they cause some performance degradation.

Not long ago, I was doing performance testing on a 2 quad-core machine running an ASP.NET application on Mono under a pretty decent load. We played with the minimum and maximum number of threads and in the end we found out that for that particular application in that particular configuration the best throughput was somewhere between 36 and 40 threads. Anything outside those boundaries performed worse. Lesson learned? If I were you, I would test with different number of threads until you find the right number for your application.

One thing for sure: 4k threads will take longer. That's a lot of context switches.

I agree with @Gonzalo's answer. I have a process that doesn't do I/O, and here is what I've found: 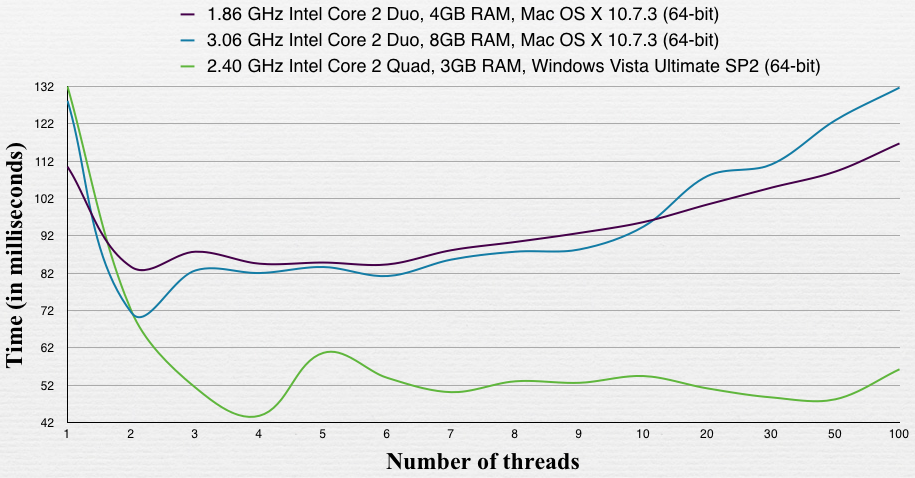 Note that all threads work on one array but different ranges (two threads do not access the same index), so the results may differ if they've worked on different arrays.

In this test, the optimal number was equal to the number of cores in the machine.

I know this question is rather old, but things have evolved since 2009.

With Intel processors, the number of threads is defined by the Hyperthreading which is just 2 (when available). But Hyperthreading cuts your execution time by two, even when not using 2 threads! (i.e. 1 pipeline shared between two processes -- this is good when you have more processes, not so good otherwise. More cores are definitively better!) Note that modern CPUs generally have more pipelines to divide the workload, so it's no really divided by two anymore. But Hyperthreading still shares a lot of the CPU units between the two threads (some call those logical CPUs).

On other processors you may have 2, 4, or even 8 threads. So if you have 8 cores each of which support 8 threads, you could have 64 processes running in parallel without context switching.

"No context switching" is obviously not true if you run with a standard operating system which will do context switching for all sorts of other things out of your control. But that's the main idea. Some OSes let you allocate processors so only your application has access/usage of said processor!

From my own experience, if you have a lot of I/O, multiple threads is good. If you have very heavy memory intensive work (read source 1, read source 2, fast computation, write) then having more threads doesn't help. Again, this depends on how much data you read/write simultaneously (i.e. if you use SSE 4.2 and read 256 bits values, that stops all threads in their step... in other words, 1 thread is probably a lot easier to implement and probably nearly as speedy if not actually faster. This will depend on your process & memory architecture, some advanced servers manage separate memory ranges for separate cores so separate threads will be faster assuming your data is properly filed... which is why, on some architectures, 4 processes will run faster than 1 process with 4 threads.)

Please read my article regarding calculations of the optimal number for various algorithms: pavelkazenin.wordpress.com

The actual performance will depend on how much voluntary yielding each thread will do. For example, if the threads do NO I/O at all and use no system services (i.e. they're 100% cpu-bound) then 1 thread per core is the optimal. If the threads do anything that requires waiting, then you'll have to experiment to determine the optimal number of threads. 4000 threads would incur significant scheduling overhead, so that's probably not optimal either.

I thought I'd add another perspective here. The answer depends on whether the question is assuming weak scaling or strong scaling.

Weak scaling: how the solution time varies with the number of processors for a fixed problem size per processor.

Strong scaling: how the solution time varies with the number of processors for a fixed total problem size.

If the question is assuming weak scaling then @Gonzalo's answer suffices. However if the question is assuming strong scaling, there's something more to add. In strong scaling you're assuming a fixed workload size so if you increase the number of threads, the size of the data that each thread needs to work on decreases. On modern CPUs memory accesses are expensive and would be preferable to maintain locality by keeping the data in caches. Therefore, the likely optimal number of threads can be found when the dataset of each thread fits in each core's cache (I'm not going into the details of discussing whether it's L1/L2/L3 cache(s) of the system).

This holds true even when the number of threads exceeds the number of cores. For example assume there's 8 arbitrary unit (or AU) of work in the program which will be executed on a 4 core machine.

Case 1: run with four threads where each thread needs to complete 2AU. Each thread takes 10s to complete (with a lot of cache misses). With four cores the total amount of time will be 10s (10s * 4 threads / 4 cores).

Case 2: run with eight threads where each thread needs to complete 1AU. Each thread takes only 2s (instead of 5s because of the reduced amount of cache misses). With four cores the total amount of time will be 4s (2s * 8 threads / 4 cores).

I've simplified the problem and ignored overheads mentioned in other answers (e.g., context switches) but hope you get the point that it might be beneficial to have more number of threads than the available number of cores, depending on the data size you're dealing with.

4000 threads at one time is pretty high.

The answer is yes and no. If you are doing a lot of blocking I/O in each thread, then yes, you could show significant speedups doing up to probably 3 or 4 threads per logical core.

You should that the four thread case is optimal, with slight rises in runtime after that, but maybe not. It may be that your application is bandwidth limited, ie, the dataset you're loading into memory is huge, you're getting lots of cache misses, etc, such that 2 threads are optimal.

You can't know until you test.

You can use man page about 'ps' command.

If you want to calculate number of all users process, you can use one of these commands:

Calculating number of an user process:

Also, you can use "htop" [Reference]:

Installing on Ubuntu or Debian:

Installing on Redhat or CentOS:

If you want to compile htop from source code, you will find it here.

The ideal is 1 thread per core, as long as none of the threads will block.

One case where this may not be true: there are other threads running on the core, in which case more threads may give your program a bigger slice of the execution time.

One example of lots of threads ("thread pool") vs one per core is that of implementing a web-server in Linux or in Windows.

Since sockets are polled in Linux a lot of threads may increase the likelihood of one of them polling the right socket at the right time - but the overall processing cost will be very high.

In Windows the server will be implemented using I/O Completion Ports - IOCPs - which will make the application event driven: if an I/O completes the OS launches a stand-by thread to process it. When the processing has completed (usually with another I/O operation as in a request-response pair) the thread returns to the IOCP port (queue) to wait for the next completion.

If no I/O has completed there is no processing to be done and no thread is launched.

Indeed, Microsoft recommends no more than one thread per core in IOCP implementations. Any I/O may be attached to the IOCP mechanism. IOCs may also be posted by the application, if necessary.

But it also depends on your architecture. From where I heard Niagara processors are suppose to be able to handle multiple threads on a single core using some kind of advanced pipelining technique. However I have no experience with those processors.

Hope this makes sense, Check the CPU and Memory utilization and put some threshold value. If the threshold value is crossed,don't allow to create new thread else allow...

0
Java multithreading - 6 threads or 30 threads?
-1
Number of threads vs processor core?
-4
Threads, why 1000 threads and 2000 threads does not make much noticeable difference
0
Optimal number of threads
0
How many concurrent threads can be opened on a quad core CPU in java, what is the rule?
18
Has anyone tried using the UV_THREADPOOL_SIZE environment variable?
10
CPU usage vs Number of threads
7
How to manage more than 32k threads
8
Choosing optimal number of Threads for parallel processing of data
8
What are the practical limit of threads per CPU?
See more linked questions

1
Assign threads to run on a custom Core in Unix
8
How to do the same calculations faster on 4-core CPU: 4 threads or 50 threads?
1
Ensuring all Linux system threads run on core 0
2
Threads per JVM or per CPU cores
416
What is the difference between asynchronous programming and multithreading?
12
How does Spark achieve parallelism within one task on multi-core or hyper-threaded machines
1
Performance analysis of CPUs for parallel executions
14
How to make multi-threading in Julia scale with the number of threads?
1
Optimal number of parallel processes for computation with a CPU with 6 cores and 12 threads