Why use softmax as opposed to standard normalization?

In the output layer of a neural network, it is typical to use the softmax function to approximate a probability distribution:

This is expensive to compute because of the exponents. Why not simply perform a Z transform so that all outputs are positive, and then normalise just by dividing all outputs by the sum of all outputs?

There is one nice attribute of Softmax as compared with standard normalisation.

It react to low stimulation (think blurry image) of your neural net with rather uniform distribution and to high stimulation (ie. large numbers, think crisp image) with probabilities close to 0 and 1.

While standard normalisation does not care as long as the proportion are the same.

Have a look what happens when soft max has 10 times larger input, ie your neural net got a crisp image and a lot of neurones got activated

And then compare it with standard normalisation

I've had this question for months. It seems like we just cleverly guessed the softmax as an output function and then interpret the input to the softmax as log-probabilities. As you said, why not simply normalize all outputs by dividing by their sum? I found the answer in the Deep Learning book by Goodfellow, Bengio and Courville (2016) in section 6.2.2.

Let's say our last hidden layer gives us z as an activation. Then the softmax is defined as

The exp in the softmax function roughly cancels out the log in the cross-entropy loss causing the loss to be roughly linear in z_i. This leads to a roughly constant gradient, when the model is wrong, allowing it to correct itself quickly. Thus, a wrong saturated softmax does not cause a vanishing gradient.

Now, we only focus on the softmax here with z already given, so we can replace

with i being the correct class of the kth sample. Now, we see that when we take the logarithm of the softmax, to calculate the sample's log-likelihood, we get:

, which for large differences in z roughly approximates to

First, we see the linear component z_i here. Secondly, we can examine the behavior of max(z) for two cases:

We see that the overall log-likelihood will be dominated by samples, where the model is incorrect. Also, even if the model is really incorrect, which leads to a saturated softmax, the loss function does not saturate. It is approximately linear in z_j, meaning that we have a roughly constant gradient. This allows the model to correct itself quickly. Note that this is not the case for the Mean Squared Error for example.

If the softmax still seems like an arbitrary choice to you, you can take a look at the justification for using the sigmoid in logistic regression:

Why sigmoid function instead of anything else?

The softmax is the generalization of the sigmoid for multi-class problems justified analogously.

I have found the explanation here to be very good: CS231n: Convolutional Neural Networks for Visual Recognition.

On the surface the softmax algorithm seems to be a simple non-linear (we are spreading the data with exponential) normalization. However, there is more than that.

Specifically there are a couple different views (same link as above):

In summary, even though the softmax equation seems like it could be arbitrary it is NOT. It is actually a rather principled way of normalizing the classifications to minimize cross-entropy/negative likelihood between predictions and the truth.

The values of q_i are unbounded scores, sometimes interpreted as log-likelihoods. Under this interpretation, in order to recover the raw probability values, you must exponentiate them.

Another reason is that log-likelihoods occur naturally when deriving estimators for random variables that are assumed to be drawn from multivariate Gaussian distributions. See for example the Maximum Likelihood (ML) estimator and the way it is connected to least squares.

If you believe the problem can be modelled by another distribution, other than multinomial, then you could reach a conclusion that is different from softmax.

Additionally, a useful trick usually performs to softmax is: softmax(x) = softmax(x+c), softmax is invariant to constant offsets in the input.

The choice of the softmax function seems somehow arbitrary as there are many other possible normalizing functions. It is thus unclear why the log-softmax loss would perform better than other loss alternatives.

From "An Exploration of Softmax Alternatives Belonging to the Spherical Loss Family" https://arxiv.org/abs/1511.05042

The authors explored some other functions among which are Taylor expansion of exp and so called spherical softmax and found out that sometimes they might perform better than usual softmax.

I think one of the reasons can be to deal with the negative numbers and division by zero, since exp(x) will always be positive and greater than zero. 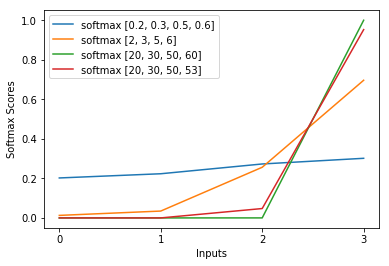 where c is a positive constant. Note that c=1 corresponds to the standard softmax function. But if we use a different value of c we get a different function, which is nonetheless qualitatively rather similar to the softmax. In particular, show that the output activations form a probability distribution, just as for the usual softmax. Suppose we allow c to become large, i.e., c→∞. What is the limiting value for the output activations a^L_j? After solving this problem it should be clear to you why we think of the c=1 function as a "softened" version of the maximum function. This is the origin of the term "softmax". You can follow the details from this source (equation 83).

While it indeed somewhat arbitrary, the softmax has desirable properties such as:

Not the answer you're looking for? Browse other questions tagged math neural-network softmax or ask your own question.

450
What are logits? What is the difference between softmax and softmax_cross_entropy_with_logits?
2
Is softmax used when only the most probable class will be used?
0
Stable Softmax function returns wrong output
1
Logistic Regression to support multiple classes directly
1
How is this simple Keras neural-network calculating result?
0
how softmax differs from finding the average of each value from total value?

286
How to implement the Softmax function in Python
329
Extremely small or NaN values appear in training neural network
3
Why is softmax function necessory? Why not simple normalization?
0
Apply softmax on a subset of neurons
0
Normalize output without Softmax
5
Activity regularizer with softmax?