Ask Question
Asked 10 years, 8 months ago
Active 2 years, 8 months ago
Viewed 19k times
73
votes
Locked. This question and its answers are locked because the question is off-topic but has historical significance. It is not currently accepting new answers or interactions.

Following on from my breathless confusion, what are some good resources which explain how the new Scala 2.8 collections library has been structured. I'm interested to find some information on how the following fit together:

There's a 2.8 collection walk-through by Martin Odersky which should probably be your first reference. It has been supplemented as well with architectural notes, which will be of particular interest to those who want to design their own collections.

The rest of this answer was written way before any such thing existed (in fact, before 2.8.0 itself was released).

You can find a paper about it as Scala SID #3. Other papers in that area should be interesting as well to people interested in the differences between Scala 2.7 and 2.8.

I'll quote from the paper, selectively, and complement with some thoughts of mine. There are also some images, generated by Matthias at decodified.com, and the original SVG files can be found here.

There's also a distinction between parallel, serial and maybe-parallel collections, which was introduced with Scala 2.9. I'll talk about them in the next section. The hierarchy described in this section refers exclusively to non-parallel collections.

The following image shows the non-specific hierarchy introduced with Scala 2.8: 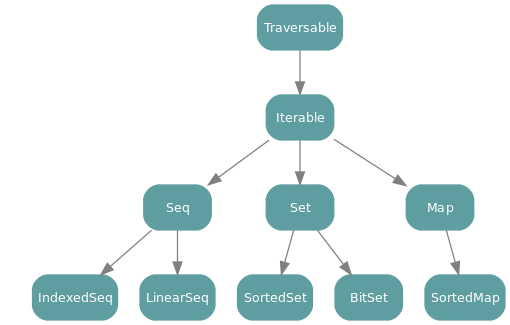 All elements shown are traits. In the other two hierarchies there are also classes directly inheriting the traits as well as classes which can be viewed as belonging in that hierarchy through implicit conversion to wrapper classes. The legend for these graphs can be found after them. 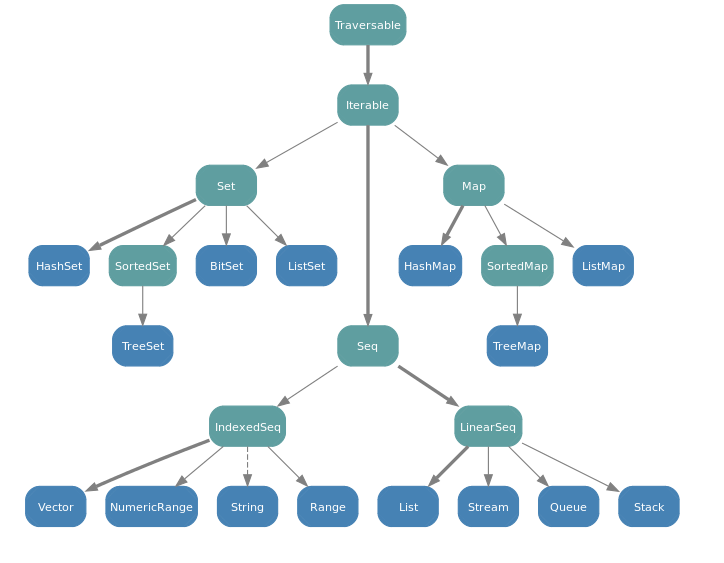 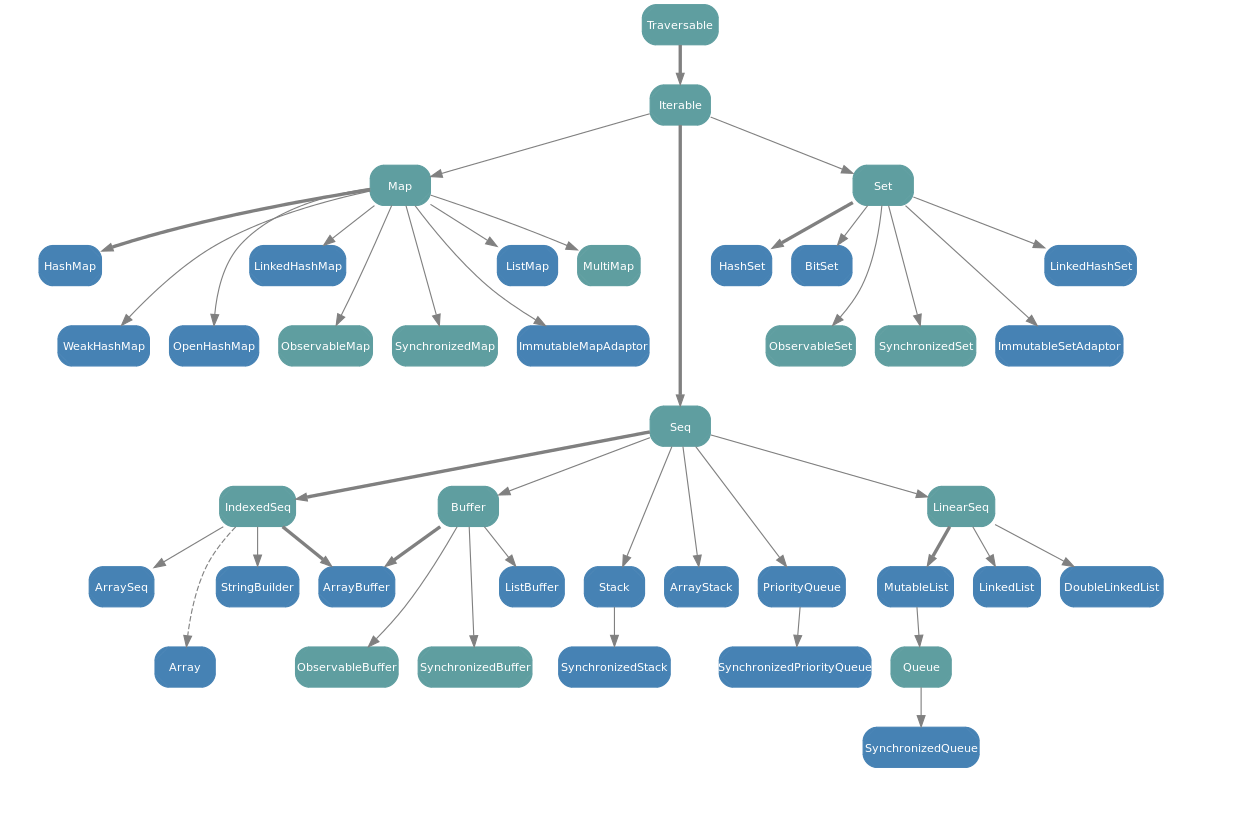 Here's an abbreviated ASCII depiction of the collection hierarchy, for those who can't see the images.

When Scala 2.9 introduced parallel collections, one of the design goals was to make their use as seamless as possible. In the simplest terms, one can replace a non-parallel (serial) collection with a parallel one, and instantly reap the benefits.

However, since all collections until then were serial, many algorithms using them assumed and depended on the fact that they were serial. Parallel collections fed to the methods with such assumptions would fail. For this reason, all the hierarchy described in the previous section mandates serial processing.

Two new hierarchies were created to support the parallel collections.

The parallel collections hierarchy has the same names for traits, but preceded with Par: ParIterable, ParSeq, ParMap and ParSet. Note that there is no ParTraversable, since any collection supporting parallel access is capable of supporting the stronger ParIterable trait. It doesn't have some of the more specialized traits present in the serial hierarchy either. This whole hierarchy is found under the directory scala.collection.parallel.

Given the way these hierarchies were structured, code written for Scala 2.8 was fully compatible with Scala 2.9, and demanded serial behavior. Without being rewritten, it cannot take advantage of parallel collections, but the changes required are very small.

If the collection was already of the type requested (parallel or serial), no conversion will take place. If one calls seq on a parallel collection or par on a serial collection, however, a new collection with the requested characteristic will be generated.

While there are many implementing classes and subtraits, there are some basic traits in the hierarchy, each of which providing more methods or more specific guarantees, but reducing the number of classes that could implement them.

In the following subsections, I'll give a brief description of the main traits and the idea behind them.

This trait is pretty much like trait Traversable described below, but with the limitation that you can only use it once. That is, any methods called on a TraversableOnce may render it unusable.

Because TraversableOnce unifies collections and iterators, it does not appear in the previous graphs, which concern themselves only with collections.

At the top of the collection hierarchy is trait Traversable. Its only abstract operation is

The operation is meant to traverse all elements of the collection, and apply the given operation f to each element. The application is done for its side effect only; in fact any function result of f is discarded by foreach.

Traversible objects can be finite or infinite. An example of an infinite traversable object is the stream of natural numbers Stream.from(0). The method hasDefiniteSize indicates whether a collection is possibly infinite. If hasDefiniteSize returns true, the collection is certainly finite. If it returns false, the collection has not been not fully elaborated yet, so it might be infinite or finite.

This class defines methods which can be efficiently implemented in terms of foreach (over 40 of them).

This trait declares an abstract method iterator that returns an iterator that yields all the collection’s elements one by one. The foreach method in Iterable is implemented in terms of iterator. Subclasses of Iterable often override foreach with a direct implementation for efficiency.

Class Iterable also adds some less-often used methods to Traversable, which can be implemented efficiently only if an iterator is available. They are summarized below.

After Iterable there come three base traits which inherit from it: Seq, Set, and Map. All three have an apply method and all three implement the PartialFunction trait, but the meaning of apply is different in each case.

I trust the meaning of Seq, Set and Map is intuitive. After them, the classes break up in specific implementations that offer particular guarantees with regards to performance, and the methods it makes available as a result of it. Also available are some traits with further refinements, such as LinearSeq, IndexedSeq and SortedSet.

The listing below may be improved. Leave a comment with suggestions and I'll fix it.

Base Classes and Traits

This was done to achieve maximum code reuse. The concrete generic implementation for classes with a certain structure (a traversable, a map, etc) is done in the Like classes. The classes intended for general consumption, then, override selected methods that can be optmized.

While there might be some use for such method in normal programs, its target is enabling code reuse in the collection library.

You aren't supposed to care about that. They are implicit precisely so that you don't need to figure out how to make it work.

These implicits exists to enable the methods on the collections to be defined on parent classes but still return a collection of the same type. For example, the map method is defined on TraversableLike, but if you used on a List you'll get a List back.

Not the answer you're looking for? Browse other questions tagged scala scala-collections scala-2.8 or ask your own question.

60
How are Scala collections able to return the correct collection type from a map operation?
27
Scala 2.8 CanBuildFrom
8
Scala: what is trait TraversableOnce? What's the different between TraversableOnce and Traversable?
7
What instance of CanBuildFrom does the Scala compiler find out?
6
How do I form the union of scala SortedMaps?
4
Generic way to refer to “list” in Scala?
5
IndexedSeq[Int] vs Array[Int]
4
How do I deal with Scala collections generically?
3
Scala Collections Library Inheritance
1
Iterating immutable Seq, Vector and List: any differences?
See more linked questions