Can I squash commits in Mercurial?

I have a pair of commits that should really be just one. If I was using git, I would use:

and then squash them.

Can I do that in mercurial? If so, how?

Yes, you can do this using mercurial without any extensions by Concatenating Changesets.

Alternately if you want to use an extension you could use:

My favourite is hg strip <commit_hash> --keep command. And then I commit all changes in one commit.

It is the fastest and most comfortable way for me, because I like to do many small commits during my daily work ;)

Note 1: strip needs a built-in extension mq to be enabled.
Note 2: My favourite Git/ Mercurial client (SmartGit/Hg) appends by default --keep parameter during strip. And what is even more convenient: it provides option called join commits :]

The Rebase extension worked like a charm. To squash 2 commits:

Dot is a shortcut for current revision.

It's even easier when you have a few commits on a branch and want to collapse them all into one: 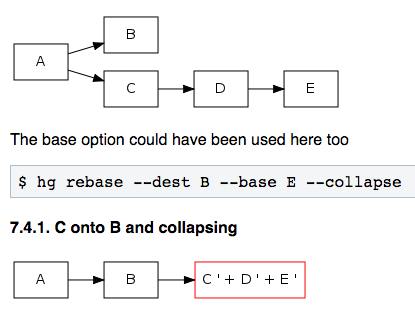 If you are reading this answer, you can forget every other option mentioned in this answer and use the fold command from the evolve extension.

evolve is an extension of mercurial which helps us in having safe mutable history, it's still experimental though. You can use it by cloning it from its repo and adding it in your .hgrc like this.

Assuming that you cloned evolve repo in your home directory. Now you are good to go. You can also look for help by hg help fold.

You tell fold to squash/fold a linear chain of commits which is not broken. What fold does is, it creates a new changeset which contains changes from all the changesets and mark all those commits as obsolete. You can have a more deep view into this at docs.

Now suppose you have the following history.

You want to squash e, f and g. You can do

The result will be

where h is the changeset which contains changes from all the three commits e, f and g.

You can also fold changesets from the middle of the history, i.e. not necessarily you have to pick a chain which includes the tip. Suppose you want to fold b, c and d. You can do

This will result in

where i is the folded changeset of b, c, d and j is the same changeset as h. Evolve user guide is a must read.

With Mercurial 4.8 (Nov. 2018, 9 years later), you could consider the new command hg absorb (it was an experimental feature before).

The automatic rewriting logic of hg absorb is implemented by following the history of lines: This is fundamentally different from the approach taken by hg histedit or git rebase, which tend to rely on merge strategies based on the 3-way merge to derive a new version of a file given multiple input versions.

This approach combined with the fact that hg absorb skips over changes with an ambiguous application commit means that hg absorb will never encounter merge conflicts!

Now, you may be thinking if you ignore lines with ambiguous application targets, the patch would always apply cleanly using a classical 3-way merge. This statement logically sounds correct. But it isn't: hg absorb can avoid merge conflicts when the merging performed by hg histedit or git rebase -i would fail.

You can run hg chistedit -r b4a738a4 to edit history back to b4a738a4. In chistedit you then cursor down to 1e21c4b1 and hit r to indicate you want to roll that revision. Do note that the order in histedit (oldest to newest) is reversed from hg log (newest to oldest).

After choosing your changes, you then choose c to commit them. The result is the following:

If you are relatively new to them, then histedit can be a better choice than chistedit because it provides the command descriptions in histedit file for reference. It just takes a bit more editing to set the commands using normal text editing (just like normal rebase).

Note, to use either histedit or chistedit you need to add histedit to your extensions in your ~/.hgrc:

I suggested chistedit since it is closest to rebase -i and works anywhere in the history. If you really just want subsume/tweak the current revision into the previous one then @G. Demecki's strip suggestion can be good since what is happening is clear. It is built in since Mercuria 2.8. To get the equivalent results as above you can do the following:

Note strip, like histedit, needs to be enabled in your ~/.hgrc:

Let's assume you want to squash (unite) 2 most recent commits.

strip requires a built-in extension to be enabled. Create/edit ~/.hgrc config file with the following content:

Not the answer you're looking for? Browse other questions tagged mercurial or ask your own question.

230
Why is a 3-way merge advantageous over a 2-way merge?
96
With Mercurial, how can I "compress" a series of changesets into one before pushing?
5
Should I squash small, development commits into bigger ones?
4
Bundle commits / keep commits private on push
3
Moving incomplete code between mercurial checkouts
0
How to remove a changeset from hg repo without loosing changesets commited after that
1
Fold outgoing changesets into a single changeset in mercurial
0
Mercurial: Pushing a changeset without its ancestor

307
How to search through all Git and Mercurial commits in the repository for a certain string?
203
Git interoperability with a Mercurial Repository
237
Mercurial for Beginners: The Definitive Practical Guide
524
Git and Mercurial - Compare and Contrast
221
Is there any way to delete local commits in Mercurial?
409
How and/or why is merging in Git better than in SVN?
211
Hg: How to do a rebase like git's rebase
220
Mercurial: how to amend the last commit?
144
Converting Mercurial folder to a Git repository