I can imagine, that recalculating indices for 1D arrays (y + x*n) could be slower than using 2D array (x, y) but I could image that 1D could be in CPU cache..

I did some googling, but only found pages regarding static array (and stating that 1D and 2D are basically the same). But my arrays must me dynamic.

tl;dr : You should probably use a one-dimensional approach.

Note: One cannot dig into detail affecting performance when comparing dynamic 1d or dynamic 2d storage patterns without filling books since the performance of code is dependent one a very large number of parameters. Profile if possible.

For dense matrices the 1D approach is likely to be faster since it offers better memory locality and less allocation and deallocation overhead.

I laid out a pretty long answer beneath with several reasons but I want to make some remarks on your assumptions first.

I can imagine, that recalculating indices for 1D arrays (y + x*n) could be slower than using 2D array (x, y)

The (non-inlined) assembly generated by Visual Studio 2015 RC for those functions (with optimizations turned on) is:

This brings us to the next (and more interesting) point:

True, but 2d could be in CPU cache, too. See The Downsides: Memory locality for an explanation why 1d is still better.

The long answer, or why dynamic 2 dimensional data storage (pointer-to-pointer or vector-of-vector) is "bad" for simple / small matrices.

Note: This is about dynamic arrays/allocation schemes [malloc/new/vector etc.]. A static 2d array is a contiguous block of memory and therefore not subject to the downsides I'm going to present here.

For this “matrix” you allocate one block of four pointers and four blocks of four integers. All of the allocations are unrelated and can therefore result in an arbitrary memory position.

The following image will give you an idea of how the memory may look like.

For the real 2d case: 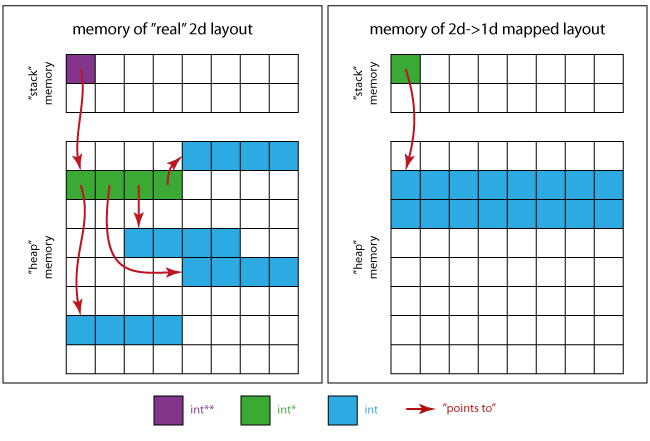 This means that (when using the left layout) you will probably observe worse performance than for a contiguous storage pattern (as seen on the right), due to caching for instance.

Let's say a cache line is "the amount of data transfered into the cache at once" and let's imagine a program accessing the whole matrix one element after another.

If you have a properly aligned 4 times 4 matrix of 32 bit values, a processor with a 64 byte cache line (typical value) is able to "one-shot" the data (4*4*4 = 64 bytes). If you start processing and the data isn't already in the cache you'll face a cache miss and the data will be fetched from main memory. This load can fetch the whole matrix at once since it fits into a cache line, if and only if it is contiguously stored (and properly aligned). There will probably not be any more misses while processing that data.

In case of a dynamic, "real two-dimensional" system with unrelated locations of each row/column, the processor needs to load every memory location seperately. Eventhough only 64 bytes are required, loading 4 cache lines for 4 unrelated memory positions would -in a worst case scenario- actually transfer 256 bytes and waste 75% throughput bandwidth. If you process the data using the 2d-scheme you'll again (if not already cached) face a cache miss on the first element. But now, only the first row/colum will be in the cache after the first load from main memory because all other rows are located somewhere else in memory and not adjacent to the first one. As soon as you reach a new row/column there will again be a cache miss and the next load from main memory is performed.

Long story short: The 2d pattern has a higher chance of cache misses with the 1d scheme offering better potential for performance due to locality of the data.

Therefore, it is more costly to create/copy such matrices in contrast to a single allocation scheme.

This is getting even worse with a growing number of rows.

I'll asumme a size of 32 bits for int and 32 bits for pointers. (Note: System dependency.)

Let's remember: We want to store a 4×4 int matrix which means 64 bytes.

For a NxM matrix, stored with the presented pointer-to-pointer scheme we consume

In addition -depending on the used allocator- each single allocation may well (and most likely will) have another 16 bytes of memory overhead. (Some “Infobytes” which store the number of allocated bytes for the purpose of proper deallocation.)

This means the worst case is:

The share of the overhead will reduce as the size of the matrix grows but will still be present.

The bunch of allocations requires an appropriate exception handling in order to avoid memory leaks if one of the allocations will fail! You’ll need to keep track of allocated memory blocks and you must not forget them when deallocating the memory.

If new runs of of memory and the next row cannot be allocated (especially likely when the matrix is very large), a std::bad_alloc is thrown by new.

In the above mentioned new/delete example, we'll face some more code if we want to avoid leaks in case of bad_alloc exceptions.

There are cases where "real 2d" memory layouts fit and make sense (i.e. if the number of columns per row is not constant) but in the most simple and common 2D data storage cases they just bloat the complexity of your code and reduce the performance and memory efficiency of your program.

You should use a contiguous block of memory and map your rows onto that block.

To provide an idea of how such a class may look like, here's a simple example with some basic features:

So you don't have to bother about proper memory handling for each application but only once for the class you write.

There may be cases where a dynamic "real" two dimensional structure is favourable. This is for instance the case if

Unless you are talking about static arrays, 1D is faster.

Clearly the 2D case loses the cache locality and uses more memory. It also introduces an extra indirection (and thus an extra pointer to follow) but the first array has the overhead of calculating the indices so these even out more or less.

Use what works and seems most logical, and if you face speed problems, then refactor.

The existing answers all only compare 1-D arrays against arrays of pointers.

In C (but not C++) there is a third option; you can have a contiguous 2-D array that is dynamically allocated and has runtime dimensions:

I would expect this to have very similar performance to the 1-D array case, but it gives you nicer syntax for accessing the cells.

In C++ you can achieve something similar by defining a class which maintains a 1-D array internally, but can expose it via 2-D array access syntax using overloaded operators. Again I would expect that to have similar or identical performance to the plain 1-D array.

Another difference of 1D and 2D arrays appears in memory allocation. We cannot be sure that members of 2D array be sequental.

It really depends on how your 2D array is implemented.

consider the code below:

There are 3 implementations here: b, c and d

There won't be a lot of difference accessing b[x][y] or a[x*20 + y], since one is you doing the computation and the other is the compiler doing it for you. c[x][y] and d[x][y] are slower, because the machine has to find the address that c[x] points to and then access the yth element from there. It is not one straight computation. On some machines (eg AS400 which has 36 byte (not bit) pointers), pointer access is extremely slow. It all depends on the architecture in use. On x86 type architectures, a and b are the same speed, c and d are slower than b.

I love the thorough answer provided by Pixelchemist. A simpler version of this solution may be as follows. First, declare the dimensions:

Next, create an alias and, get and set methods:

Finally, a vector may be created and indexed as follows:

Defining the vector size at initialization provides optimal performance. This solution is modified from this answer. The functions may be overloaded to support varying dimensions with a single vector. The downside of this solution is that the M, N, P parameters are implicitly passed to the get and set functions. This can be resolved by implementing the solution within a class, as done by Pixelchemist.

Not the answer you're looking for? Browse other questions tagged c++ c arrays or ask your own question.

-3
using 2-dimensional arrays is faster than two of 1-dimensional arrays?
1
Why 2D arrays run significantly slower than 1D arrays in java
0
Two-dimensional array vs projection onto a one-dimensional with a calculated index: which is faster?
0
2d array and 1d array storage comparison?
1
Accessing a matrix using single pointer Vs double pointer
0
In C++ is it looping through a 1D array faster than a 2D array?
2332
What is The Rule of Three?
360
What is meant by Resource Acquisition is Initialization (RAII)?
17
c++ Vector, what happens whenever it expands/reallocate on stack?
11
What is the most efficient way to initialize a 3D vector?
See more linked questions